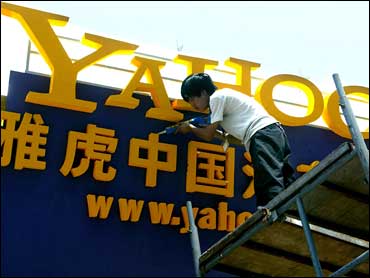 Richard Grenell is a Yahoo shareholder and served as the United States Spokesman at the UN from 2001-2008.


Jerry Yang, the co-founder of Yahoo, born Yáng Zhìyuǎn and one of the most successful and well-known Chinese-Americans, has missed an opportunity to speak out on behalf of the people in the country of his birth - China. In fact, as one of the modern day creators of electronic communications, Yang recently disappointed thousands of Chinese seeking greater freedoms by not pushing the multi-million dollar company he created to follow Google's lead and make the Internet more accessible -- without censorship -- to the people of China.

Around the same time Yang immigrated to the United States from Taiwan, a young man from Moscow also came with his family to a freer society, this time from Communist Russia. Sergey Brin, whose family experienced firsthand the limits of a controlling government and the new freedoms of living in America, arrived in the United States in 1979 at the age of 6. Yang, by then, was 11. No one knew in the late 1970's that a young Chinese-American in California and a young Russian-American in Maryland would forever change how the world communicated. Brin grew up to co-found Google and directly compete with Yang's Yahoo.

But Brin, perhaps recalling his own youth or his parents' stories of a controlling government, led Google to recently announce it would no longer allow the government of China to automatically censor Chinese Google searches. In an overdue but courageous move, Google has taken a stand against Communist China. Google stepped out and made a bold move in the country of Yang's birth. And Yahoo didn't follow.

Yang and Brin are multi-millionaire competitors with more in common than just large bank accounts from the technologies they created. Both understand the nature of repression practiced by dictatorial regimes. So it is perplexing, particularly to the Chinese people and to human rights activists, that Yahoo hasn't followed Google's lead. While Brin partnered with his chief executive to make a stand for freedom, Yang appears to be either silent or silenced in attempts to steer Yahoo's current CEO, Carol Bartz, in the right direction.

The question being asked by many human rights activists is what will Yahoo do, if anything? There is no question that Google will surely lose customers and take a financial hit for standing up to the government censors in China. But will Yahoo take advantage of Google's situation by aggressively marketing their products and services to the millions of Chinese worried about government interference in their lives? Will Yahoo increase their market share in China at the expense of Google's brave human rights step?

There remains an incredible opportunity for Yahoo to follow Google and send a powerful one-two punch to the Chinese government. China understands economics more than most countries and is usually moved to increase freedoms when the Yuan is directly involved. Imagine if Yahoo followed Google's lead and created a tidal wave of information that flowed over the tops of government censors in Beijing. Billions of people would be affected. Literally, billions.

For Yahoo and Yang there is much more at stake than just profits. Every once in a while, brave companies step out and act in ways that move customers and shareholders to also act in good faith. Altruism, especially involving basic freedoms, can be what shareholders value most. Especially when their leaders know first-hand what it's like to live without them.

By Richard Grenell
Special to CBSNews.com