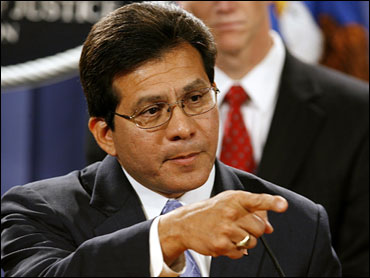 
As unceremoniously as it unveiled, it was killed. In a two-page letter to members of the Senate Judiciary Committee, Attorney General Alberto Gonzales announced the death of the Terrorist Surveillance Program, the super-secret program authorized by the president to eavesdrop on phone calls and e-mails of Americans believed to be communicating with suspected terrorists.

For the past 13 months, since The New York Times broke the news that the program existed, the Bush Administration vehemently defended it. From the president on down, every official called it "critical," "vital," and "crucial to our national security." So what happened?

As one senior Justice Department official said, "obviously, this issue of the terrorist surveillance program is one that has been under intense public debate and scrutiny ... considering all of these circumstances, the President determined that this was the appropriate course."

Until the announcement on Wednesday, the surveillance was at the behest of the National Security Agency, which had carte blanche to monitor electronic communication of anyone who from within this country was communicating with suspected terrorists around the globe. The NSA did not have to check with anyone, much less a judge, to start a wiretap of an American citizen. This "warrantless" system came under sharp criticism, especially from civil liberties advocates.

After digging in its heels, the Bush administration came to the conclusion that there was no more digging to be done and ended the program — but not the surveillance. The surveillance will continue under the watchful eye of a special secret court in Washington, called the Foreign Intelligence Surveillance Act (FISA) court, the sole purpose of which is to monitor the government's wiretapping and monitoring of Americans.

Critics of the NSA program had said from the beginning that FISA should handle the program in the first place. Yet the government argued that going through the FISA court took too long; they said it would impede the program's "speed and agility." They argued that the NSA, the government's eyes and ears of worldwide communication, needed to be able to listen to terror suspects as they moved throughout the world and communicated with people within the U.S.

Now, it appears that the "speed and agility" issue is a moot point.

"We believe the court's orders will allow the necessary speed and agility the government needs," said Gonzales.

When asked if the court is now a 24-hour drivethru for electronic surveillance, a senior Justice official said that "the judges of the FISA court often make themselves available at all hours to approve emergency authorizations. So that's not something new."

Beyond that, a former Justice Department official has told CBS News that emergency wiretaps can be started and the necessary paperwork can be completed retroactively.

The day after sending his letter to Congress, Gonzales appeared before the Judiciary Committee. Fireworks were expected, but none took place. It appeared that with the announcement that wiretaps would go through the FISA court, Gonzales had preemptively taken the wind out of the sails of Democratic senators who had been chomping at the bit for years to ask the Attorney General the tough questions.

One senior Democrat actually told Gonzales: "I want to commend you."

Instead of facing harsh criticism about the legality of the program, Gonzales faced harsh questions about what took so long to put the surveillance under judicial review. When prodded for specific details of the court's orders allowing the surveillance, he simply said he couldn't answer in public.

In one grand, but unceremonious move, the Bush administration thwarted the critics, saved itself from potentially nasty court battles over the program, and at the same time, ensured surveillance would continue.

So, what took so long? Gonzales made a point of saying that it has taken Justice Department lawyers years to produce the paperwork necessary to maintain the heart of the surveillance program while making it legal and bringing under the court's supervision. The question that still remains, though, is why they didn't say that from the start.