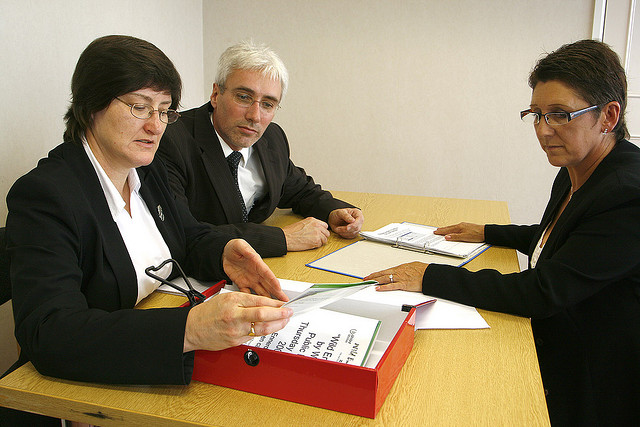 My boss is a mess. I don't even know where to begin. Among other things, her most serious problem is her incompetence. It is troublesome that nobody above her notices her incompetence because she has a competent team working under her. She is up for a promotion, which I and all of the other coworkers in the team do not think she deserves. We are worried that she is presenting the work the team does as her own. What do we do?

I wish I could tell you that the higher ups do see her incompetence and you just don't see how they are handling it, but that's not always the case. I had a friend who was extremely competent at her job and had a boss who took all the credit and routinely badmouthed her. When she finally got put on a performance improvement plan, she'd had enough and found a new job and left.

This, of course, meant that her boss had to do all the work that he had been taking credit for and couldn't do. Within two months, the boss had been fired and the boss' boss was on the phone to my friend begging her to come back and apologizing right and left. Her answer was, ummm, no. Your loss.

And while this was definitely a satisfying solution, it's not easily implemented. Unless there are other compelling reasons to stay at a particular company (location, hours, flexibility, growth opportunities), it's not a bad idea to start looking for a new job. A bad boss is not only potentially damaging to your career (see above), but damaging to your health, mentally and physically.

Now, there is part of me that wants to tell you to hope she gets the promotion because that many mean she's promoted away from you, but that's not fair to whoever gets stuck with her. And it could mean that she is still responsible for your department, only now she has more power. Scary.

So, instead, if you're asked give your honest, unemotional opinion, say things like, "She doesn't have a good grasp on [whatever]." Not, "She's a raging idiot who can't even do [whatever]!" The former is verifiable and while the latter may be true, it will come across as your jealousy not her lack of skill.

But it may just be that she's not a bad boss, she's just bad at doing what you do. Keep in mind that doing is different than managing. You don't necessarily need to be able to do the work in order to manage those that do do the work. Think about it this way -- what CEO could walk onto the production line and fix a problem with the machinery? A good manager hires people who do know how to do the work, and (in all honesty), it sounds like she's done just that.

Additionally, bosses taking credit for their direct reports' work is normal even though it's not nice (and not a best practice). It's understood and no one really thinks the boss did all the work by herself. But, it is frequently the boss who presents the work. She should give thanks and credit to her team, of course, but unless she's openly badmouthing you, people know the team is doing the work, even if she uses the "I" pronoun when she should use "we" or "my team."

Smart bosses will, of course, give credit to their team when things go well and take responsibility when they go badly. Contrary to bad boss opinion, praising your team shows you are smart, not that you are stupid. I want to hire people who have built fabulous teams in the past when I need someone to manage other teams, regardless of whether they can do the work or not.

She may be doing exactly what her bosses want her to do. This may mean that they are bad bosses (they certainly exist at all levels) or again, it may reflect her competence at hiring good people. (This is a very difficult skill, so unless she inherited her team, this may be just the thing senior management is looking for.)

What can you do? Other than working hard (which you're doing), remain positive, network with people outside your department, attend as many meeting with higher ups as you can, be honest when asked your opinion, don't badmouth your boss, and look for a new job.