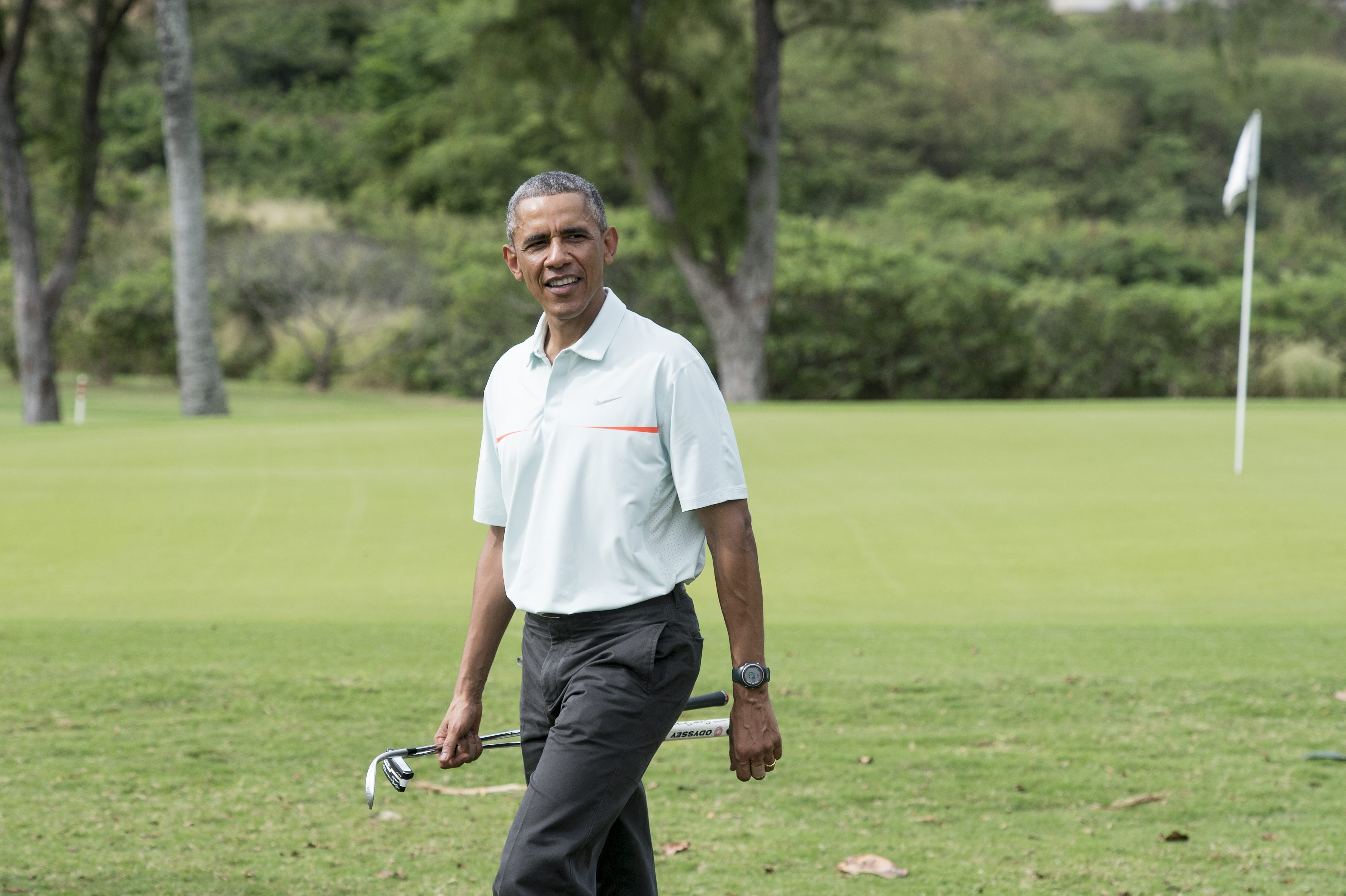 HONOLULU - After nearly a week of vacation in Hawaii, the president's scorecard looks like this: four rounds of golf, three visits to the gym, a trip to the bowling alley and a hike through the wilds of Oahu.

It's a fairly typical Hawaiian presidential getaway, filled with athletic pursuits for a relentlessly competitive commander in chief in search of a worthy adversary.

He's the candidate who made basketball as much a part of his 2008 campaign as hope and change, finding time for pick-up hoops on primary election days. Playing ball was good luck, he said at the time. The White House tennis court became the White House basketball court when the Obamas moved in.

But the president himself admits time has caught up with his 6-foot, 1-inch, 53-year-old body. He's more cautious than he was even as a first-term president, fearing injury and a prolonged recovery. Golf has overtaken basketball as his preferred recreational pursuit and there hasn't been an announced presidential basketball game in more than a year.

"Man, my jump shot is broke," the president said just before the November midterm elections. "I've been working too hard. I've got to get back in the gym."

A White House aide said golf gives the president a taste of competition and athleticism without basketball's injury risks. Above all it provides a sense of freedom for Mr. Obama, who has bemoaned the confines of the office. Aside from the golf course, there's no other open space where he can walk around freely, said the aide, who requested anonymity so he could speak candidly.

Chambliss, who rode in Mr. Obama's cart, said they played Republicans versus Democrats and was quick to add that the Republicans won. "[Mr. Obama] struggled that day," Chambliss said in a phone interview. "He had some good shots and some not-so-good shots. He had a bad duck hook and he couldn't stop it. I could sympathize as someone who's been there before."

Chambliss estimated the president was a 16 handicap. By comparison, Udall and Corker were ranked by Golf Digest magazine as the top two golfing elected officials. Their handicaps hovered around 2 when the rankings were published in 2011.

On the golf course, Chambliss said they talked a bit of business (cybersecurity, foreign policy) but most of the conversation was casual chatter about the round and each other's families. The senator said he appreciated the president's bipartisan outreach and that the shared experience was good for their working relationship.

"It does help soften things," he said.

Chambliss, it should be noted, scored a hole-in-one on one of the par-3s.

"He always reminds me of that when I see him. He says, 'it's my turn to have the next one,'" Chambliss said of Mr. Obama.

Chambliss isn't the only one who has commented on the president's questionable golf talents. In an interview earlier this year, Michael Jordan said the president, was a "hack" on the green.

"I never said he wasn't a great politician, I just said he was a [expletive] golfer," Jordan said.

Mr. Obama responded to the diss in his own interview about a week later, saying, "There is no doubt that Michael is a better golfer than I am. Of course if I was playing twice a day for the last 15 years, then that might not be the case."

Since taking office, President Obama has played 210 rounds of golf, according to CBS News's Mark Knoller. Monday's bowling outing with friends and staff was only the second time he's bowled outside the White House as president. He's also gone fishing once and played tennis twice over the last 6 years.

Current and former White House staffers describe the president as someone who is at the high end of average for a sports fan. He knows how his Chicago Bears fared on Sunday and can talk about some the game's nuances, one former official recalled, but he's not someone who pores over advanced statistical metrics like a fantasy football wonk.

Recently, the president told a radio host that aside from the Super Bowl or the NBA Finals, he rarely watches full games. He gets sports news by watching SportsCenter on ESPN while exercising most mornings.

"I get so much politics I don't want to be inundated with a bunch of chatter about politics during the day," the president said.

During lulls in his schedule, sports is his preferred topic of conversation, aides said, and aboard Air Force One, spades is the card game of choice.

There are ten days left in the president's vacation - plenty of time for more bowling or golf. But it will be hard for this president to top one of his predecessor's records.

Former President Bill Clinton, famous for helping himself to mulligans on the course, played 19 rounds of golf over a three-week vacation in 1995.