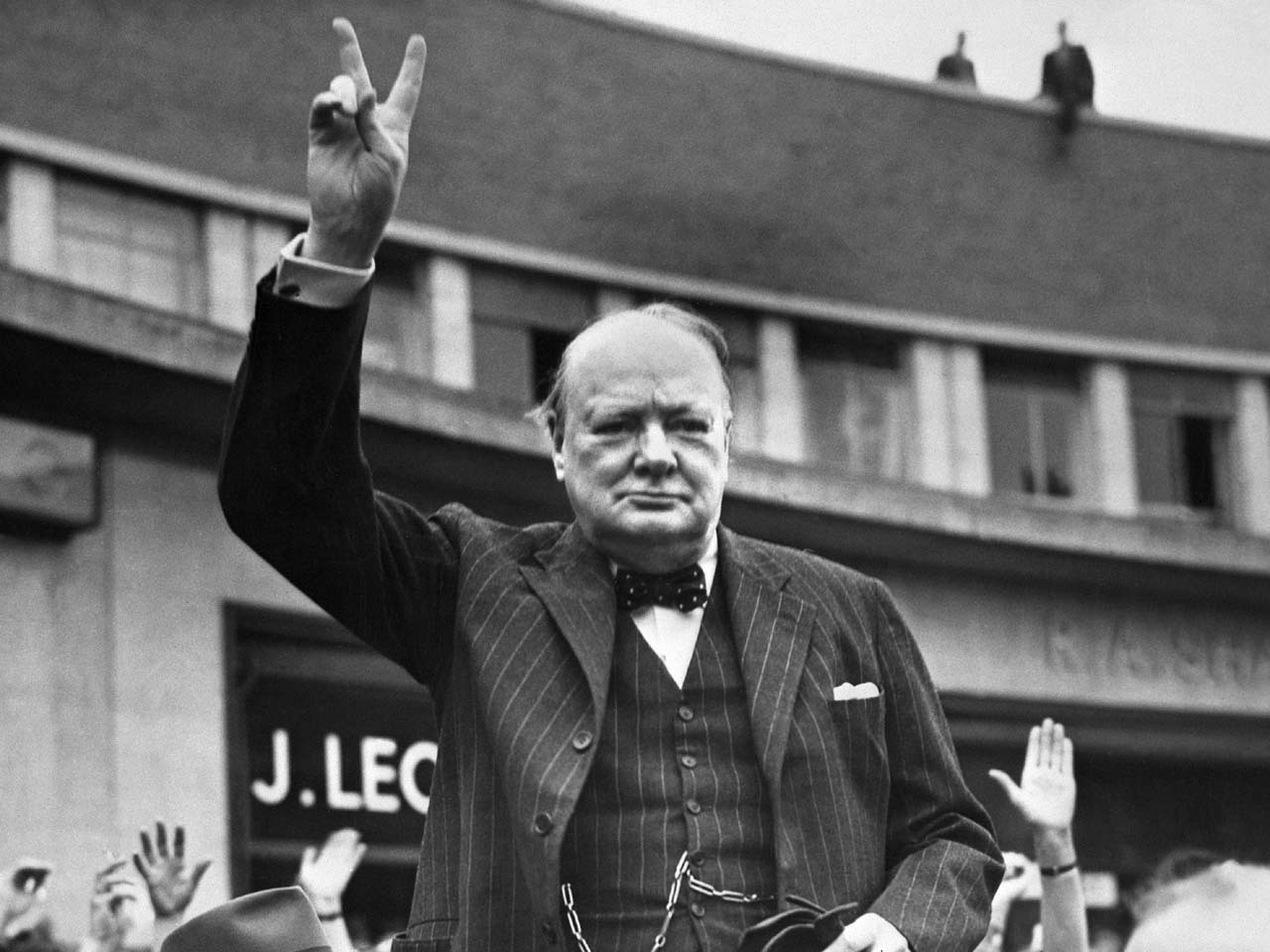 (MoneyWatch) When the study of leadership was young, the most common way to build leadership capacity was to study actual leaders, in the form of biographies. World War II leaders were common subjects, with Winston Churchill being a favorite. The goal was to reengineer what made these individuals great, and to impart these characteristics to the students of leadership. The approach had mixed results, because the findings were often person-specific and based in the uniqueness of a time and place.

If we take a more modern view, something important reveals itself: Actual leaders are a lot more like action heroes (James Bond and Indiana Jones) than the stoic figures who wrote the annals of history. The purpose of this blog post is to show this commonality, and how you can benefit from this insight in your leadership. And yes, you might even become an action hero in the process.

Let's start with a specific story about Churchill. Churchill's hero status started in 1899, when, as a newspaper correspondent, he was captured by Boer soldiers in South Africa and sent to prison. On the night of Dec. 12, when the guards were looking the other way, he climbed a prison wall and walked away, toward the Delagoa Bay Railway. His assets were a flannel suit and four pieces of chocolate.

His big break came when he left the train before sunrise. He reported feeling lost and not knowing what to do. He wrote later, "I prayed long and earnestly for help and guidance." At nightfall, he knocked on a door seemingly picked at random. It was the only house in the district owned by an Englishman, John Howard. Howard hid Churchill in a mineshaft, and then between bales of wool on a train car headed for safer lands. He was accompanied on the trip by Charles Burnham, an Englishman storekeeper who knew about wool, arranged transfer of the cars between engines, and bribed Boers to look the other way. All this happened while the Boers offered a reward for Churchill "dead or alive."

Now, if we end the story there, these might be the lessons: Churchill was bold, he relied on his faith, and his identity as an Englishman helped saved him. Oh, and it helps to be lucky (or favored by God, depending on your worldview).

Let's dig deeper, and show how Churchill had the characteristics of an action hero. It's not hard to imagine this scene in a modern IMAX movie.

The setting for doing something remarkable is a "scene," a term defined as I'm using it by Kenneth Burke. A scene is a time and place where something happens, and where all the aspects of the action hero model come together.

There are three scenes for Churchill's escape. Each has four pieces: His core values, an outcome, assets, and actions. Together, these pieces make up the "micro strategy model" that is a major part of Tribal Leadership.

Let's start with his escape from prison. Churchill's core values, as any readers of his biographies will know, are "never give up" (relentlessness), independence, adventurousness, being imaginative, and straight talk (inspired in part by this). These core values gave reality and urgency to his first outcome (which answers the question, "What do you want?"), which was to leave the prison and get to the Delagoa Bay Railway. His assets, which answers the question, "What do you have?" included his clothes, his chocolate, knowledge of the railway, knowledge of the guard's behaviors, and a bold personality. Before moving on, a leader must ask the question: "Are the assets enough to get to the outcome?" The answer was yes. Churchill's actions were: Get his clothes and chocolate, watch the guards, wait for a moment when they would be distracted for enough time to climb the wall, climb the wall, and head for the railway. Before implementing the strategy, the leader asks: "Will these actions achieve the outcome?" The answer appeared to be yes. He implemented the micro strategy and was now free, but wanted, with a reward on his head.

The second scene was when he was lost and didn't know what to do. His core values were the same. His outcome: Find someone to help him escape from the Boers. His assets were the same as in the escape, but also included desperation. Did he have enough? It's not a certain yes, but it was the best shot he had. His actions included: Look at the houses, do his best to find a person likely to help, pray, and knock on a door. Would his actions take him to his outcome? Again, not certainly, but his imaginative core value, grounded in a love of history, told him that this was a moment of destiny. And it was his best shot. So, a qualified yes. He knocked and obtained help.

The third scene was when Howard helped him escape. Churchill's values were the same as before. Howard was deeply patriotic, so his core values included "loyalty." Churchill had the same assets, now supplemented by Howard's. Not only did Howard know the railways that could get the wanted man to safety, he had access to a mine (to hide Churchill while the pressure was on), financial resources as the manager of the Transvaal Collier, contacts with other Englishmen including Burnham, Burnham's knowledge of transport systems in South Africa, logistics ability, and money to bribe people along the way. Did he have enough? Yes. The actions included: Devise the escape plan, get to the train, meet up with Burnham, hide in between the bales of wool, remain hidden while Burnham ensured proper transport between trains, and rely on him to bribe the Boers. Were these actions enough? Yes. And so Churchill, Howard, and Burnham implemented the plan and the future prime minister returned to the U.K. as a hero.

Readers who want to know where this model comes from, or how Churchill used its thinking to go from escaped prisoner to hero to leader of the opposition as Hitler built his war machine, and then to prime minister and one of the greatest figures in the 20th century, see my personal blog.

The link to action heroes is probably clear. You can imagine Indiana Jones escaping as Churchill did. I recently spent about an hour with a remarkable gathering of young women who want to "to come away with the inspiration and practical knowledge to make a real impact on their world." The group, called "PlushMoney Impact" was organized by my USC Marshall School of Business colleague Neha Kumar.

Each of the young women created a micro strategy for herself, having to do with her career or the impact she wanted to make in the world. They were so nimble with the model that I gave them an "extra credit assignment": Identify a hero or leader from reality or fiction, find a scene, and show how the person's core values, outcome, assets, and actions all came together. Of the many responses, here are three:

You can see all three here.

So, how do you use the lessons of great leaders and action heroes in your situation? There are six steps.

First, learn the model, just as the young women did. You can watch a brief video of it here.

Second, identify a scene -- a specific situation where you need to make something happen that is different from what will probably happen. What's your version of being in prison like Churchill? Or stuck in the tree like Katniss?

Fourth, pause on assets, because that's where the gold is. In every case, an action hero (or leader) relies on assets that may appear ordinary at first. Churchill's personality gave him the fortitude to climb the fence, and his attention on the guard's behavior allowed him to detect a pattern. Katniss Everdeen relied on a friend and something that at first appeared as a problem: A bunch of "tracker jackers" -- genetically engineered super bees that were aggressive and had lethal poison in their stingers. Neal Caffrey relied on his ability to think quickly, a friend, ability to forge art, and being a ladies' man.

Fifth, ask the first test question: Do you have enough assets to get to the outcome? If not, identify more assets, or shrink your outcome.

Sixth, ask the second test question: Will your actions take you to your outcome? If no, go back to our assets and find new ways to use what you have. Add more, until the answer becomes yes.

If you want "extra credit," do what the young women in PlushMoney Impact did: Identify a scene from reality or fiction, when someone was motivated by their core values, used assets in a genius way, to accomplish an outcome that seemed impossible. The benefit to this extra credit step is that you will start to see events all around you as genius utilization of assets, inspired by core values. A good word for that process is "leadership."

Have you used micro strategies? Willing to post about your extra credit step? If so, please make a comment below.