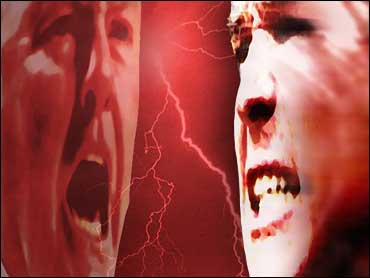 You're sitting at a red light, and it turns green. In the millisecond before you step on the gas, the guy behind you honks his horn and makes an obscene gesture at you. You're with a bunch of people when someone mentions the name, "Hillary," so then people's faces turn red and hate spews out of their mouths. Or, you're with people when someone says, "George Bush," and hate spews out of their mouths. The waitress mistakenly brings you your hamburger with the tomato you didn't want, and you react as if the burger were covered with hemlock. Why are people so mad these days?

I guess I was motivated to write this column because of two things. The first was my seeing a sign in the driveway of a church that read, "This Space For Pastor Only. All Other Cars Will Be Towed!!!!" It was the underline and the four exclamation points that got to me. I understand that the pastor was probably tired of people parking in his space. But as I tried to read between the lines, I didn't see him saying, "Look, I really need to park here, so please park somewhere else." Instead, I saw someone who was angry and fed up, whose attitude was, "You'd better not park in my space or I'll have your *!@!* car towed." And this was from a pastor — about a parking space.

The second thing was a comment someone made in the "blog" section at the bottom of one of my columns. A reader wrote to me, "Just do the country a favor and shoot yourself." Is it just me, or does that seem a tad bit of an overreaction to a column about a proposed Harry Potter amusement park?

Did that reader really think that my opinions have any effect on the condition of our country? And did he really want me to commit suicide because of my views on an amusement park? Probably not. In all likelihood — I hope — he was using hyperbole. Maybe he was in a bad mood before he read the column, or maybe some things I wrote just rubbed him the wrong way. But how angry does someone have to be to write something like that?

And "Mr. Go Shoot Yourself" is not atypical. Surf the Internet for a second or two, and you'll see the venom pouring out from those who verbally attack each other. Listen to talk radio, and you can almost hear the blood pressure rising from those speaking about immigration or gas prices or the ending of the last episode of "The Sopranos." Some angry drivers in California recently became so impatient with the progress of a freeway's repairs, that they actually started aiming their cars at the highway workers.

So, what's going on? Where did all this anger and impatience come from? Why are so many people walking around with such short fuses? Is it the war that everybody wishes were over? Is it still a reaction to 9/11? I wouldn't rule out these possibilities. Daily expressions of anger could be symptoms of the anxious times we live in. Perhaps people are living in a constant state of tension and fear about the world. But we feel frustrated and angry because we don't know what we can do to change things. And these feelings have to go somewhere, so we vent our anger at the old lady in front of us in the grocery store express line who has 11 items instead of 10.

If it's understandable for us to be tense and angry these days, what can we do about it? Well, while we pressure world leaders to make this a safer planet, we can at least take a deep breath now and then to calm down. Of course, when we take those deep breaths, we'll be breathing air that's being polluted by corporations that don't care if they're poisoning us! They only care about making money!! And they're among the most despicable entities in the history of the world!!!! Sorry about that outburst. Sometimes I just get so angry.

Lloyd Garver has written for many television shows, ranging from "Sesame Street" to "Family Ties" to "Frasier." He has also read many books, some of them in hardcover. You wanna make something of it?