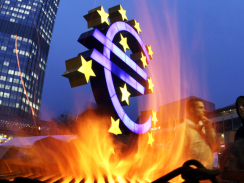 (Money Watch) Just weeks after his nation got the initial payment for its second bailout, Greek Prime Minister Lucas Papademos is warning a third-bailout may be needed. He said more money would be necessary if the country's staggering economy doesn't begin to improve. Papademos also said a return to the country's pre-euro currency, the drachma, would devastate Greece.

"Greece will do everything possible to make a third adjustment program unnecessary," Papademos told Italian business daily Il Sole 24 Ore. "Having said that, markets may not be accessible by Greece even if it has implemented fully all measures agreed on. It cannot be excluded that some financial support may be necessary, but we must try hard to avoid such an outcome."

Greece secured a $173 billion bailout from the International Monetary Fund and the European Union last month after private sector creditors agreed to take part in the biggest debt restructuring in history. When the plan was announced there were already doubts it could actually help the nation. An analysis by the IMF, EU and European Central Bank leaked to the press said Greece was likely to need more support even if it took all recommended budget actions.

Spain's collapsing economy poses risks to U.S
Why Europe's effort to muddle through isn't working
Greek bailout is a farce disguised as a triumph

Although a majority of Greeks reportedly want to remain in the EU, a growing number have been calling for the nation to give up on the euro and return to the drachma, the currency it used to have. Papademos' warning that this would have a severe impact on the economy may carry little weight in the nation. Greece currently has an unemployment rate of more than 20 percent and is in the fifth year of a deep recession.

Papademos' four-month-old coalition government is facing a growing challenge from political groups that oppose the terms of bailout agreements. Speaking in parliament today, the prime minister said the government would need to find almost $16 billion more budget cuts for 2013 and 2014 immediately after the upcoming election, expected on May 6.