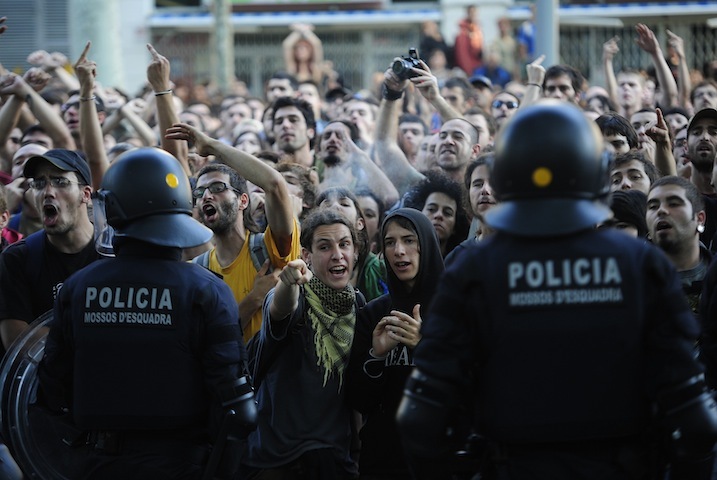 (MoneyWatch) Workers in Spain took to the streets Thursday to protest more budget cuts in a nation that is already on the brink of an economic collapse. Spain is in its second recession in three years and may have to restructure its debt. If this happens it would have a huge impact on the U.S. economy. Spain's economy is almost twice the size of Greece, Ireland and Portugal combined -- too big for the European Union to intervene as it did in Greece.

In research published Wednesday, Citigroup chief economist William Buiter wrote, "Spain looks likely to enter some form of a troika program this year, as a condition for further European Central Bank support for the Spanish sovereign and/or Spanish banks." The report came out on the same day the government announced the nation's gross domestic product declined 0.3 percent in the fourth quarter of last year, less than two years after emerging from the last recession. Spain's unemployment rate is close to 23 percent, the highest of any Euro nation.

Thursday's general strike comes as Prime Minister Mariano Rajoy gets set to unveil what he says will be a "very austere" 2012 budget. The budget, expected to be announced Friday, is forecast to cut around $40 billion and comes after many previous rounds of cuts and tax hikes. Rajoy is under tremendous pressure from investors and European peers to rein in the deficit, which was 8.5 percent of GDP last year.

Rajoy, elected last November, has said he will not hit the 4.4 percent deficit target that the previous government had promised the EU. He is aiming for a 5.8 percent target. Even this seems very optimistic in light of current spending. Spain ran a deficit of 1.94 percent of GDP in January and February. If that pace continues the deficit be close to 12 percent by the end of this year.

Spain is still reeling from the collapse of its real estate market, which has left many banks insolvent.

On Monday, CaixaBank, the nation's largest financial institution, took over the much smaller Banca Civica. As The Wall Street Journal reported, at the end of last year Civica had a book value of $3.7 billion. "CaixaBank is writing this down to zero. The $1.3 billion purchase price represents only Banca Civica's share of an estimated $2.3 billion of synergies. That seems generous given that the deal will knock $3.7 billion off CaixaBank's capital."

This is especially worrisome because Banca Civica is supposed to be in better condition than most other savings banks being taken over. Last year it took $2.6 billion in government provisions to cover bad loans. Perhaps an even bigger cause for concern is that CaixaBank's write down was $2.6 billion more than had been required under the government overhaul plan. Civica is far from an outlier when it comes to Spanish banks which, as a whole, have a loan-to-deposit ratio of 145 percent.

Although U.S. banks have been shedding more European debt for more than a year, if Spain defaults it will bankrupt so many companies -- and possibly governments -- that these moves will not be enough to shelter the American economy.