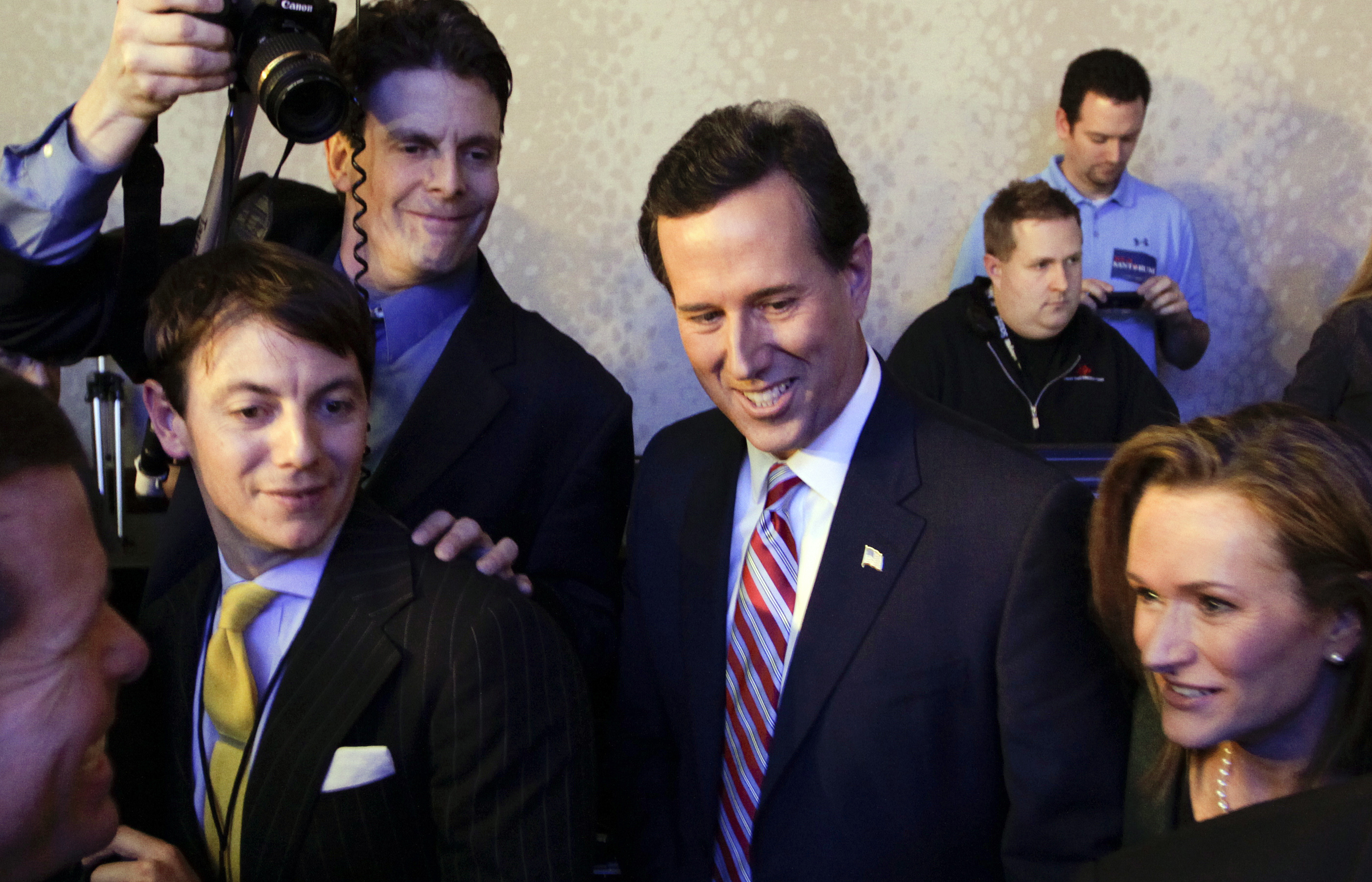 In Iowa, as evangelicals go, so goes the Republican presidential caucus. Regularly comprising more than half of caucus goers, they have the capability of ensuring a victory for any of the competing candidates. In 2008, they strongly supported Mike Huckabee over Mitt Romney 46 to 19 percent, propelling him to an unexpected victory. Tuesday night, a smaller but still sizable proportion of evangelicals - 32 percent - united behind Rick Santorum, pushing him to the forefront of the contest.

The journey, though, was far different for Santorum than Huckabee. Whereas Huckabee -- an ordained Southern Baptist minister -- stood out among a field of fiscal conservatives, Santorum found himself competing against several other candidates with strong social conservative credentials: Rick Perry, Newt Gingrich, and Michelle Bachman.

Evangelicals wavered throughout the campaign, pushing each of them to the top of the pre-election points at one point or another. Three factors, though, eventually enabled Santorum to emerge from the pack and unite a substantial number of evangelical voters behind him:

Many commentators did not see distinctions between the candidates, but evangelical caucus goers sure did. Of the 30 percent of evangelicals who cited being a true conservative as the most important candidate quality in their vote, 44 percent supported Santorum. Perry, Gingrich, and Bachman only received 26 percent support from evangelicals combined.

On the important question of abortion, 19 percent of evangelicals cited it as the most important issue in their vote. Of those that did, a whopping 60 percent backed Santorum, compared to only 12 percent for Perry, 9 percent for Gingrich, and 8 percent for Bachmann.

Why the race was so close

Time on the Ground

Santorum spent more time campaigning in Iowa than any other candidate. According to the Des Moines Register, Santorum spent 104 total days in Iowa, making more than 300 campaign stops in all 99 counties in the state. By comparison, Michele Bachman spent 82 days, Newt Gingrich spent 63 days, and Rick Perry spent 35 days in Iowa.

Santorum's face time was reflected in his voters' support. Of all the candidates, a greater proportion of his voters - 40 percent - cited strong moral character as the most important candidate quality in deciding for whom to vote. Such assessments do not come from 30 second campaign commercials, but from endless exchanges with voters across the state.

Much was made of the fact that several important evangelical organizations, such as the Family Leader, the Iowa Faith and Freedom Coalition, and Iowa Right to Life, failed to endorse any of the candidates. However, a number of key evangelical leaders - Cary Gordin , the president of Peace Makers Institute and Bob Vander Plaats, the president of the Family - did throw their support behind Santorum in the closing days of the campaign, seemingly steering many evangelicals toward him.

More than half - 52 percent - of evangelicals made their decision about who to support in the last few days, after a number of these endorsements had recently been announced. Among these late deciders, Santorum was the overwhelming choice. He received the support of 39 percent of evangelicals who decided in the last few days and 45 percent of those deciding the day of the caucus.

If Santorum can unite evangelicals nationwide as he did in Iowa, he is well positioned to potentially win the nomination. A number of key contests coming up in next two months have large numbers of evangelical voters.

Even if evangelicals do coalesce around Santorum, there is, of course, no guarantee that they will dictate the outcome of the contest. Mike Huckabee lost the 2008 South Carolina Republican Primary 33 percent to 30 percent, despite receiving 43 percent of the evangelical vote. But, if they do come together, the Republican nomination will surely be more closely contested than it has years past.

Poll results discussed in this article are based on a National Election Pool entrance poll conducted by Edison Media Research. Interviews were conducted with 1737 caucus attendees as they entered caucus sites around Iowa. The margin of error for the poll is +/-2 percentage points.