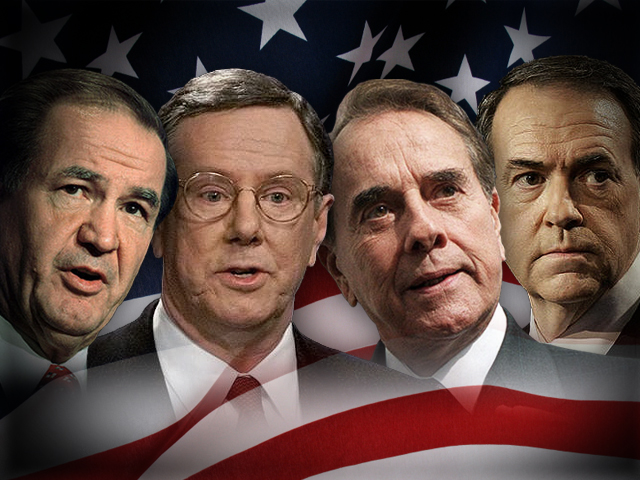 For a few months every four years the state of Iowa becomes a focal point for the nation as it holds its first-in-the-nation presidential nominating contest - the Iowa caucuses. Journalists and pundits analyze the presidential candidates' every move in the state as well as the caucus-goers' predicted preferences in an attempt to discern who will win.

But to what end?

While the Republican horserace has been very exciting, if past is prologue Iowa's caucus night winner will be just that, the winner of the Iowa caucuses, but not the nominee of the GOP.

Iowa has a bad track record when it comes to influencing who will be the Republican Party's presidential nominee. When the races are contested, the winner of the GOP Iowa caucuses usually does not win the second nominating contest, the New Hampshire primaries, and more often than not loses the overall nomination as well. In the five contested races over the past quarter century (1980, 1988, 1996, 2000 and 2008), the eventual party nominee won the Iowa caucuses twice: Kansas Senator Bob Dole in 1996 and Texas Governor George W. Bush in 2000. In the three other years the winners were Vice President George H.W. Bush in 1980 (eight years prior to his eventual nomination in 1988), Bob Dole in 1988 (again eight years in advance of his success) and former Arkansas Governor Mike Huckabee in 2008.

The Iowa caucuses are actually as accurate at predicting the GOP nominee eight years later as they are in the current year. By that measure, Huckabee should be preparing himself for his inevitable nomination in 2016.

What is it that makes Iowa so distinct, to the point of potential irrelevance, in the nomination of GOP presidential candidates?

There are a multitude of factors at work. First, the presidential nomination is a race that is, by definition, in its very early stages when it hits Iowa in January -- making things fluid and unstable. A second factor is the nature of the caucuses themselves. While they have traditionally been a celebrated event in Iowa, their extremely low turnout (especially on the GOP side) gives disproportionate voice to a small and therefore unrepresentative portion of the electorate. A final, resulting factor is the nature of the Iowa caucus constituency - a conservative group unlike many others, including those in other early states.

This year, as the nominating contest gets set to land in Iowa, volatility reigns. Pre-caucus polls show three lead changes in the past month, with former Massachusetts Governor Mitt Romney, Texas Congressman Ron Paul and former Speaker of the House Newt Gingrich each holding the top spot at one point. The picture last week showed a tight race between Romney and Paul. But things are still in flux. The most recent surveys show Rick Santorum making real headway at this very late date, charging into the second or third place spot. His apparent momentum is keeping things fluid down to the wire.

The reality of the Iowa caucuses also works against their influencing the nomination contest overall. Iowans have traditionally claimed first-in-the-nation legitimacy through the caucuses' grassroots nature. But the numbers tell a very different story. Rather than draw large numbers of participants wanting to have a say, the caucuses tend to draw very small numbers. In 2008, heralded as a banner year for turnout only 5.4 percent of eligible Iowans turned up at a GOP caucus site.

By comparison, in the first primary state - New Hampshire - 23.4 percent of the state's voters turned out for the Republican primary. And in South Carolina, the first southern contest, 14 percent went to vote. It should be noted that Iowa has a more restrictive participation system in which only registered Republicans can take part, which likely contributes to the lower turnout as well as the less representative nature of the actual electorate.

This unique character of Iowa's caucus-goers has led to some real surprises over time -- surprises that contribute to the state's reputation as an electoral maverick. The more famous examples are the third place showing of eventual nominee Vice President George H. W. Bush in 1988 and the scare put into Kansas Senator Bob Dole in 1996 by a surprisingly strong showing from Patrick Buchanan. In both of these cases the results were fueled, at least in part, by Iowa's conservative caucus-goers. Pat Robertson, the surprise second-place finisher in 1988, received 35 percent of the conservative vote. In 1996, Buchanan edged out Dole among conservatives and beat him handily among members of the religious right.

These standout instances fuel discussion of Iowa as a negligible contest in the grand scheme of nominating a presidential candidate. Most of these strong Iowa candidates - Dole and Robertson in 1988, and Huckabee in 2008 - went on to lose not only in the New Hampshire primary but in the nomination fight overall. Buchanan actually won New Hampshire in 1996, but not the nomination. The two examples of those who won both Iowa and the nomination - Dole in 1996 and Bush in 2000 - fade in comparison (although even in 2000 an unprecedented strong showing came from Steve Forbes and shocked poll-watchers) .

What all of these factors mean for Iowa in 2012 is unclear. Poor past attendance at the caucuses tells us that only the most enthusiastic people show up to participate. This has worked largely to the benefit of religious and conservative candidates in the past. If that is again the case, this could boost Santorum from anonymity. Recent polls by both NBC/Marist and CNN/TIME/ORC have Santorum currently beating all other candidates among evangelicals and white evangelicals respectively.

At the same time, Ron Paul supporters are known for their enthusiasm, and this could literally change the face of the typical Iowa caucus attendee. Paul supporters tend to be much younger and more moderate than typical participants (according to his performance in 2008 Iowa entrance polls). If Paul can get his supporters to the caucuses he could do even better than currently predicted. Caucus tradition is not on Paul's side, but Paul regularly defies tradition.

And there is always Mitt Romney. His steady poll numbers in Iowa, low-twenties, demonstrate surprising stability in the otherwise choppy waters of the election. For him, the more strong candidates, the merrier. He can count on his steady support, what he needs is for others to split the non-Romney vote into enough pieces to make his seemingly solid 20 percent enough to win.

What this all means for Iowa in the bigger picture could be further inconsequence in nomination fights, or at least that appears to be the fear among the state's own political elite. They are publicly afraid of another caucus winner who turns out to be a nomination loser - in this case Ron Paul.

Governor Terry Branstad has been quoted downplaying the significance of a first place Iowa finish, saying that it is really the top three finishers that count. Others, including the Speaker of the Iowa House Kraig Paulsen, are backpedaling from a potential Paul win as well, arguing that if he wins it will be because non-Republicans swarmed the caucuses (by changing their party registration on the spot, which the rules allow) to support him, in Paulsen's words "perverting the process."

Again, to what end Iowa?