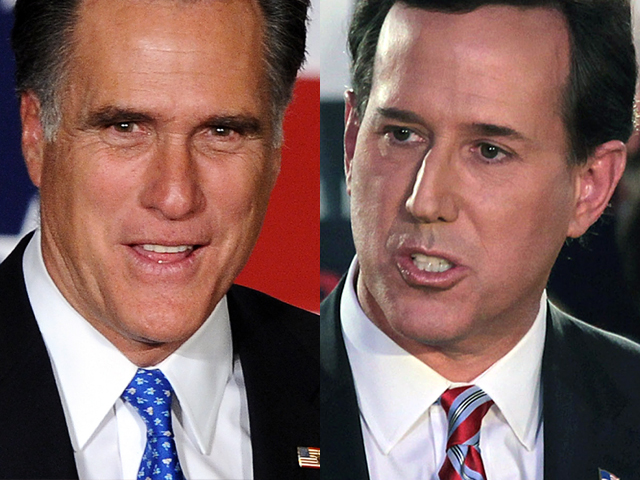 Santorum pulled off a stunning come-from-behind performance in Tuesday's Iowa caucuses, garnering just eight fewer votes than a much better funded and better organized Romney in the closest Iowa contest since the modern caucuses were formed in 1976.

It's a tie, so Santorum wins

"Game on," Santorum told supporters gathered in Johnston, Iowa in what amounted to a victory speech before the results were announced.

The devout Catholic father of seven vowed to take his social conservative message to New Hampshire, which holds the first binding vote on January 10. The Iowa caucuses are non-binding.

"With your help and God's grace, we will have another fun night a week from now," Santorum said after offering congratulations to Romney, who now appears headed toward the nomination. Romney is widely expected to win in New Hampshire, where he owns a vacation home.

If Romney wins in the Granite state, he would be the first non-incumbent Republican to win both Iowa and New Hampshire since their 1976 establishment as critical early states in the nominating process.

Ron Paul finished in third place with 21 percent support. Just weeks ago, Santorum was at the bottom of opinion polls.

Romney offered his congratulations to Santorum, while focusing mostly on President Obama and the general election in his remarks, also made before the final tally was announced.

After finishing in a disappointing fifth place with 10 percent of the vote, Rick Perry told his supporters Tuesday night in Iowa he would return to his home state of Texas to "determine whether there is a path forward for me in this race."

Santorum's strong finish, pulled off on a shoe-string budget, validated the more than 100 days he spent engaged in retail campaigning across the state of Iowa. It also proved that conservative voters are still wary of Romney -- whose resources on the campaign trail far surpassed Santorum's -- in spite of perceptions that he would be the most viable Republican presidential candidate.

Santorum thanked Iowans for "standing up and being bold and leading."

He added, "What wins in American are bold ideas, sharp contrasts and a plan that includes everyone... A plan that says we will work together to get America to work."

In his own remarks Tuesday night, Romney focused on targeting Mr. Obama and promised, "I will go to work to get America back to work."

Technically speaking, the caucuses are largely symbolic -- the results represent the viewpoints of just a fraction of the American population. Iowa will send just 25 dedicated delegates (awarded to the candidates proportionally) to the Republican National Convention in Florida, where a candidate will need the support of at least 1,143 to win the presidential nomination. On top of all that, the Iowa delegates aren't officially chosen on caucus night -- they're selected at a state convention in June. (There are also three undedicated delegates who will also attend the June convention.)

That said, the caucuses could alter the dynamics of the race. Perry could be the first casualty of the nominating process, after his poor finish, and Michele Bachmann may be reassessing her campaign as well. Their exit from the race could consolidate more support behind Santorum, or it could benefit Newt Gingrich -- in either case, Romney will have to work harder to prove he can get past Republican voters' suspicions that he is too moderate.

The next nominating contest will take place in New Hampshire, where Romney holds a commanding lead. The latest Suffolk University two-day tracking poll out of New Hampshire showed Romney with 43 percent support with Paul coming in second with 16 percent.

In remarks late Tuesday night, Paul argued that he won "one of three tickets out" of Iowa -- "and one of two that can actually run a national campaign and raise the money." Paul has attracted an ardent base of supporters with his libertarian views and has the organization to carry his campaign beyond Iowa.

While he couldn't pull off a victory in Iowa, Paul said his campaign has been successful in "reintroducing some ideas that Republicans have needed for a long time, and that is the conviction that freedom is popular."

Bachmann finished in sixth place with 5 percent support, finishing only ahead of Jon Huntsman, who chose not to campaign in Iowa. The congresswoman did not drop out immediately after the results of the caucuses became clear, but her campaign gave mixed signals as to whether she would stay in the race much longer.

Gingrich, who came in fourth with 13 percent support, blasted Romney on Tuesday night for running a negative campaign against the former speaker. Gingrich never mentioned Romney by name, but he thanked his supporters for enduring "the avalanche of negative ads."

Gingrich commended Santorum for running "a great, positive campaign." He added, "I wish I could say that for all the candidates." Gingrich earlier in the day called Romney a liar on CBS' "The Early Show."