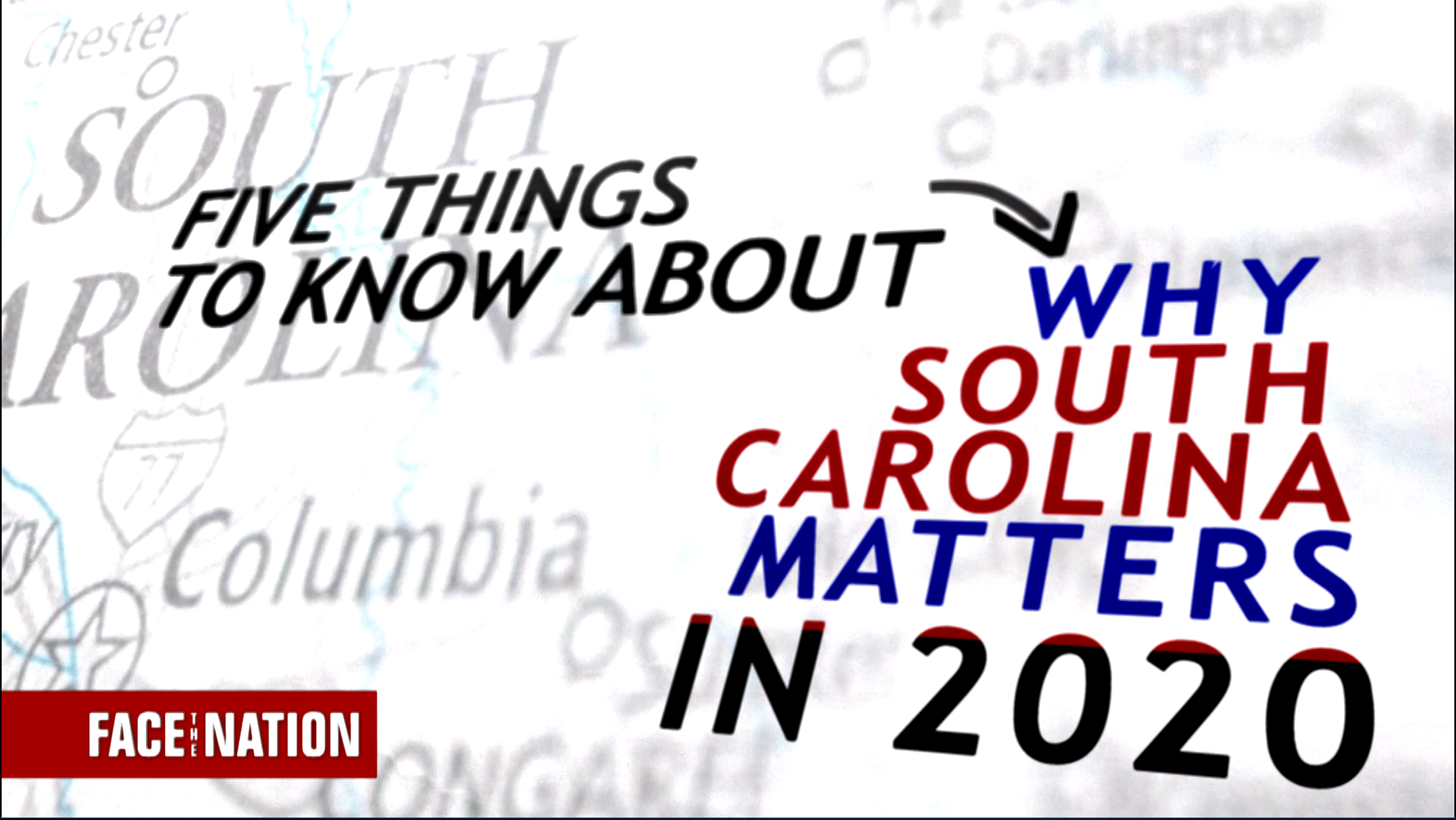 This weekend, we'll be heading to Columbia, South Carolina where 22 of the 24 democratic presidential candidates are campaigning. I'm Face the Nation Moderator Margaret Brennan with Five things to know about why South Carolina matters in 2020.

Number 1: The winner of the South Carolina primary will have big momentum going into Super Tuesday.

The timing of this primary is crucial. It comes after the first three contests in Iowa, New Hampshire and Nevada, and just three days before over a dozen contests on Super Tuesday. The winner in South Carolina have the wind at their back, along with the media momentum that comes with an early primary win as they head into Super Tuesday voting.

Number 2: South Carolina is the first primary where a significant number of registered Democrats-61% who voted in 2016 --are African American. According to our CBS News battleground tracker, 49% percent of African Americans who say they'll likely vote in the South Carolina primary pick Joe Biden as their first choice among candidates. Senator Bernie Sanders has the likely support of 19% and 8% support Senator Kamala Harris, one of three African Americans in the race.

Number 3: After the primary, you won't see much of  democrats in South Carolina -- it's considered a red state and has gone Republican in every general election since 1980.  In the 2016 general election, 55% of the vote went to President Trump, compared to 41% for Hillary Clinton.

Number 4:  Why are democrats going to South Carolina this weekend? It has a lot to do with Jim Clyburn's World Famous Fish Fry on Friday night, followed by the state democratic convention the next day. South Carolina Representative Clyburn is the third-ranking Democrat in the House and a powerful politician in the state--support from Clyburn would go a long way in the state contest.

Number 5: The first fish fry was held 27 years ago as a "thank you" to campaign volunteers after Clyburn won his first congressional election. Clyburn staffers fried the fish and it used to be held in a parking garage. This year at least 1,600 will attend -- and they'll eat well. Clyburn has ordered more than 4,400 pounds of fish and 6,400 slices of bread to feed hungry candidates -- and supporters -- at Friday's fish fry.

South Carolina, an important stop on the road to 2020.

We'll have interviews with two of the candidates campaigning in South Carolina this weekend, including Vermont Senator Bernie Sanders.

Full transcript of "Face the Nation" on Aug. 14, 2022
Thanks for reading CBS NEWS.
Create your free account or log in
for more features.
View CBS News In
CBS News App Open
Chrome Safari Continue
Be the first to know
Get browser notifications for breaking news, live events, and exclusive reporting.