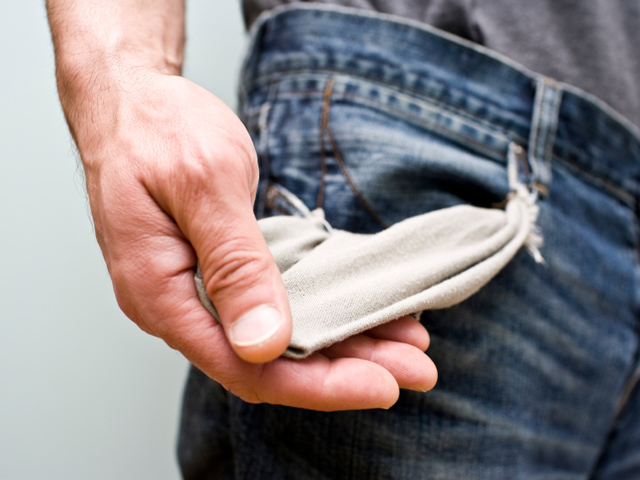 (MoneyWatch) Did you hear about the professional athlete who just declared bankruptcy? Of course you have. Because when it comes to professional athletes and money, we tend to only hear about how large their new contract is worth or how much they just lost -- and unfortunately there is no shortage of examples of the latter. A Sports Illustrated article reports the grim statistics -- 78 percent of NFL players face bankruptcy or serious financial stress within just two years of leaving the game and 60 percent of NBA players face the same dire results in five years.

While the statistics are not in dispute, the reasons why so many athletes face financial problems are. Often it boils down to the "dumb jock" stereotype -- these guys are superstars on the field but completely clueless off. Sure, that may explain some of the athletes that have gone broke, but this is not a valid or useful explanation of why so many professional athletes end up broke. In fact, NFL players score above average on intelligence measures. Many professional athletes suffer financial problems -- not because they aren't smart -- but for a number of more nuanced reasons.

In my work managing the finances of sudden wealth recipients and advising professional athletes, the best way to help is to overcome the common barriers that prevent windfall recipients from doing the right thing. Here are a few issues, any one of which can wreak havoc on one's finances, that are common to the professional athlete:

Trust issues. Think Goldilocks. Too much or too little can be a problem. For the athlete that doesn't trust anyone, he won't be open to good tax, legal, and financial advice that could protect his wealth and ensure a lifetime of financial stability. On the other hand, more than a few professional athletes have been duped, taken advantage of, or downright defrauded because they blindly trusted a smooth talking "suit." A newly announced financial helpline by the NFL Player's Association aims to address this very issue. Liz Davidson, CEO of Financial Finesse and the company supporting the helpline says, "This program gives players a strong base to build upon, and that with the continued growth of their financial education initiatives, players will continue to progress financially."

Wired differently. It's pretty easy to spot a professional athlete in a lineup. Physically they are quite different from you and me. But psychologically they may be different as well. Research found significant differences between athletes and non-athletes across personality characteristics such as inhibition, emotionality, and aggressiveness. Good characteristics on the field, but not necessarily optimum for making financial decisions.

Today focus. Research published in the Journal of Judgment and Decision Making shows professional athletes are more present focused rather than future focused as compared to non-athletes. In other words, there is much greater emphasis placed on today than there is on tomorrow. This may help support the athletes' winner-take-all mindset needed to excel, but can impede any attempt at saving and investing for their future.

Familial pressure. "If you haven't experienced it yourself, there is no way to describe it" is how one client expressed the rush of a windfall and the ensuing pressure from friends and family to "spread the love." The star we see on the field is often the proverbial tip of the iceberg. Who we don't see is the family or friends that may have encouraged and even supported the athlete. For some athletes, they feel a sense of duty to buy houses and cars or invest in the business ideas of those who helped them get to where they are. They may do this to the extreme in order to assuage the idea that money has changed them. "Look at me," they'll say. "Money hasn't changed me and I'll prove it."

Ego bleed. For professional athletes it's the Lake Wobegon Effect -- the tendency for everyone to think they are above average -- but on steroids! Because in this case, these athletes are truly the very best in the world at what they do. The problem is when this over confidence bleeds into their finances -- thinking they don't need advice and that they have some special insight or talent in areas beyond their athletic expertise.

Need excitement. Investing and finance is fast-paced and exciting with high emotions and drama ... in the movies. In the real world, financial planning is slow and methodical. The glitz and glamour we think of on Wall Street doesn't translate into a good, long-term financial strategy. But some athletes want and expect the drama. A steady return in the stock market just isn't exciting enough, so some seek high-risk, winner-take-all (sound familiar?) investments that often leave them high on adrenaline but low on funds.

Two worlds. As foreign as it would feel for you to enter their world, it is often just as alien for the athlete to discuss asset allocations, family limited partnerships, and the alternative minimum tax. According to former professional baseball player Bobby Grich, "Players are not trained in wealth management and that world can be totally intimidating as I know from firsthand experience."

Athletes suffer financially for many reasons, but the dumb jock explanation is not one of them. Professional athletes are intelligent and talented in ways the rest of us cannot fathom. Davidson agrees, noting that "The game requires a high level of discipline, focus and intelligence -- all traits that can be parlayed into smart money management." Sometimes all it takes is recognizing and overcoming some of these barriers, entering their world, and providing a little guidance.