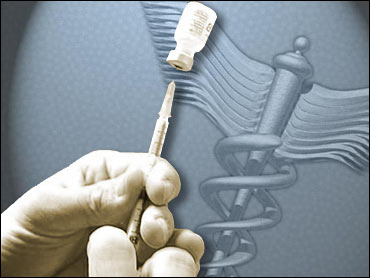 The U.S. government approved the first whooping cough booster shot meant just for adolescents on Tuesday, a vaccine that doctors hope will battle a disease that's making a dangerous comeback.

GlaxoSmithKline's Boostrix adds whooping cough protection to a booster shot against two other diseases — tetanus and diphtheria — that children already are supposed to get sometime between ages 10 and 18.

Whooping cough, also called pertussis, is a bacterial infection that causes a cough so violent in can break a rib. Initial coldlike symptoms lead to fits of 16 to 20 coughs in a row that leave patients gasping for air — the distinctive "whoop" that gave the disease its name.

Babies and young children have been vaccinated against whooping cough, also called pertussis, since the 1940s, causing the disease to plummet in industrialized nations.

But it's on the rise again, thanks largely to outbreaks in teenagers and adults that illustrate the vaccine's protection wears off, often by adolescence. The Centers for Disease Control and Prevention received 18,957 reports of whooping cough last year, up from 11,647 in 2003 and just 1,707 in 1980 — and about a third are among adolescents.

The real threat is not to the older patients: Whooping cough can kill newborns before they're old enough to get their first doses of pertussis vaccine, so the more older children and adults who get this disease, the higher the risk to those vulnerable babies.

Indeed, since 1990, pertussis has risen 72 percent among babies younger than 4 months, the age when vaccine protection begins to kick in.

Glaxo's Boostrix uses the same pertussis protection as is in the company's infant vaccine, but at a lower booster dose, the Food and Drug Administration said. Studies showed adolescents given the booster shot had immune system responses that indicate adequate protection, but no one yet knows how long the renewed immunity will last, the agency said.

The most common side effects were pain, redness and swelling at the injection site; headaches, fever and fatigue for a short period after the shot also were reported.