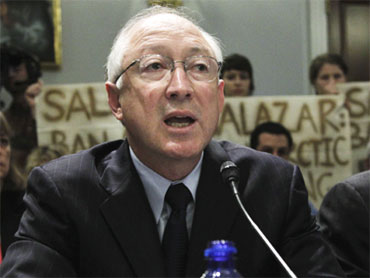 Interior Secretary Ken Salazar will issue a new order within the next few days imposing a moratorium on deepwater oil drilling that he says will eliminate any doubt it is needed and appropriate.

Salazar's statement came hours after the White House vowed to immediately appeal a federal judge's ruling to strike down the Obama administration's six-month ban on deepwater drilling in the Gulf of Mexico.

Judge Martin Feldman, who has significant investments in the oil industry, ruled the moratorium rash and heavy-handed Tuesday, saying the government simply assumed that because one rig exploded, the others pose an imminent danger, too.

The Interior Department had imposed the moratorium last month in the wake of the BP disaster, halting approval of any new permits for deepwater projects and suspending drilling on 33 exploratory wells.

White House spokesman Robert Gibbs said President Obama believes that until investigations can determine why the spill happened, continued deepwater drilling exposes workers and the environment to "a danger that the president does not believe we can afford."

Several companies that ferry people and supplies and provide other services to offshore rigs argued that the moratorium was arbitrarily imposed after the April 20 explosion that killed 11 workers and blew out a well 5,000 feet underwater. It has spewed anywhere from 67 million to 127 million gallons of oil.

U.S. District Judge Martin Feldman, who was appointed by President Ronald Reagan and has owned stock in a number of petroleum-related companies, sided with the plaintiffs.

"If some drilling equipment parts are flawed, is it rational to say all are?" he asked. "Are all airplanes a danger because one was? All oil tankers like Exxon Valdez? All trains? All mines? That sort of thinking seems heavy-handed, and rather overbearing."

He also warned that the shutdown would have an "immeasurable effect" on the industry, the local economy and the U.S. energy supply.

Feldman's ruling was welcomed by the oil and gas industry and decried by environmentalists.

CBS News correspondent Mark Strassmann spoke Tuesday to Hornbeck, who sued the Obama Administration to get drilling rights back. He's won - for now.

"I think everyone will be cautious to see how quickly we can get back to work," said Hornbeck, CEO of Hornbeck Offshore.

But Josh Reichert, managing director of the Pew Environment Group, said the ruling should be rescinded if the judge still has investments in companies that could benefit. "If Judge Feldman has any investments in oil and gas operators in the Gulf, it represents a flagrant conflict of interest," Reichert said.

Feldman's ruling prohibits federal officials from enforcing the moratorium until a trial is held. At least two major oil companies, Shell and Marathon, said they would wait to see how the appeals play out before resuming drilling.

In his ruling, the judge called the spill "an unprecedented, sad, ugly and inhuman disaster," but said Salazar's rationale for the moratorium "does not seem to be fact-specific and refuses to take into measure the safety records of those others in the Gulf." Feldman said he was "unable to divine or fathom a relationship between the findings and the immense scope of the moratorium."

The judge said the blanket moratorium "seems to assume that because one rig failed and although no one yet fully knows why, all companies and rigs drilling new wells over 500 feet also universally present an imminent danger."

The lawsuit was filed by Hornbeck Offshore Services of Covington, La. CEO Todd Hornbeck said after the ruling that he is looking forward to getting back to work. "It's the right thing for not only the industry but the country," he said.

Earlier in the day, executives at a major oil conference in London warned that the moratorium would cripple world energy supplies. Steven Newman, president and CEO of Transocean, called it unnecessary and an overreaction.

"There are things the administration could implement today that would allow the industry to go back to work tomorrow without an arbitrary six-month time limit," Newman said.

BP CEO Tony Hayward skipped the event after coming under fire for attending a yacht race in England on Saturday rather than dealing with the spill.

BP stock dropped 81 cents, or 2.7 percent, to $29.52, near a 14-year-old low for the company in U.S. trading. The stocks of other companies associated with the spill remained low despite Feldman's ruling.

The drilling moratorium was declared May 6 and originally was to last only through the month. Obama announced May 27 that he was extending it for six months.

"This is another bad decision in a disaster riddled with bad decisions by the oil industry," said Markey, who was at the forefront of the effort to force BP to make underwater video of the spill public. "The only thing worse than one oil spill disaster in the Gulf of Mexico would be two oil spill disasters."

In Louisiana, Gov. Bobby Jindal and corporate leaders had complained that the moratorium would cost the region thousands of lucrative jobs, most paying more than $50,000 a year.

Feldman agreed, writing: "An invalid agency decision to suspend drilling of wells in depths over 500 feet simply cannot justify the immeasurable effect on the plaintiffs, the local economy, the Gulf region and the critical present-day aspect of the availability of domestic energy in this country."

He said Gulf drilling accounts for 31 percent of total domestic oil production and 11 percent of domestic natural gas production, and an estimated 150,000 jobs are directly related to offshore operations.

Tim Kerner, mayor of the fishing town of Lafitte, La., cheered the ruling. "I love it. I think it's great for the jobs here and the people who depend on them," he said.

The American Petroleum Institute, one of the industry's main lobbying groups, also welcomed the decision: "With this ruling, our industry and its people can get back to work to provide Americans with the energy they need, and do it safely and without harming the environment."

In its response to the lawsuit, the Interior Department had argued the moratorium was necessary while the effort to stop the leak and clean the Gulf continues and new safety standards are developed. "A second deepwater blowout could overwhelm the efforts to respond to the current disaster," the department said.

The government also challenged contentions that the moratorium would cause long-term economic harm. There are still 3,600 oil and natural gas production platforms in the Gulf.

As Feldman was issuing his ruling, the people in charge of a $20 billion fund to compensate those whose livelihoods have been ruined by the spill were on the coast Tuesday to talk with officials about the claims process.

Kenneth Feinberg, tapped by the White House to run the fund, has pledged to speed payments to fishermen, business owners and others. He was to meet with Alabama Gov. Bob Riley.

BP claims director Darryl Willis visited a claims center in a rundown strip mall in Bayou La Batre, Ala., and said the company has already cut 37,000 checks for $118 million. Claims totaling about $600 million have been filed so far.

"Anyone who feels like they have been damaged or hurt or harmed has every right to file a claim," Willis said. "These are complicated in some cases, and in some cases they're straightforward. But every person should file their claim, and they will be looked at fairly."