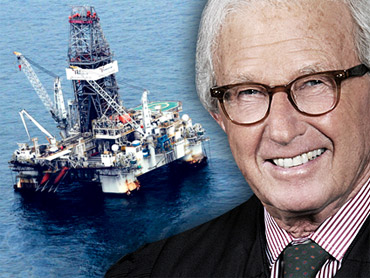 The Louisiana judge who struck down the Obama administration's six-month ban on deepwater oil drilling in the Gulf of Mexico has reported extensive investments in the oil and gas industry, according to financial disclosure reports. He's also a new member of a secret national security court.

He's one of many federal judges across the Gulf Coast region with money in oil and gas. Several have disqualified themselves from hearing spill-related lawsuits and others have sold their holdings so they can preside over some of the 200-plus cases.

Feldman did not respond to requests for comment and to clarify whether he still holds some or all of these investments.

Feldman overturned the ban Tuesday, saying the government simply assumed that because one rig exploded, the others pose an imminent danger, too.

The White House promised an immediate appeal. The Interior Department had imposed the moratorium last month in the wake of the BP disaster, halting approval of any new permits for deepwater projects and suspending drilling on 33 exploratory wells.

Interior Secretary Ken Salazar said in a statement late Tuesday that within the next few days he would issue a new order imposing a moratorium that eliminates any doubt it is needed and appropriate.

Several companies that ferry people and supplies and provide other services to offshore rigs argued that the moratorium was arbitrarily imposed after the April 20 explosion that killed 11 workers and blew out a well 5,000 feet underwater. It has spewed anywhere from 67 million to 127 million gallons of oil.

Although Feldman ruled in favor of oil interests Tuesday, one expert said his reasoning appeared sound because the six-month ban was overly broad.

"There's been some concern that he is biased toward the industry, but I don't see it in this opinion," said Tim Howard, a Northeastern University law professor who also represents businesses and people claiming economic losses in several spill-related lawsuits. "They overreacted and just shut an industry down, rather than focusing on where the problems are."

That was what Feldman essentially said in his ruling, writing that the blanket moratorium "seems to assume that because one rig failed and although no one yet fully knows why, all companies and rigs drilling new wells over 500 feet also universally present an imminent danger."

Josh Reichert, managing director of the Pew Environment Group, said the ruling should be rescinded if Feldman still has investments in companies that could benefit.

"If Judge Feldman has any investments in oil and gas operators in the Gulf, it represents a flagrant conflict of interest," Reichert said.

Feldman's ruling prohibits federal officials from enforcing the moratorium until a trial is held. He wrote: "If some drilling equipment parts are flawed, is it rational to say all are? Are all airplanes a danger because one was? All oil tankers like Exxon Valdez? All trains? All mines? That sort of thinking seems heavy-handed, and rather overbearing."

At least two major oil companies, Shell and Marathon, said they would wait to see how the appeals play out before resuming drilling.

The lawsuit was filed by Hornbeck Offshore Services of Covington, La. CEO Todd Hornbeck said after the ruling that he is looking forward to getting back to work. "It's the right thing for not only the industry but the country," he said.

Earlier in the day, executives at a major oil conference in London warned that the moratorium would cripple world energy supplies. Steven Newman, president and CEO of Transocean, called it unnecessary and an overreaction.

"There are things the administration could implement today that would allow the industry to go back to work tomorrow without an arbitrary six-month time limit," Newman said.

BP stock dropped 81 cents Tuesday, or 2.7 percent, to $29.52, near a 14-year low for the company in U.S. trading. The stocks of other companies associated with the spill remained low despite Feldman's ruling.

Feldman is a native of St. Louis and former Army captain in the Judge Advocate General Corps who was appointed in May to a seven-year term on the Foreign Intelligence Surveillance Court, according to court records.

The court meets secretly to consider government requests for wiretaps in national security cases, such as those involving foreign terrorist groups.

A graduate of Tulane University in New Orleans with bachelor's and law degrees, Feldman frequently jokes with lawyers before his court about his friendship with Supreme Court Justice Antonin Scalia, known for his strict interpretation of the Constitution as written more than 200 years ago.

Feldman has handled several cases stemming from Hurricane Katrina, among them a lawsuit against the city of New Orleans filed by a retired teacher who sued over his beating by police officers in the French Quarter. The case was settled. Feldman also presided over the first trial in a wave of insurance litigation spawned by the storm.