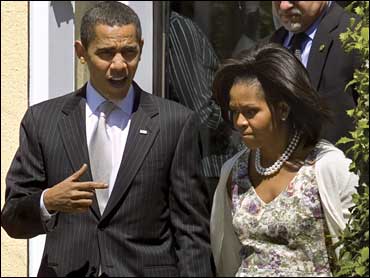 The White House today responded to news that nearly one in five Americans erroneously believe President Obama is a Muslim by telling reporters that the president prays on a daily basis.

"The President is obviously a -- is Christian," Deputy Press Secretary Bill Burton said. "He prays every day. He communicates with his religious advisor every single day. There's a group of pastors that he takes counsel from on a regular basis. And his faith is very important to him, but it's not something that is a topic of conversation every single day."

Asked why people believe despite this that Mr. Obama is a Muslim, Burton responded, "I just think people are focused on other issues and not paying all that much attention to exactly what the President does with his spirituality. But as you all know and have covered extensively, he is Christian and his faith is very important to him."

A reporter asked if the president might want to "speak more about his religion to counter this perception that he isn't Christian."

"He has talked about his faith in the past," the reporter said. "Could the White House have him come out and talk about it more?"

"He has spoken about his faith extensively in the past," Burton replied. "You can bet that he'll talk about his faith again. You could always play the 'would-of, could-of, should-of,' but the President's top priority here isn't making sure that Americans know what a devout Christian he is, it's making sure that we're getting the economy on track and we're creating jobs in this country."

The Pew poll showed that nearly one in five Americansbelieve that President Obama is a Muslim. The percentage that correctly identifies him as Christian has fallen to just 34 percent, while 43 percent say they don't know what his religion is - an increase of nine points from last year.

Burton made the comments aboard Air Force One on route to Martha's Vineyard, where the first family is beginning a ten-day vacation.

Asked about the president's planned workload, Burton responded, "Well, he'll continue to get his intelligence briefings, and he'll also be getting briefings on the economy and other issues as they come up. But as any of you guys who have covered these vacations before know, there's other things that come up and he'll obviously attend to those as necessary."