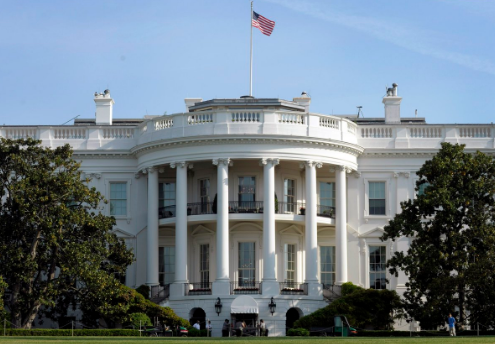 After a succession of administrations that embraced Spanish-language content, President Donald Trump's White House is all but ignoring Spanish speakers even though he has a robust online presence in English.

His administration has yet to offer a Spanish White House website. It has eliminated the position of director of Hispanic media outreach. And its Spanish-language Twitter account is heavy with English text and features sloppy translations.

White House press secretary Sean Spicer said in January that the administration had its "IT folks working overtime" to roll out a new Spanish language site after WhiteHouse.gov/espanol went dark in the hours after Trump took office.

"Trust me, it's going to take a little bit more time, but we're working piece by piece to get that done," Spicer said at the time. More than five months later, the site still urges readers to "STAY TUNED."

The account has tweeted just 41 times since Trump's inauguration; more than one-third of those posts came on the day of his address to a joint session of Congress on Feb. 28. Of the 41 tweets, about half were written in English. The Spanish tweets are sprinkled with typos — 11 in all. While most mistakes are minor flubs such as missing accents, those accents often change the meaning of words significantly. For instance, they turn "medical" into "medicate" or "is" into "this."

Notably, one of the first agencies to expand Spanish-language content during the Trump era has been U.S. Immigration and Customs Enforcement. The agency better known as ICE is responsible for carrying out deportations. Last month, it announced that it was expanding the Spanish section of its website and started a new Spanish twitter feed, @ICEespanol.

The White House director of media affairs, Helen Aguirre Ferre, said she expects a Spanish website to launch later this year. She noted the Obama administration took nine months to launch its version, adding that "the priority remains to improve the English language website."

She said there was no plan to hire a press officer solely dedicated to Spanish-language media at this time. She said she and another staffer in the communications operation are bilingual and conduct interviews in Spanish. Spanish-language media are also invited to participate in press briefings, background briefings and other events, along with their English-language colleagues, she said.

Luis Miranda, director of Hispanic media at the White House during the Obama administration, said the Obama-era Spanish-language website was not just a translation of the English site, but included information geared to Latinos on topics such as immigration, health issues, banking and veterans affairs.

"For us it was important that all of our constituents across the board were getting as much information as possible about what we were doing," he said.

Still, the Obama White House received some criticism for using Spanglish in its initial website on his health overhaul.

Activists see the lack of Spanish content as part of a larger pattern by Trump and the administration.

"I believe they have written off the Latino vote as, 'I'm never going to get it, so why should I even bother?'" said Luis A. Miranda Jr., a Democratic strategist who has worked for Democrat Hillary Clinton as well as Republican Rudy Giuliani, the former mayor of New York. (The two Mirandas are not related.)

During his campaign, Trump turned off many Latinos with his harsh anti-immigration rhetoric. Five months after taking office however, his campaign promise, which caused a stir with his Mexican counterparts, for a "big, beautiful" border wall has yet to materialize after failing to secure funding.  Congress did not include money for the wall it its 2017 budget, and it remains to be seen whether the wall will ever be funded.

Trump also criticized rival Jeb Bush for answering a reporter's question in Spanish, saying the former Florida governor "should really set the example by speaking English while in the United States."

"We have a country, where, to assimilate, you have to speak English. And I think that where he was, and the way it came out didn't sound right to me," Trump said during one Republican primary debate.

Trump still won about 28 percent of the Latino vote, similar to Mitt Romney in 2012, according to exit polls.

Roberto Izurieta, director of Latin American Projects at George Washington University, said that since Trump began his campaign, his rhetoric has been "very aggressive and very anti-Hispanic."

"The president decided on Day One to stay with his electoral base. It means he will keep his divisive rhetoric and stay with his base, which is anti-immigrant," he said.

Javier Palomarez, president of the U.S. Hispanic Chamber of Commerce, was a vocal critic of Trump during the campaign. But he said he has been pleasantly surprised by the administration's other Hispanic outreach efforts.

While Spanish-language communication is "important in terms of optics," he said, "at the end of the day, where the rubber meets the road for us and what matters to us is what kind of policy are you enacting, are you engaged with us."

He said his members' conversations with the White House have been "constant, consistent and ongoing," with numerous in-person meetings with White House and Cabinet officials, including Trump's daughter, Ivanka Trump, and weekly phone calls with Jennifer Korn, deputy director for the White House Office of Public Liaison.

"They have been more than willing to talk to us and engage us," he said. "This is the same level or more access that we had with the Obama administration."