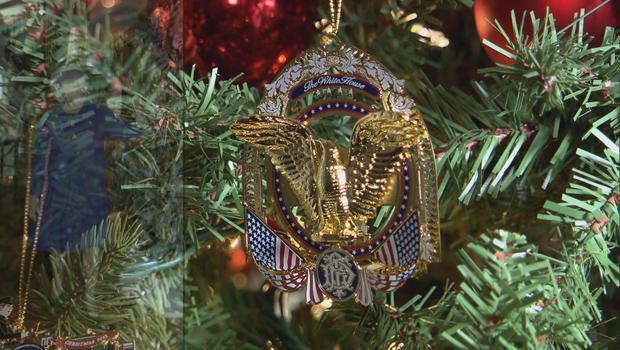 'TIS THE SEASON for Christmas decorations and ornaments. Rita Braver checks out how the White House is celebrating:

At first glance it's just a beautifully bedecked Christmas tree. But look a little closer, and you'll realize that some of these trinkets tell tales straight from the White House.

One ornament depicts Santa Claus, and says, "I've come because I hear there are children in the White House." Teddy Roosevelt's six children are all depicted on the reverse of this ornament.

The non-partisan, non-profit White House Historical Association was founded by first lady Jacqueline Kennedy, in part to raise private funds for furnishing and renovations of the White House. But it was Nancy Reagan who launched the idea of selling White House Christmas Ornaments.

The first was a simple angel. But then the Association started honoring each president, sequentially, beginning with a dove copied from the weather vane at George Washington's Mount Vernon estate.

Over the years, color is introduced, and the ornaments become more elaborate. "Get along to President Abraham Lincoln, and you have his beautiful portrait done by George Healy that now hangs over the mantel in the State Dining Room," said Stewart McLaurin, president of the White House Historical Association, who showed off the ornament's surprise: a hinged frame.

Christmas trees have proved to be the most popular ornaments. One, in fact, lights up, because Calvin Coolidge was the first President to decorate the National Christmas Tree with electric lights.

Braver said, "Sometimes the most beautiful and interesting ornaments relate to some of our least-known, and in some people's view, least distinguished presidents."

"Well, you know, we don't focus on the policies or the politics or even the popularity of a president," said McLaurin. "It's about the period of time in the White House that that president served."

Thus, the Herbert Hoover Ornament recalls, not the Great Depression, but Christmas Eve 1929, when a fire broke out in the White House during a children's Christmas party: "The president rushed out, they doused the fire with the help of Engine Company 1," said McLaurin. "But the next Christmas, the Hoovers invited those very same children back ... and they gave them a toy fire engine as a memento in the Christmas of 1930. And it is the replica of the fire engine that we represent in this ornament."

Since the beginning, the ornaments have been mostly made -- piece by piece, one by one -- at ChemArt in Providence, Rhode Island, owned by Richard Beaupre. He told Braver the first year of the ornaments his company produced 1,500, "compared to a million now!"

They retail for about $21. This year's ornament honors the presidency of Franklin Roosevelt -- the centerpiece, an American eagle that designer Sotarith Nong found in old White House photos.

First Ladies have traditionally hung the ornament of the year on one of the White House trees. Mrs. Trump hung this year's ornament in the library.

Once more, the White House Historical Association knows that these ornaments -- collected over the years by many families -- are going up all over the nation.

Braver asked, "What happens when you run out of presidents?"

"We will either start over, or we will come up with some other scheme," said McLaurin, "but we will continue doing the annual White House Christmas Ornament. I don't think it will ever end."