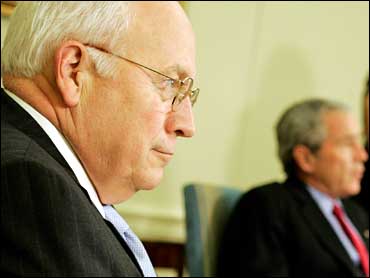 The White House on Friday defended Vice President Dick Cheney's decision not to cooperate with a government office charged with safeguarding national security information — and denied that Cheney ever suggested the agency be shut down.

Despite objections from the National Archives and others, presidential spokesmen say Cheney's office is not bound by certain sections of a presidential executive order that seeks to protect national security information generated by the government.

Under the order, executive branch offices are required to give the Information Security Oversight Office at the archives data on how much material they classify and declassify. Cheney's office provided the information in 2001 and 2002, then stopped.

White House deputy press secretary Dana Perino said it's clear that the president's executive order never intended for the vice president's office to be treated as an "agency."

"He's not exempt from following the laws of the United States," Perino said. "He's exempt just from this reporting requirement in this particular executive order."

Cheney's office claims it doesn't have to comply with the order because it is not an "agency" or "entity" within the executive branch, according to Henry Waxman, chairman of the House Committee on Oversight and Government Reform, which is investigating the matter.

Waxman scoffed at the assertion, calling it "an absurdity for the ages."

Court Watch: Is The VP's Office Above The Law?

"The vice president is pretending he isn't part of the executive branch and the White House is pretending that the rules for protecting classified information are being followed," he said in a statement.

"The vice president can't unilaterally decide he is his own branch of government and exempt himself from important, commonsense safeguards for protecting classified information. And he can't insist he has the powers of both the executive and the legislature branches but the responsibilities of neither. Our Constitution doesn't work that way," he said.

Attorney General Alberto Gonzales was asked in January to resolve the legal dispute, but he has not yet ruled on the issue.

Government secrecy specialists insist that Cheney's office is covered by the executive order and must report the number of times it classifies material and the number of pages it declassifies to the Information Security Oversight Office.

Steve Aftergood, director of the Federation of American Scientists' government secrecy project, said the executive order defines "agency" as any executive agency, military department and "any other entity within the executive branch that comes into the possession of classified information."

If Cheney's office is not part of the executive branch, "they're going to have to rewrite the textbooks," Aftergood said.

In an eight-page letter to Cheney on Thursday, Waxman said that J. William Leonard, director of the Information Security Oversight Office, told his committee that Cheney's advisers recommended that the executive order be amended to abolish the ISOO.

"I don't think that anyone has suggested that," Perino said.

In the letter, Waxman asked Cheney to respond to a series of questions about why he believes his office is exempt, and what steps his office has taken to ensure that national security information is protected.

However, according to Waxman, Leonard told the House panel that Cheney's office blocked the archives from doing an onsite inspection of his office in 2004 to make sure classified information was being properly protected.

Data from Cheney's office has not been included in the Information Security Oversight Office reports since it stopped reporting them after 2002.

A White House official said the vice president's office never believed it was required to file the reports, and that when it realized it had done so in 2001 and 2002, it ended the practice.