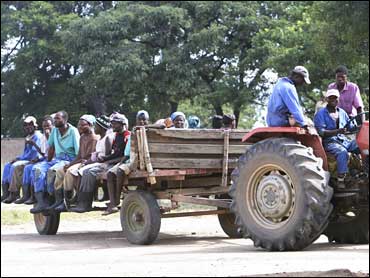 White farmers fled their farms across Zimbabwe on Tuesday amid escalating invasions by ruling party militants, farmers said, as President Robert Mugabe again appeared to be turning to violence to solidify his rule.

Mugabe, who has led Zimbabwe for 28 years with an increasingly dictatorial regime, has virtually conceded that he did not win the March 29 presidential elections.

Though results of the poll remain secret 10 days after the election, he already is campaigning for an expected runoff against opposition leader Morgan Tsvangirai by intimidating his foes and exploiting racial tensions.

At least 35 farmers have been forced off their land since Saturday, said Trevor Gifford, president of Zimbabwe's Commercial Farmer's Union. About a dozen more left on their own to avoid possible violence, he said.

"The situation is escalating very rapidly," he said, adding that many farmers were not allowed to take anything with them. "They had to leave their keys behind."

Mugabe's opponents pressed a lawsuit to force the publication of the results of the presidential election results that they say Tsvangirai won outright. The High Court ruled Tuesday that it would hear the petition urgently and was expected to hold a hearing in the afternoon.

U.N. Secretary-General Ban Ki-moon urged Zimbabwe's Electoral Commission to release the results of the presidential election "expeditiously and with transparency."

Mugabe's ruling party has called for a recount and a further delay in the release of results.

Police said they arrested five electoral officials on charges of tampering with election results, giving Mugabe some 4,993 votes less than were cast for him, The Herald newspaper reported. The paper said the alleged fraud occurred in four districts.

The opposition has urged the international community to persuade Mugabe to step down. But he appeared to be hunkering down.

African Union officials have been unable to get in touch with Mugabe in recent days, EU foreign policy chief Javier Solana told the European Parliament on Monday.

Over the weekend, Mugabe urged Zimbabweans to defend land previously seized from white farmers, and militants began invading some of the few remaining white-owned farms. Such land seizures started in 2000 as Mugabe's response to his first defeat at the polls - a loss in a referendum designed to entrench his presidential powers.

Farmers' union spokesman Mike Clark said Tuesday the invasions were happening "all over now." The group says the intruders are being ferried in from other areas on buses and trucks and police are only sporadically taking action.

Uys Van der Westhuizen said he fled his tobacco farm in the Centenary area Monday morning with his wife and four children.

"These guys pitched up at 6 o'clock and basically told us to get out," he said in a phone interview from Harare.

About 150 "thugs, mostly in their early 20s, maybe 25," armed with sticks and machetes beat drums as they moved onto the farm in an effort to intimidate his family. The invaders locked up his workers in one of the farm buildings and beat one of his foremen, he said.

Van der Westhuizen said he was in touch with some of his farm staff using cell phone text messages.

"They say about 25 people are camping between my house and my workshop," he said.

All his neighbors had been forced out or fled as well, he said.

"There's nobody there. Not one white commercial farmer," he said.

Mugabe's land reform program was supposed to take large commercial farms - much of the country's most fertile land - owned by about 4,500 whites and redistribute it to poor blacks. Instead, he gave the land to ruling party leaders, security chiefs, relatives and friends.

The land redistribution destroyed the food exporter's agricultural sector and sent the economy into freefall. Today, a third of Zimbabweans depend on international food handouts, and another third have fled abroad looking for work or political asylum.

Eighty percent of Zimbabwe's workers don't have jobs, and the country suffers chronic shortages of medicine, food, fuel, water and electricity as inflation blazes at 100,000 percent a year.

The elites, who still live in luxury, want to keep Mugabe in power to ensure their continued access to land, government contracts and business licenses. Some also fear an opposition government could prosecute Mugabe loyalists, including security chiefs involved in the 1980s subjugation of the minority Ndebele tribe that killed tens of thousands.

Tsvangirai has expressed concerns that Mugabe will mobilize the armed forces, youth brigades and war veterans to terrorize voters into supporting the president in a runoff. Government officials have played down fears of violence, but Mugabe has resorted to such tactics as campaign tools in previous elections.