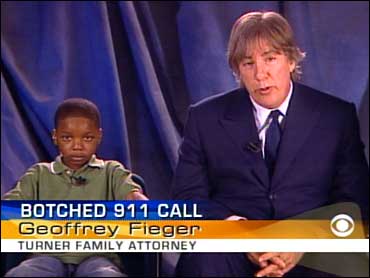 Robert Turner was only 5-years old when his mother collapsed at their home in Detroit, but he knew what to do in an emergency. He called 911 for help. But, as the tapes of those calls show, he couldn't convince the operator he was really in trouble.

Dispatcher: "Let me speak to him."

Dispatcher: "OK, well, I'm going to send the police to your house and find out what's going on with you ..."

Dispatcher: "Where's the grown-up at?"

Dispatcher: "Let me speak to her before I send the police over there."

Dispatcher: "I don't care, you shouldn't be playing on the phone." / "Now put her on the phone before I send the police out there to knock on the door and you're going to be in trouble."

Robert's mother, who suffered from an enlarged heart, was dead by the time police arrived. Now the Turner family has hired attorney Geoffrey Fieger to file a wrongful death suit against the city.

Fieger, along with Robert, who is now 6, joined The Early Show to talk about how this tragedy might have been avoided.

"Had somebody even followed up and sent a policeman like they did on the later call, really, to admonish Robert, rather than to help his mother, perhaps we wouldn't be here," Fieger told co-anchor Hannah Storm. "But no one came at all. All that happened was that Robert was threatened and, really, intimidated from doing what his mother had taught him to do, which was to make an emergency call in an emergency situation."

Different dispatchers handled Robert's two calls, Kimberly Harris, a 911 operator and president of Local 1023 of the American Federation of State, County and Municipal Employees union, said Sunday. Detroit police are investigating the 911 response but, so far, have not identified the operators.

Fieger told Storm, "We believe firmly that (Robert's) mom would have survived had help come within those critical few minutes," and said the lawsuit should help to highlight a tragic flaw in the 911 system. "We also are going to show that this is not an isolated occurrence. This is happening much more often than people think. And if this tape didn't exist, no one would believe Robert."