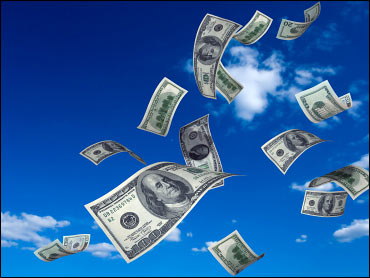 Think you could borrow money from a bank without saying what you were going to do with it? Well, apparently when banks borrow from you they don't feel the same need to say how the money is spent.

After receiving billions in aid from U.S. taxpayers, the nation's largest banks say they can't track exactly how they're spending it. Some won't even talk about it.

"We're choosing not to disclose that," said Kevin Heine, spokesman for Bank of New York Mellon, which received about $3 billion.

Thomas Kelly, a spokesman for JPMorgan Chase, which received $25 billion in emergency bailout money, said that while some of the money was lent, some was not, and the bank has not given any accounting of exactly how the money is being used.

"We have not disclosed that to the public. We're declining to," Kelly said.

The Associated Press contacted 21 banks that received at least $1 billion in government money and asked four questions: How much has been spent? What was it spent on? How much is being held in savings, and what's the plan for the rest?

None of the banks provided specific answers.

Some banks said they simply didn't know where the money was going.

"We manage our capital in its aggregate," said Regions Financial Corp. spokesman Tim Deighton, who said the Birmingham, Ala.-based company is not tracking how it is spending the $3.5 billion it received as part of the financial bailout.

The answers highlight the secrecy surrounding the Troubled Asset Relief Program, which earmarked $700 billion - about the size of the Netherlands' economy - to help rescue the financial industry. The Treasury Department has been using the money to buy stock in U.S. banks, hoping that the sudden inflow of cash will get banks to start lending money.

There has been no accounting of how banks spend that money. Lawmakers summoned bank executives to Capitol Hill last month and implored them to lend the money - not to hoard it or spend it on corporate bonuses, junkets or to buy other banks. But there is no process in place to make sure that's happening and there are no consequences for banks that don't comply.

Meanwhile, banks that are getting taxpayer bailouts awarded their top executives nearly $1.6 billion in salaries, bonuses, and other benefits last year, an Associated Press analysis revealed.

"It is entirely appropriate for the American people to know how their taxpayer dollars are being spent in private industry," said Elizabeth Warren, the top congressional watchdog overseeing the financial bailout.

But, at least for now, there's no way for taxpayers to find that out.

Pressured by the Bush administration to approve the money quickly, Congress attached nearly no strings to the $700 billion bailout in October. And the Treasury Department, which doles out the money, never asked banks how it would be spent.

"Those are legitimate questions that should have been asked on Day One," said Rep. Scott Garrett, R-N.J., a House Financial Services Committee member who opposed the bailout as it was rushed through Congress. "Where is the money going to go to? How is it going to be spent? When are we going to get a record on it?"

Nearly every bank AP questioned - including Citibank and Bank of America, two of the largest recipients of bailout money - responded with generic public relations statements explaining that the money was being used to strengthen balance sheets and continue making loans to ease the credit crisis.

But no bank provided even the most basic accounting for the federal money.

Some said the money couldn't be tracked. Bob Denham, a spokesman for North Carolina-based BB&T Corp., said the bailout money "doesn't have its own bucket." But he said taxpayer money wasn't used in the bank's recent purchase of a Florida insurance company. Asked how he could be sure, since the money wasn't being tracked, Denham said the bank would have made that deal regardless.

Others, such as Morgan Stanley spokeswoman Carissa Ramirez, offered to discuss the matter with reporters on condition of anonymity. When AP refused, Ramirez sent an e-mail saying: "We are going to decline to comment on your story."

Most banks wouldn't say why they were keeping the details secret.

"We're not sharing any other details. We're just not at this time," said Wendy Walker, a spokeswoman for Dallas-based Comerica Inc., which received $2.25 billion from the government.

One didn't even want to say they wouldn't say.

Heine, the New York Mellon Corp. spokesman who said he wouldn't share spending specifics, added: "I just would prefer if you wouldn't say that we're not going to discuss those details."

The banks which came closest to answering the questions were those, such as U.S. Bancorp and Huntington Bancshares Inc., that only recently received the money and have yet to spend it. But neither provided anything more than a generic summary of how the money would be spent.

Lawmakers say they want to tighten restrictions on the remaining, yet-to-be-released $350 billion block of bailout money before more cash is handed out. Treasury Secretary Henry Paulson said the department is trying to step up its monitoring of bank spending.

"What we've been doing here is moving, I think, with lightning speed to put necessary programs in place, to develop them, implement them, and then we need to monitor them while we're doing this," Paulson said at a recent forum in New York. "So we're building this organization as we're going."

Warren, the congressional watchdog appointed by Democrats, said her oversight panel will try to force the banks to say where they've spent the money.

"It would take a lot of nerve not to give answers," she said.

But Warren said she's surprised she even has to ask.

"If the appropriate restrictions were put on the money to begin with, if the appropriate transparency was in place, then we wouldn't be in a position where you're trying to call every recipient and get the basic information that should already be in public documents," she said.

Garrett, the New Jersey congressman, said the nation might never get a clear answer on where hundreds of billions of dollars went.

Home listings surge as some buyers are pushed to sidelines