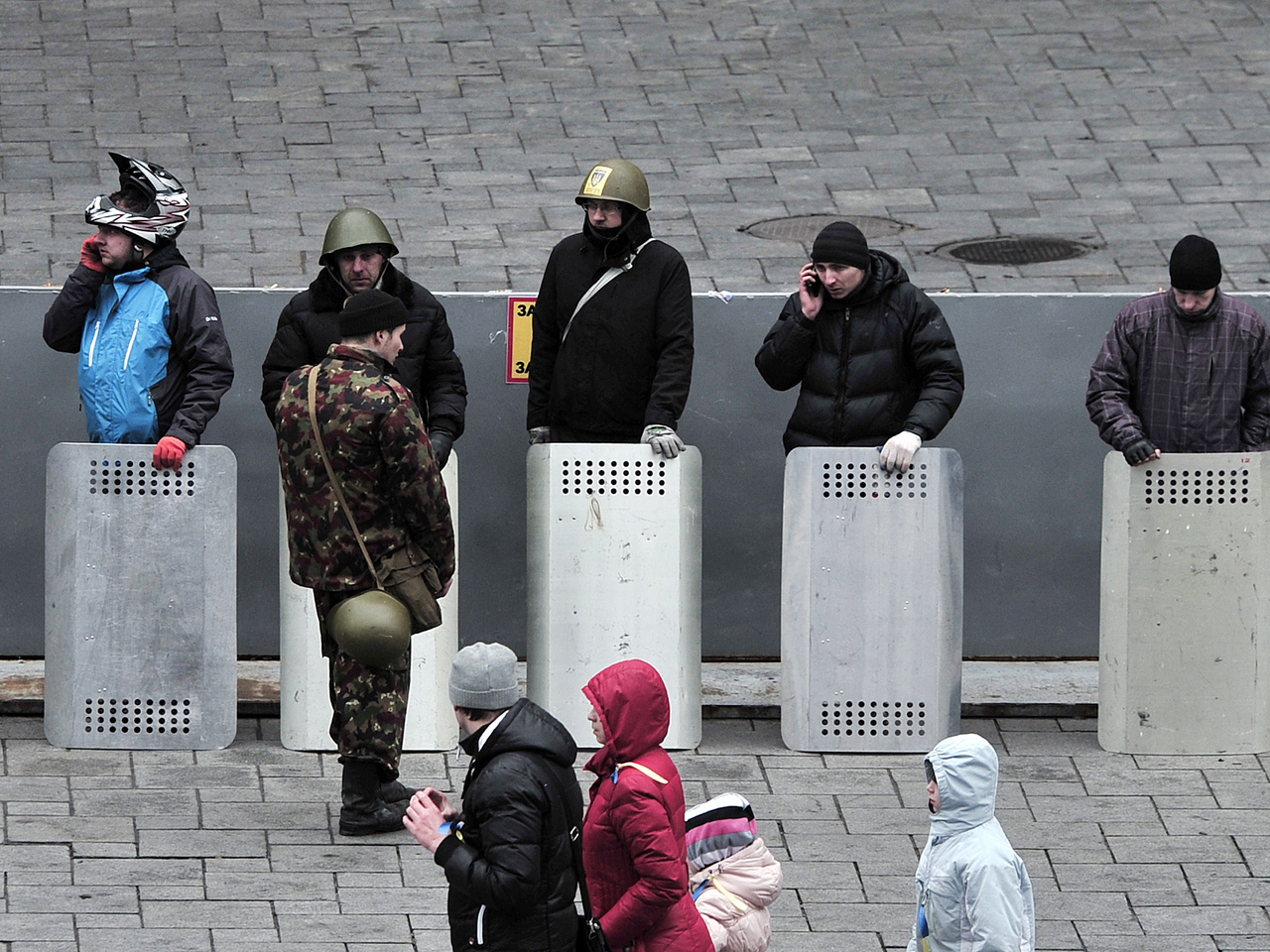 The whereabouts and legitimacy of President Viktor Yanukovych are unclear after he left the capital for his support base in eastern Ukraine. He maintains that parliament's decisions in recent days are illegal, and a top presidential aide told The Associated Press on Sunday that he will continue to fulfill his presidential duties.

The newly emboldened parliament, now dominated by the opposition, struggled Sunday to work out who is in charge of the country. Fears percolated that some regions might try to break away, after three months of political crisis that has left scores of people dead in a country of strategic importance to the United States, European nations and Russia.

Ukraine is deeply divided between eastern regions that are largely pro-Russian and western areas that widely detest Yanukovych and long for closer ties with the European Union. Yanukovych's shelving of an agreement with the EU in November set off the wave of protests, but they quickly expanded their grievances to corruption, human rights abuses and calls for Yanukovych's resignation.

The Kiev protest camp at the center of the anti-Yanukovych movement filled with more and more dedicated demonstrators Sunday, setting up new tents after two days that saw a stunning reversal of fortune in Ukraine's political crisis.

Tymoshenko, the blond-braided heroine of Ukraine's 2004 Orange Revolution, increasingly appears to have the upper hand in the political battle, winning the backing Sunday of a leading Russian lawmaker and congratulations from German Chancellor Angela Merkel and U.S. senators on her release.

Russia's position will be important for the future of this country, since Moscow has been providing financing to keep Ukraine's economy afloat, and the two countries have deep but complicated ties.

Russia's finance minister on Sunday urged Ukraine to seek a loan from the International Monetary Fund to avoid an imminent default. Russia in December offered Ukraine a $15 billion bailout, but so far has provided only $3 billion, freezing further disbursements pending the outcome of the ongoing political crisis.

Russian legislator Leonid Slutsky said Sunday that naming Tymoshenko prime minister "would be useful for stabilizing" the tensions in Ukraine, according to Russian news agencies.

Tensions mounted in Crimea, where pro-Russian politicians are organizing rallies and forming protest units and have been demanding autonomy from Kiev. Russia maintains a big naval base in Crimea that has tangled relations between the countries for two decades.

The political crisis in this nation of 46 million has changed with blinding speed repeatedly in the past week. First there were signs that tensions were easing, followed by horrifying violence and then a deal signed under pressure from European diplomats that aimed to resolve the conflict but left the unity of the country in question.

"We need to catch and punish those with blood on their hands," Artyom Zhilyansky, a 45-year-old engineer on Independence Square on Sunday, referring to those killed in clashes with police last week.

He and other protesters called for law enforcement chiefs to be held accountable and Yanukovych put on trial.

The parliament, in a special session Sunday, voted overwhelmingly to temporarily hand the president's powers to speaker Oleksandr Turchinov, a top ally of Tymoshenko.

The legislators also voted to remove a string of government ministers and may name a prime minister later Sunday.  Tymoshenko's name circulated as a strong possibility.

The legitimacy of the parliament's flurry of decisions in recent days is under question. The votes are based on a decision Friday to return to a 10-year-old constitution that grants parliament greater powers. Yanukovych has not signed that decision into law, and he said Saturday that the parliament is now acting illegally.

However, legal experts said that de facto the parliament is now in charge.

Ihor Koliushko, head of the Center for Political and Legal reform, said that given the president's absence from Kiev and the exceptional situation, "I think it would be right to say that we don't have a head of the state, but the president's duties are being carried out ... by the head of the Verkhovna Rada," or parliament.

Yanukovych, who spoke on television Saturday in Kharkiv, accused his opponents of trying to overthrow the government.

Presidential aide Hanna Herman told The Associated Press on Sunday that Yanukovych was in the eastern Ukrainian city of Kharkiv as of Saturday night and plans to stay in power. Still, Herman sought to distance herself from him somewhat Sunday, as did his party.

In Kiev's protest camp, self-defense units that have taken control of the capital peacefully changed shifts Sunday. Helmeted and wearing makeshift shields, they have replaced police guarding the president's administration and parliament, and have sought to stop radical forces from inflicting damage or unleashing violence.

Ukrainians' loyalties remain divided. Emotions mounted around statues of Soviet founder Vladimir Lenin, after angry protesters took them down in several towns and cities. On Sunday, some pro-Russian protesters took up positions to defend Lenin statues in Donetsk and Kharkiv. Statues of Lenin still stand across the former U.S.S.R., and they are seen as a symbol of Moscow's rule.

Parliament set new presidential elections for May 25, and Tymoshenko says she will run.

Tymoshenko, whose diadem of blond peasant braids and stirring rhetoric attracted world attention in the 2004 Orange Revolution, spoke late Saturday night to a crowd of about 50,000 on Kiev's Independence Square, where a sprawling protest tent camp was set up in December. Sitting in a wheelchair because of a back problem aggravated during imprisonment, her voice cracked and her face was careworn.

But her words were vivid, praising the protesters who were killed this week in clashes with police that included sniper fire and entreating the living to keep the camp going.

"You are heroes, you are the best thing in Ukraine!" she said of the victims.

The Health Ministry said the death toll in clashes between protesters and police that included sniper attacks had reached 82 over the last week. The protesters put that figure at over 100.

European officials urged calm. Ukraine's defense and military officials also called for Ukrainians to stay peaceful but did not clearly come on the side of the president or opposition.

The past week has seen the worst violence in Ukraine since the breakup of the Soviet Union a quarter-century ago. Orthodox priests held services Sunday to honor the dead.