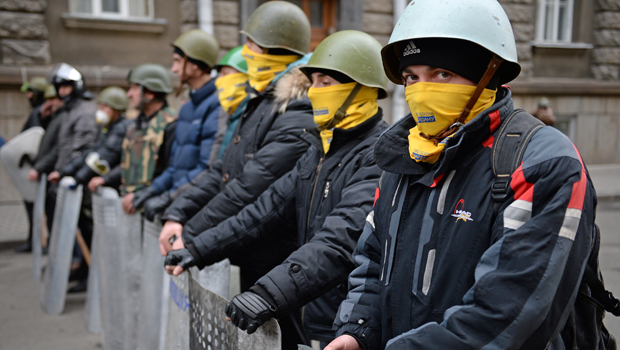 KIEV, Ukraine -- Protesters took control of Ukraine's capital on Saturday, seizing the president's office as parliament sought to oust him and form a new government. An aide to President Viktor Yanukovych said he had left Kiev for his support base in the country's Russian-speaking east, but that he has no intention of abandoning power.

CBS News correspondent Holly Williams reports from Kiev that the ministry that controls the police force said it now serves the Ukrainian people and shares their desire for speedy change.

In a special parliament session, lawmakers warned that the country risks being split in two. The country's western regions want to be closer to the EU and have rejected Yanukovych's authority in many cities, while eastern Ukraine - which accounts for the bulk of the nation's economic output - favors closer ties with Russia.

"The people have risen up and achieved their goals. The authorities are crumbling. Victory is in sight," 31-year-old construction worker Sviatoslav Gordichenko said outside a residential compound believed to belong to Yanukovych,

A top aide to Yanukovych said that the president has left Kiev and gone back to Kharkiv, a city in Ukraine's east which is the heart of his support base.

"As much as some people want it, he has no intention to leave the country," Hanna Herman, a close Yanukovych ally, told the AP. She said the president was to meet voters in the region and make a televised address.

The trip comes a day after Yanukovych and opposition leaders signed a European-brokered agreement aimed at resolving the months-old political crisis that has killed scores and injured hundreds. The agreement calls for early elections and constitutional reforms that reduce the president's powers.

The protesters, who are angry over corruption and want Ukraine to move toward Europe rather than Russia, claimed full control of Kiev and took up positions around the president's office and a grandiose residential compound believed to be his, though he never acknowledged it.

At the sprawling suburban Kiev compound, protesters stood guard and blocked more radical elements among them from entering the building, fearing unrest. Moderate protesters have sought to prevent their comrades from looting or taking up the weapons that have filled Kiev in recent weeks.

The compound became an emblem of the secrecy and arrogance that defines Yanukovych's presidency, painting him as a leader who basks in splendor while his country's economy suffers and his opponents are jailed. An AP journalist visiting the grounds Saturday saw manicured lawns, a pond, several luxurious houses and the big mansion itself, an elaborate confection of five stories with marble columns.

Protesters attached a Ukrainian flag to a lamppost at the compound, shouting: "Glory to Ukraine!"

A group of protesters in helmets and shields stood guard at the president's office Saturday. No police were in sight.

Protest leader Andriy Parubiy was quoted by the Interfax news agency as saying that protesters were in full control of the capital on Saturday. Police on Friday retreated from their positions in Kiev's government district, and the night passed quietly.

Ukraine's parliament, only a day ago controlled by Yanukovych supporters, seemed to be taking control of the country's leadership.

It was considering whether to impeach him or force his resignation, and whether to set a quick date for new elections to end the three-month standoff that has turned into a national crisis over Ukraine's identity and direction.

Despite significant concessions by Yanukovych on Friday, protesters said his offer to hold elections late this year isn't enough.

"Resign! Resign!" chanted protesters on Independence Square, the nucleus of the protest movement. Protesters at the square, known as the Maidan, heaped flowers on coffins of those killed in clashes with police Thursday.

The parliament speaker - Yanukovych ally Volodymyr Rybak - submitted his resignation, citing ill health. The president's representative in parliament warned against splitting the country in two, an outcome that worries many but is increasingly seeming like a possibility.

The president's concessions came as part of a deal Friday intended to end violence that killed scores and left hundreds wounded in Kiev this week as snipers opened fire on protesters. It was the worst violence in Ukraine's modern history.

Neither side won all the points it sought in Friday's deal, and some vague conditions left room for strong disputes down the road.

The agreement signed Friday calls for presidential elections to be moved up from March 2015 to no later than December, but many protesters said that is far too late. And it does not address the issue that triggered the protests in November - Yanukovych's abandonment of closer ties with the European Union in favor of a bailout deal with longtime ruler Russia.

The standoff between the government and protesters escalated this week, as demonstrators clashed with police and snipers opened fire in the worst violence the country has seen since the breakup of the Soviet Union a quarter-century ago. The Health Ministry put the death toll at 77 and some opposition figures said it's even higher.

The parliament on Friday quickly approved a measure that could free Yanukovych's arch-rival and former prime minister Yulia Tymoshenko, who has served 2 1/2 years on a conviction of abuse of office, charges that domestic and Western critics have denounced as a political vendetta.

Legislators voted to decriminalize the count under which Tymoshenko was imprisoned, meaning that she is no longer guilty of a criminal offense.

However, Yanukovych must still sign that bill into law, and then Tymoshenko's lawyers would have to ask the court for her release from prison in Kharkiv, the city controlled by Yanukovych's loyalists where the opposition has little public following.