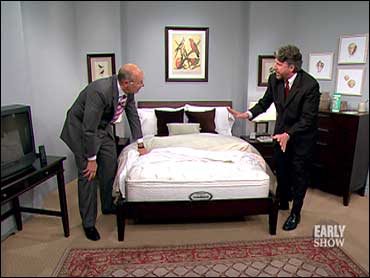 Now that summer is just about here, more families will be spending time in hotel rooms.

While they might look clean, and you'd like to believe they are, the truth is they're probably teaming with germs, says Travel + Leisure Family magazine Senior Consulting Editor Mark Orwoll.

The magazine took a look at hotel room germs, and how to eradicate or steer clear of them, and Orwoll shared the information on The Early Show Tuesday.

He observes that a lot of travelers assume a hotel bathroom may not be as clean as their own, that germs may linger on the carpets or the bedspread, but few people think twice about the room's light switch. That's right, the light switch!

Sheets are regularly laundered and changed, and showers scrubbed, but it's unlikely that hotel maids are wiping down hard surfaces such as doorknobs and light switches, alarm clocks, ice buckets or hotel-inscribed pens.

Cold viruses, e. coli and other icky germs can live on hard surfaces for a day or longer. This means if the person who stayed in the room before you had a cold, there's a chance you'll get sick too.

Now, there's no need for panic, Orwoll stresses. Everywhere you go — the office, the mall, a school — you're going to encounter these germs. But people like to delude themselves into thinking that hotel rooms are cleaner than they really are.

After all, who wants to get sick on vacation?

So, how can you combat these germs? Orwoll suggests bringing along a package of anti-bacterial wipes, such as those from Clorox and Lysol and, when you first walk into a hotel room, giving all surfaces, including the shower floor and sink faucets, a quick wipe down. Also, you can't underestimate the importance of washing your hands regularly.

What about hotel beds? Many people assume that bedspreads in particular are teaming with germs. These people are right, Orwoll says. Bedspreads aren't routinely washed, so you should take them off the beds and stash them in the corner. If you're cold, ask for another blanket. The good news here is that more hotels are replacing their bedspreads with comforters and duvet covers. These duvet covers are washed as regularly as sheets, so if your bed has one of these you don't need to remove it.

The other unpleasant issue you need to consider is bedbugs. Bedbugs were virtually eradicated in the United States after World War II, but they've returned to every state, and to luxury and budget hotels alike. Bedbugs are hard to get rid of, and if you contract them in your hotel, you're almost certain to carry them back to your home in your clothing and suitcases.

Orwoll recommends pulling back all the sheets from the bed and inspecting your mattress; be sure to closely examine the mattress seams. Look for little red or brown spots, which could be a sign that bedbugs have been there. Sometimes, you can see the bugs themselves; they grow to the size of apple seeds. A flashlight can make it easier to find these pests. Another great trick is to aim a hairdryer at a spot on the mattress for a couple of minutes. Bedbugs are attracted to heat, so if they've burrowed into your mattress, the hair dryer will draw them out. More and more hotels are encasing mattresses and pillows in plastic (this also helps stave off dust mites), which makes it impossible for bed bugs to take up residency.

As you might suspect, there are indeed germs left behind in hotel bathrooms. As mentioned earlier, running an anti-bacterial wipe across most of the surfaces is all you need to do to feel clean and safe.

However, there is one big thing to avoid in hotel bathrooms: whirlpool tubs. These may seem like a luxury if you don't have one at home, and kids certainly think they're fun. But Orwell says to never, ever, ever use the whirlpool function in a hotel.

"In one study, 100 percent of water samples taken from whirlpool tubs tested positive for agents that can cause rashes, urinary-tract infections, or pneumonia," Travel + Leisure writes. "The pipes of the whirlpool, rather than the tub itself, are where the germs hide." At home, you would regularly flush these pipes with bleach, but that's simply not happening in hotels.

Orwoll also recommends wearing flip flops in the shower, to avoid any chance of contracting athlete's foot. As a matter of fact, he thinks it's smart to always wear socks or slippers around a hotel room.

For the record, Orwoll takes all of his own advice whenever he visits a hotel room, from checking for bedbugs to cleaning hard surfaces with anti-bacterial wipes and never going barefoot.

Polar vortex will make parts of the U.S. colder than South Pole