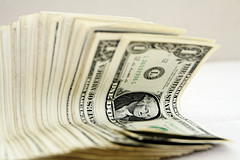 There are more than 45 million people in the U.S. who have jobs in sales. These include not only sales professionals, but business owners, entrepreneurs and those in related occupations whose businesses live and die by getting money to flow toward the opportunities they represent.

But where are all these sales jobs? According to the 2010 U.S. Census, the U.S. Department of Labor and private research foundations, here is the breakdown:

1. There are 22.6 million self-employed professionals, consultants and business owners who make deals to land clients and contracts. This is a growing segment as the economy has been morphing. If these people don't sell, they don't eat.

3. Remember the 5.8 million corporate CEOs -- the chief dealmakers of their organizations. The CEO is the chief sales officer of any organization. (Not that I recommend they be taken on sales calls.)

4. Surprisingly, many forget the 1 million business transaction attorneys who close deals on behalf of clients and for themselves. As the old cliche goes, these are the dealmaker, not the dealbreaker, types of attorneys.

5. Another group to count are the 565,000 entrepreneurs who create new businesses every month in America, according to the Ewing Marion Kauffman Foundation. As management guru Peter Drucker said, the No. 1 job of a business is to create customers. Without customers, there is no business.

6. In addition, there are tens of thousands of people in the U.S. employed in venture capital firms, investment banks, business brokers and other facets of the mergers and acquisition industry. These are dealmakers who need keen selling skills. No sales equals no money -- but those who know sales know money.

My best advice for the 45 million people in sales jobs is to learn to sell as a team -- even you lone wolves and solopreneurs out there.

There is an advantage to having a group of people brainstorm your ideas and your presentations. Each member of your team sees in an individual way and can therefore pinpoint problems with -- or suggest added benefits to -- your solution. As a result, your sales presentations benefit from having creativity, imagination and energy it might not have otherwise. Of course, at many times these different eyes can be better eyes, seeing angles or hidden aspects in ways that greatly magnify the power of your solution.

Find a mentor. I have a client with whom I've worked closely for a number of years. When we started our journey, he was landing deals that were worth just under $1 million. He wanted bigger deals; his company had the capability to handle them, and he was raring to go. His first big deal was $30 million. Do you think after that he went back to producing $1 million deals every day? Of course he didn't. His regular size deal now is $10 million, and he's currently after a $50 million deal.

There is an advantage to having many contributions to the drafting of your presentations and written documents. Various voices also help in arriving at an overall tone for the sales you produce. It probably goes without saying that some of these voices will arrive at a much better way to express something than you would have thought of alone.

Many salespeople with whom I work on landing big deals have problems with the idea of needing a team. This is in no way a reflection on your sales abilities. You'll find that landing big deals will test your salesmanship beyond any previous tests, but it is the best sales job there is.