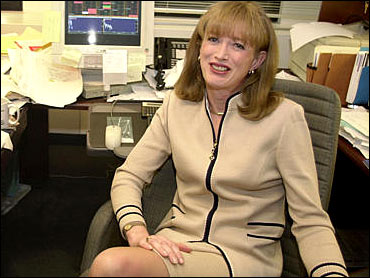 By June, people in the Quantitative Management department were trading whispers across the rows of cubicles.

What's wrong with Mark Stumpp? Why had he dropped so much weight so quickly? Was he sick? Nobody knew.

One day after lunch, Stumpp handed a small, framed snapshot to Jim Scott, his friend and co-manager in the department at Prudential Financial Inc. for 14 years.

"Do you know who that is?" Stumpp asked.

Scott glanced at the picture of a tall woman with blonde bangs and shook his head. He'd never seen her.

"That's the person you're going to be working with a year from now," Stumpp said.

Puzzled, Scott looked at the photo again, then back at Stumpp. The lady in the photograph, Stumpp said, is going to be me.

Prudential's QM department manages billions of dollars of other people's money. It's a business that relies on a nurtured image of solidity, on the value implicit in longtime relationships.

Stumpp was uncomfortable in Mark's body as far back as memories reach. Deep inside, at the nexus of body and mind, something felt terribly wrong.

"A malaise of the soul," Stumpp says.

It is called gender dysphoria, a condition characterized by intense feelings of being the wrong gender. No one knows for sure what causes it.

Since the 1960s, thousands of people have quietly undergone hormone treatment and surgery to change gender. Most dropped out of their previous lives, resurfacing somewhere else with new identities.

Today, "more and more people are recognizing that this is not something that they have to be ashamed of," says Eli Coleman, director of the Program in Human Sexuality at the University of Minnesota.

So perhaps it was just a matter of time before it happened at Prudential, a company with 61,000 people on its payroll. But in 22 years at Prudential, the last half working on personnel issues, Ron Andrews, a vice president of human resources, "had never encountered a more difficult issue."

"What was difficult about this," he said, "is I didn't know anything."

Stump, 51, had a reputation as one of the office's "class clowns." He dropped jokes into the middle of meetings, walked around the office without shoes, wore jeans when everyone else wore a suit.

But he was an acknowledged expert in the serious business of making money grow, and his department, a group of about 35 people, manages $32 billion on behalf of client pension funds and other institutional investors. Prudential's own $8 billion in pension funds is managed here.

"My business is about trust," Stumpp says, and he knew trust would not be enhanced people saw him "turn into a girl."

So for years, Stumpp postponed gender reassignment surgery. But in 1999, after seeing a therapist, he started taking estrogen and undergoing electrolysis — all part of a still reversible journey into what it might be like to be a woman.

It was two years before his co-workers began to notice he was changing — and to worry. The hormones were reshaping his body. Enlarged breasts could be hidden in loose-fitting shirts, but there was no way to disguise the disappearance of muscle.

In the summer of 2001, the few executives at Prudential who knew what was going on realized that the problem wasn't that Stumpp was changing his gender. It was that he was coming back to work afterward.

Someone was going to have to explain this delicate situation in Prudential's executive offices, to the company's clients, to the marketing and sales representatives who vouched for Stumpp's research.

Bringing it all together was Andrews' job.

Throughout the summer and into the fall, Andrews worked his way down a list of people who needed to know, figuring out not just who they would tell in turn, but how they would do it.

In one monthslong thread of calls, meeting and memos, he, company lawyers and sales managers drew up a list of 30 clients that relied on Stumpp's research and investment strategies.

They decided that a Prudential customer relationship manager would contact each one to explain who would soon be handling their money. And then Andrews and his group wrote a script — not word for word, but an extended outline with "key communication points."

"We wanted our clients and our customers not to hear this from some sort of grapevine," Andrews says. "We wanted to make sure they heard it from us."

In the QM department, though, Stumpp's story was still known only to Scott and another employee, Stacie Mintz. So, after Stumpp left on an unexplained medical leave in January 2002, Scott called the homes of everyone in the department.

"I need to talk to you about Mark," began each conversation.

Next morning, in the parking garage, Mintz ran into the co-worker she thought most likely to have a problem with the new Stumpp.

"Isn't that amazing about Mark?" Mintz said, and then held her breath for the answer.

A few days later, on Jan. 8, a two-page memo arrived in the e-mail box of everyone in the department.

The note poked fun at the situation, but also appealed for understanding. And it emphasized that returning to work was something Stumpp had a legal right to do.

"This will be new ground for all of us," Stumpp wrote. "However, if September 11 taught us anything, it was that life is far too precious and short. Each of us must strive to be at peace with ourselves."

She signed the note "Margaret."

The note leapfrogged around the company, and soon employees started e-mailing back. Many, including some top executives, expressed support. A few of the women offered to help Stumpp pick out clothes.

Some took more convincing. In the weeks before Stumpp's scheduled return date — Monday, Feb. 4 — Mintz says it felt like there was a line of co-workers at her door, mostly concerned about how to act when Mark walked in as Margaret.

Stumpp, recuperating at home, offered to return at first in men's clothes if it would make people more comfortable.

No, his fellow workers replied, if you're Maggie, then come back as Maggie. We're as ready as we'll ever be.

Maggie Stumpp made it to the fourth floor before nearly everyone else that first morning back. Her co-workers walked in and there she was, joking about the joy of being thin, of having to wear pantyhose, of how hard it had been to find shoes in her size.

"It was awkward, but ... it was kind of a relief to have it all out in the open, and to have all the questions about what she was going to look like answered," Mintz says.

It was a beginning.

One of the first trials came a few weeks after Stumpp's return, when they took a call from a longtime client, a labor union whose members' reputations did not gibe with her heels and pantyhose.

The union officials asked to meet Stumpp to reevaluate her suitability to continue managing their business. The department braced to lose the account.

They met over dinner at a steakhouse. The first few hours were spent discussing the stock market and the economy, smoothed over by a couple of drinks. Gradually, the men's doubts appeared to ease.

"You know, you really don't look so bad," one leaned over to tell Stumpp. She chalked it up as a compliment. Prudential kept the account.

Inside Prudential, however, there were still some tensions. To ease the uncertainties of some female colleagues, Andrews set aside a small bathroom for her for six months. After that she could use the women's room.

Six months and a day after Stumpp returned, a female employee protested Stumpp's presence in the adjoining stall of the women's room.

"Grow up!" Andrews told her, intentionally setting a tone. While the company did not expect all its employees to accept Stumpp personally, they would be expected to do so professionally.

There are still moments when Stumpp feels the stares, imagines that every woman at Prudential is rating her performance. There are inevitable stumbles and awkward moments.

"The hardest thing is the pronouns," Scott says. "It just drives me crazy.

Earlier this year, Mintz was digging around for an article that Jim Scott, Mark Stumpp and a colleague wrote in 1999 for an industry magazine. When she found it, she did a double-take. At Scott's discrete request, the article had been newly credited to Margaret Stumpp.

Stumpp isn't pretending such changes will erase the past. She's not denying a life as Mark, but she is eager to move on as Maggie.

There are times now when the phone in her office rings and the voice asks to speak to Mark. And depending on the nature of the call and her mood, she relishes a certain answer.