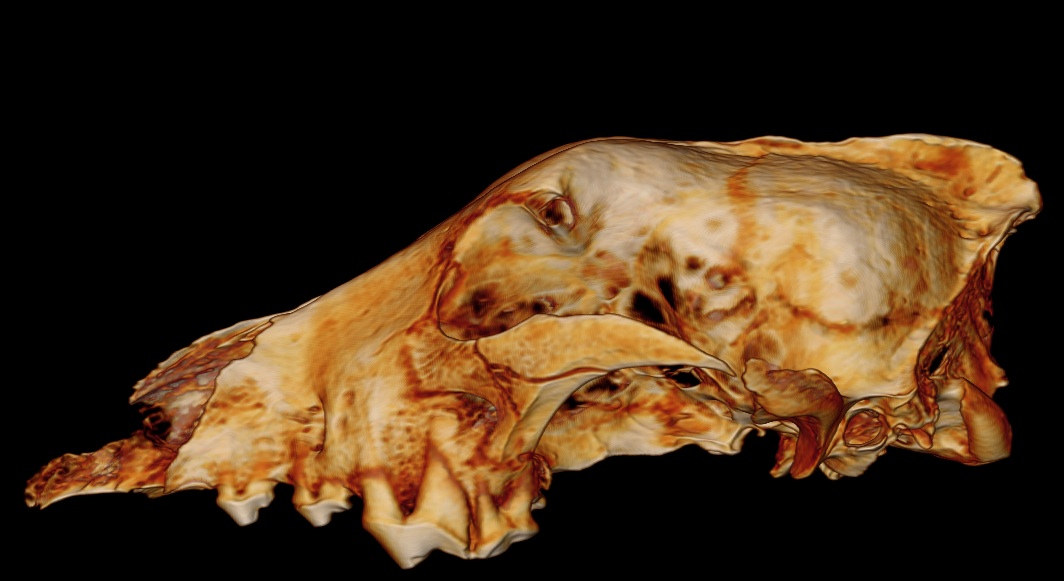 Man's best friend may have been domesticated about 15,000 years ago, evolving from wolves around the time that humans were establishing their first settlements, new evidence suggests.

Using sophisticated 3D imaging to analyze several fossil skulls, a study in this week's Nature Scientific Reports found dogs emerged much more recently than previously thought. Other studies in recent years had suggested dogs evolved as early as 30,000 years ago, a period known as the late Paleolithic, when humans were hunter-gatherers.

Abby Grace Drake, a biologist at Skidmore College and one of the co-authors of the latest study, said there is an abundance of evidence -- including the skulls as well as genetic and cultural evidence -- to show dogs arrived instead in the more recent period known as the Neolithic.

"The dog remains from the Neolithic are found buried with humans and adorned with ornaments such as necklaces of deer teeth," Drake told CBS news in an interview.

"Whether dogs were domesticated in the Paleolithic or the Neolithic creates two different scenarios for how domestication may have taken place," she explained. "In the Paleolithic humans were hunter-gatherers. In the Neolithic is when we started to build permanent settlements that would have required 'dumps.' These piles of food and human waste would have attracted scavengers. Some scientists propose that wolves that scavenged at these dumps would have access to valuable food and those that could tolerate the presence of humans would be more successful."

To come to this conclusion, Drake, along with Michael Coquerelle of the University Rey Juan Carlos and Guillaume Colombeau from the University of Bordeaux, reanalyzed two skulls as much as 32,000 years old from Russia and Belgium which had been identified as dogs. They used 3D technology to examine 36 points on the skull, including including the muzzle, palate, teeth, and braincase, as well as CT scans of the fossil skulls.

Then they compared those findings to the skulls of more than 100 other dog and wolves, including modern breeds.

The end result: those ancient skulls were from wolves, not dogs. Their findings called into question the theory that dogs had domesticated for 30,000 years.

"I have been using this 3D technique on dogs and wolves for my previous studies so I already had a very large database of skulls to compare the fossils to," Drake said. "Since I had this database I was curious as to how these early fossils would compare. Would they appear as primitive dogs? Dog-wolf hybrids? I was surprised when I discovered they were shaped like the wolf skulls."

Drake said this new 3D technique "allows us to test parts of the skull which were not measured before." The skulls had previously been only measured by caliper, which Drake said, "do not distinguish between dogs and wolves and miss important aspects of the skull such as the angle of the orbits and angle of the muzzle."

This is the latest chapter in a long-running debate over just when and where dogs were domesticated.

A 2013 study in PLOS One, looking at a different fossil skull found in the Altia Mountains of Siberia, concluded that dogs were domesticated 33,000 years ago. They based their findings on a genetic sequence from the skull compared with genetic sequences of 72 modern dogs from 70 breeds, 30 wolves, four coyotes and 35 prehistoric canid species from the Americas.

Armed with much more data, the researchers writing in Science later that year and using several of the same skulls concluded that dogs were domesticated in Europe about 18,000 to 32,000 years ago.

One of the authors on both studies, Olaf Thalmann of the University of Turku in Finland, responded to the new findings by saying that "every new measurement of the remains reveals a different story."

But while calling the study interesting, he remained unconvinced by the new evidence that dogs could have evolved as late as the Neolithic.

"I wonder, why Drake et al. argue that domestication must have happened later in time during the Neolithic instead of the late Pleistocene. The authors simply use a potential 'misclassification' of two samples to reject a hypothesis that has been supported by independent research before," he said in an e-mail to CBS News.

"At least a handful of genetic studies based on diverse markers (including complete genomes) has demonstrated that the onset of domestication must have occurred before at least 15,000 years ago," he said. "Aside from this genetic evidence I wonder, if the domestication originated in the Neolithic, say around 10,000 years, how would other fossils fit into the picture?" He cited the example of three specimens that appear to be much older.

Drake was confident in her findings, adding that several researchers had applauded their technique for bringing much greater accuracy to the work of assessing the skulls. But she admitted it by no means ends the debate on dog domestication -- noting that she had tried to test the Altia skull and was denied access by the scientists who said they are still examining it.

"Every time we find more fossil material, we will have test it with this new methodology," she said. "There also the fossil out there like the skull from Altai that we would also to examine to determine if it's a dog or wolf. We can't say unless we are able test it."