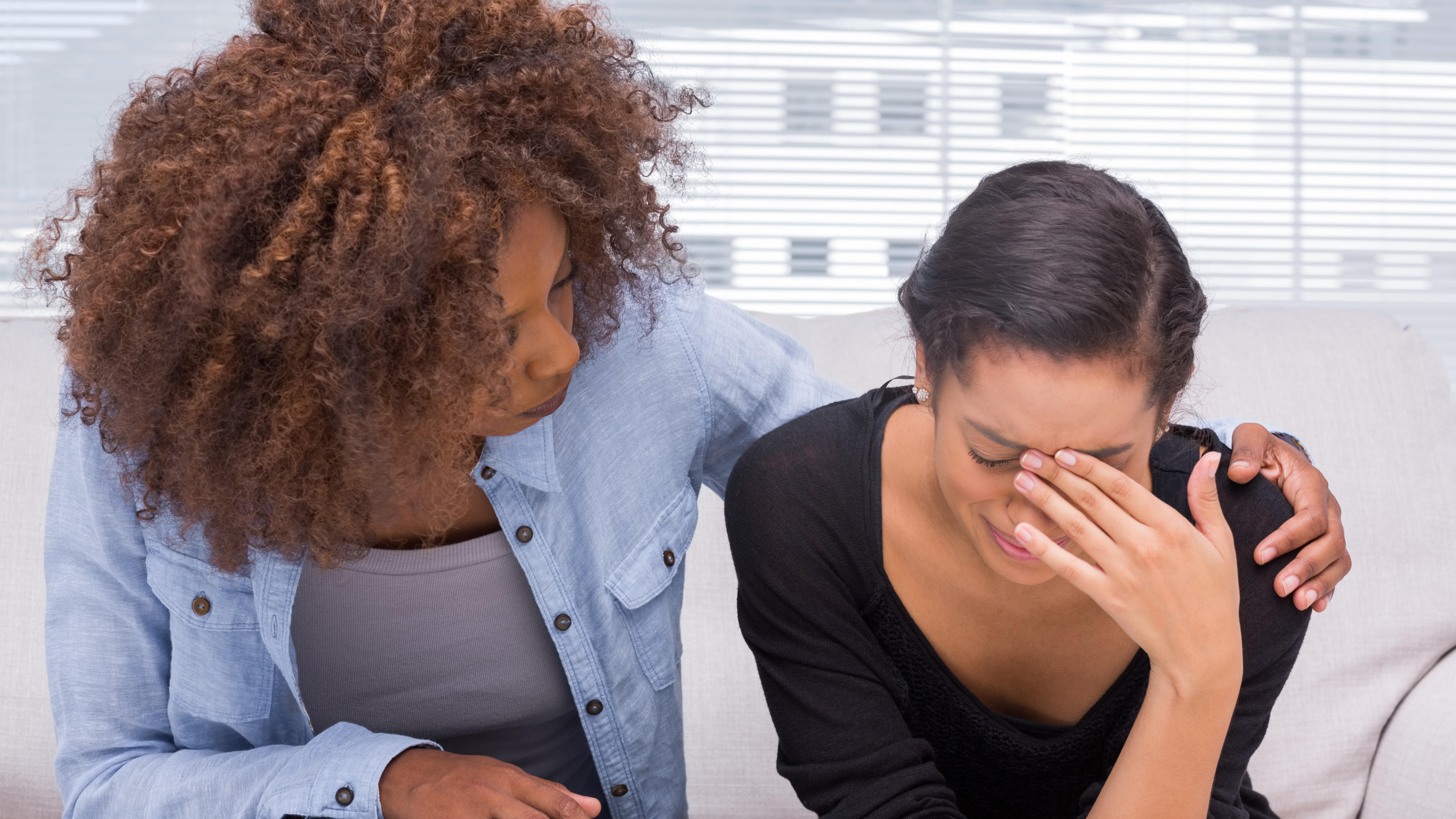 Broaching the topic of mental health with a friend or loved one can be intimidating and difficult to navigate.

Though society has come a long way when it comes to speaking more openly about mental illness, for many a stigma still exists, as does fear in admitting when help is needed.

But the numbers don't lie. In a given year, more than 40 million U.S. adults suffer from some type of mental illness, and depression is the leading cause of disability worldwide

The impact of untreated mental illness is also devastating. More than 10 million adults struggle with a combination of mental health and addiction issues. And suicide is the 10th leading cause of death in the United States, claiming more than 44,000 American lives per year.

It's clear that more people need treatment for these often silent disorders. But how do you talk to someone in need about getting help?

A recently launched campaign called Face the Issue aims to encourage and guide people through those conversations. In a series of videos, there's advice on how to redirect gossip and unhelpful conversations about someone in need to directly addressing the issue head-on.

The campaign also includes helpful information to keep in mind both before and during these conversations.

How to tell if something's wrong

Peter Whybrow, M.D., chair of the department of Psychiatry and Biobehavioral Sciences at UCLA and an advisor to the Face the Issue campaign, notes that while every person's experience with mental illness is different, there are some common signs.

"Most of us are engaged in everyday activity with each other so the cardinal thing that we would look for is that that changes from your experience in the past," he told CBS News. "It's not one thing in particular but it's more of an intuition."

For example, if a friend you normally see on the weekends for coffee starts canceling regularly, that may be a first red flag. If someone continually bails out of group activities to spend time alone on the internet, this may be a signal it's time to have a conversation.

"These sorts of shifts, although they may seem insignificant, if they go on for a length of time, then the person probably is beginning to change in terms of the way they feel about themselves and the world around them, so that's the time to begin to engage," Whybrow said.

Mike Myers, M.D., professor of clinical psychiatry at SUNY-Downstate Medical Center in Brooklyn, New York, notes that changes in mental health can manifest in other ways outside of someone's personality, as well.

"It could be in their appearance. They seem to be losing weight or they don't seem to be as interested in grooming as they once were," he said.

Myers, who was not involved in the Face the Issue campaign, said that it's important to trust your gut.

"Trust your instincts. If you're concerned about somebody you care about and you know pretty well and they just seem different, don't dismiss it."

How to approach the conversation

If you're at the point where you have concerns about a friend or loved one's mental health, it's time to talk with them about it.

Myers recommends finding a quiet, confidential place where it's just the two of you to talk. He suggests coming into the conversation with a short list of things in your mind you'd like to say to the person.

"Three, four bullet-points of things you've noticed," he said. "That's the best way to approach it, that there's been a change in you and telling the person what you've observed."

Myers said it's helpful to use tentative language. For example, instead of making blanket statements like "you lost too much weight" or "you look terrible," say things like "I don't know if it's me, but I've noticed that you don't seem like yourself lately" or "you seem thinner to me, I don't know if there's been a change in how you're eating." Then ask if they're feeling OK and if there's anything they'd like to talk about.

"The idea here is that hopefully you might get a bit of dialogue going," Myers said.

Things to keep in mind during the conversation

If the person opens up to you, there are several things to keep in mind during the conversation.

The first, experts say, is to try to put yourself in their shoes.

"If you know a person reasonably well, the first step is really to listen to them and then to try to put yourself in their place," Whybrow said. "That's called empathy. It's not sympathy. Sympathy is when you listen to someone and hear they've had a really wretched time and say 'I'm so sorry.'"

A classic example, he says, is when someone experiences a death and others say "I'm so sorry for your loss."

"That's a fairly empty statement if you think about it," Whybrow said. "What you have to do if you're genuinely interested in helping a friend is to put yourself in the place of that individual. Yes, you can be sorry that they lost a loved one but think about how it is to be in their shoes."

As you listen, reflect on your own experiences and perhaps share them with the person you're talking to.

You may also want to ask about things that generally make them feel better, and suggest they do them. Things like getting more exercise, calling a loved one, or avoiding alcohol may be beneficial.

"The most important thing for people when they are feeling down is that they begin to feel lonely and then they withdraw from interaction with others and it gets into a spiral where social interaction will diminish even more," Whybrow said. "Before long, they are really just sitting in their room crying and not answering their phone."

Another thing to keep in mind, Myers said, is to keep your language judgment-free and not push too hard if someone refuses to open up right away. "You run the risk of them completely shutting down," he said. "Even if you are frustrated, don't let your emotions get the best of you. You might say something you'll regret."

If the first conversation does not go as well as you hoped, you can always try again at a later time.

It could also be helpful to suggest that the person speak to their primary care doctor or seek help from a mental health professional.

What to do if conflict arises

Sometimes, especially with a person who may not be in the best mental state, conflict may arise when trying to talk to someone about mental health.

If this happens, experts say it's important to keep your cool.

"You back off and say 'I'm sorry. I didn't mean to distress you, but I do want you to know that I love you and am concerned about you and would like to help if you feel I can do anything to help you.' In other words, you don't engage them combatively because you just lose the whole objective that way," Whybrow said.

If you feel comfortable leaving the conversation there, you can follow up at a later time. However, if your intuition says the person is very ill or might be in danger of harming themselves, suggest professional help and even doing so together.

After an initial conversation with someone about mental health, it can be tricky to know when and how to check in with them again.

One way to handle that, Whybrow said, is during the initial conversation tell them you are going to follow up — and then go through with it. "Too often people say, 'Oh, I'll give you a call,' and they never do. That's the worst thing you can do," he said.

If you notice improvement in the person, he suggests pointing that out and asking if they really are feeling better. Letting them know you are there to help in anyway you can is also important.

"Don't frame it as, 'Oh, it seems your depression has gone away,' because they may be feeling better but it could come back again in five minutes," Whybrow said. "What will help is that they need to engage with other people in their world, to know that others are on their side and together they may be able to find a solution."

If the person appears to be the in the same or worse state, Meyers suggests asking if he or she incorporated any of the strategies that might have been talked about in the initial conversation, such as going to the gym more often, drinking less alcohol, or calling a mental health professional.

Again, letting them know you are there to help in any way you can is important.

If you feel someone is at risk of self-harm or even suicide, it is important to step in.

Tell them you want them to speak to someone right now, Myers said, help them contact a helpline. Also, offer to sit with them and dial it for them.

"It's not enough to give them the 1-800 number and tell them to call later on," Myers said. "The vast majority of people will not do that."

If you're out with someone — especially if alcohol is involved — and you believe they are in danger of suicide, Myers recommends walking them to a local emergency room.

"For some people that may seem pretty drastic, but if you've got a pretty strong indication of that, they really do need to be seen immediately," he said.