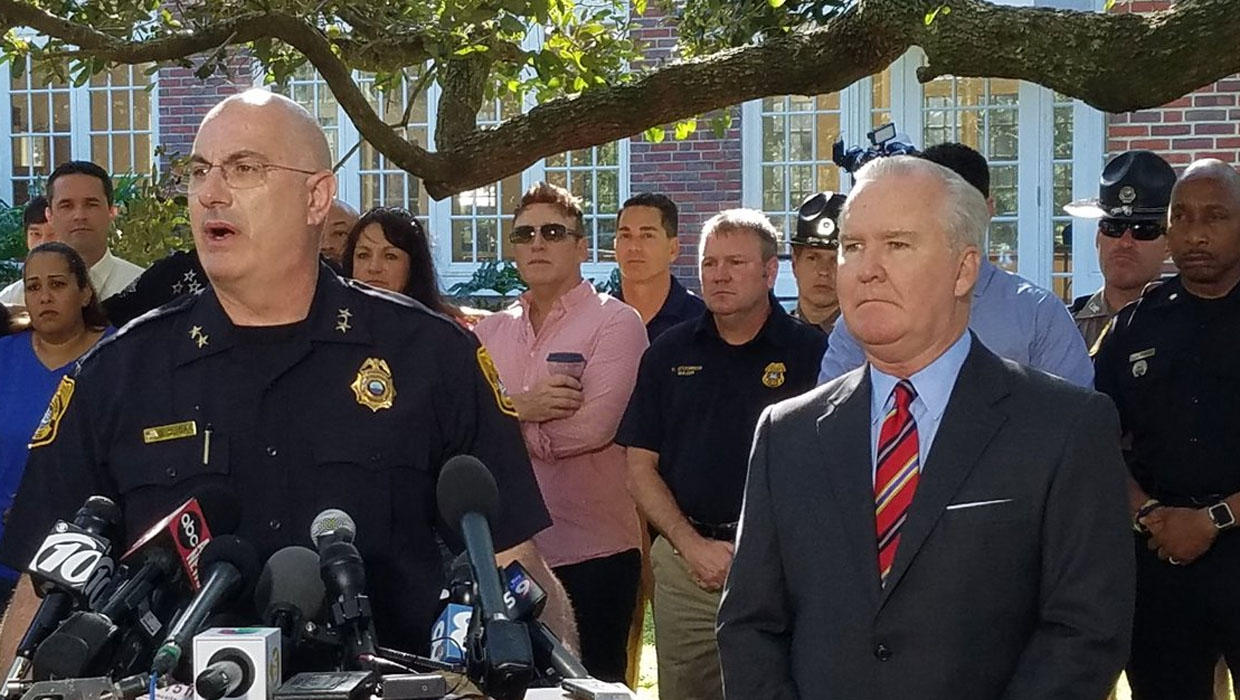 TAMPA -- The gun that a Tampa serial killing suspect passed to a co-worker at a McDonald's Tuesday, leading to his arrest, was the same gun used in all four murders, Tampa police announced Wednesday.

The tip about the gun was "what we needed," said Tampa police chief Brian Dugan, the crucial clue that definitively linked the four slayings that have terrorized the city for weeks. Dugan said the weapon provided the probable cause to arrest  24-year-old Howell Emanuel Donaldson III and charge him early Wednesday with four counts of first-degree, pre-meditated murder.

"For 51 days, we've had a neighborhood held hostage…dealing with a serial killer," said mayor Bob Buckhorn. "Today, the light shines. The darkness is over. This community begins the healing process."

Dugan said Donaldson admitted owning the gun, but did not confess to the four seemingly random killings of Benjamin Edward Mitchell, Monica Caridad Hoffa, Anthony Naiboa and Ronald Felton. Buckhorn said if Donaldson is found guilty in the slayings, "he should die."

Dugan said he was "frustrated" that he doesn't yet know what motivated the shootings.

"He was cooperative, but he did not tell us why he was doing this," Dugan said. "There have been many frustrating things during this whole process – we were really hoping to find out what was driving him to do this. We don't have those answers yet."

Dugan said he is confident Donaldson is the perpetrator of all four killings in the Seminole Heights neighborhood. Mitchell, 22, became the first victim on Oct. 9. Two days after Mitchell was shot, Hoffa, 32, was gunned down. On Oct. 19, Naiboa, 20, was shot after taking the wrong bus home from his new job.

All of the October victims were either getting on or off a city bus, or were at a bus stop when they were shot, police said. Police found the body of Felton, 60, in the street on Nov. 14. Police said Felton had been walking across the street to meet someone when the gunman came up behind him and fired.

Police had increased patrols in the neighborhood, investigated more than 5,000 tips and released surveillance videos of a hooded suspect, but the break in the case came Tuesday afternoon, when Dugan said Donaldson walked in to the Ybor City McDonald's where he worked and handed his co-worker a bag for "safekeeping" while he went to a nearby business to get a payday loan, according to an arrest report.

The co-worker opened the bag, saw the loaded semi-automatic gun and notified her manager, who told an officer who was in the McDonald's doing paperwork. The officer took the gun and she notified the police operations center, Dugan said. Officers made contact with Donaldson when he returned to the restaurant just after 2:30 p.m., Dugan said.

Dugan said he didn't believe Donaldson was trying to turn himself in when he passed the gun to the co-worker to hold, and it's possible he didn't think she would open the bag.

"The person who called us, I cannot thank them enough for standing up and doing the right thing and saying, 'This doesn't seem right, why does this person have a gun in a bag?'" Dugan said.

Dugan said Donaldson admitted to legally purchasing the gun several days before Mitchell was slain. He said investigators conducted a lengthy interview with him, and that he appeared "pretty laid back" with a relaxed demeanor when he was arrested.

"We're not sure why he was in this neighborhood," he said. "We're not aware what he ties are and we don't know what his motive is. But there is a lot more to go."

Dugan said investigators recovered a jacket and hoodie in Donaldson's car that appeared to match those worn by the suspect seen in publicly released surveillance video taken on the night of the first shooting. He said it's not yet clear that they are the same garments, but implied they were, saying, "if it walks like a duck."

Authorities said a search of Donaldson's cellphone found location data that indicated three days of recorded times and activities corresponding with the first three shootings on Oct. 9, Oct. 11 and Oct. 19.

CBS News correspondent Manuel Bojorquez reports that Donaldson is from the Tampa area, but also has connections to New York. The New York Police Department confirmed overnight that he was arrested in Manhattan in 2014, but they wouldn't say for what.

Donaldson graduated from St. Johns University in New York in January 2017, according to school spokesman Brian Browne. He was a walk-on for the men's basketball team during the 2011-12 season, but never played in a game, Browne said.

Donaldson told investigators he was unfamiliar with the neighborhood where the shootings occurred. He then asked for an attorney, but arrest records don't list one. The chief said he didn't know if he had a lawyer yet.

Describing how he felt about Donaldson's arrest, Dugan said he had gotten about two hours of sleep, was "numb" and his mind was spinning.

"We've had tips before, so this morning I think is when it hit me, we actually got this guy," Dugan said. "It's a feeling of relief. It's a heavy burden to start off as a chief of police and have four unsolved homicides on your watch – that's a tough pill to swallow and something I will carry with me for the rest of my life."

Dugan praised the work of the city's "damn good cops," and fellow law enforcement and the community who "rallied" around him.

"It's times like this when it's easy to divide a city, a police department, and nobody allowed that to happen – we stuck together," Dugan said.

Several of the victim's family members also spoke at the press conference Wednesday, praising the work of law enforcement. Monica Hoffa's uncle, Robert Hoffa, said Tampa would "shine on" and wouldn't allow the victims to die in vain.

"I'm sure we have a lot of people in this community that will be able to sleep now," Hoffa said.