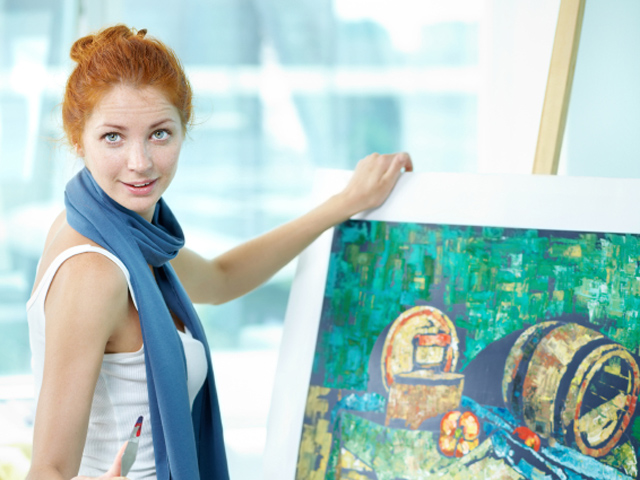 (MoneyWatch) In a New York Times Motherlode guest blog post recently, PR executive Dan Fleshler posed a question. His nearly grown up daughter wanted to make documentaries. She showed some talent. But making movies -- of the change-the-world variety -- isn't exactly an easy career in which to make a living. Fleshler himself had wanted to be a novelist but wound up doing PR. So what should he tell her?

I've been pondering this question myself recently. My kids are much younger, but part of parenting is wondering what your children's futures will look like. When they're little, "I want to be an artist" is a perfectly fine answer to the question of what you want to be when you grow up. When you're 21, such an answer can start to make your parents antsy. They wonder: Will my kid become the next Damien Hirst? Since that seems unlikely, the other side of the coin is that the child will wind up living in the basement forever.

But I think such all-or-nothing thinking stems from the fact that most people aren't too familiar with the breadth of creative careers. I know several writers -- including some writing novels -- who earn into the 6-figures each year. They simply have a practical approach to their work. If your kid wants to pursue a profession usually proceeded by the adjective "starving," here's some solid career advice to dish out:

1. Learn how to network. Everyone needs to learn networking skills, but people in uncertain career paths need this skill even more. Encourage your kid to interview several people in his or her potential profession -- partly to learn what it's like, but also to start learning who's who.

2. Build a portfolio. In creative careers, more so than others, your resume consists of what you've done. If your son wants to be a choreographer, there need to be several YouTube clips of dances he's choreographed and that dancers have performed. A composer needs to compose things and get choirs or orchestras to perform them. Yes, this involves being entrepreneurial (like bribing your fellow music majors to perform your work) but guess what? So does an artistic career.

3. Find the right day job. Sometimes people in creative careers need a gig to put food on the table for a few years. But there are ways to do this badly, and ways to do it well. The best day jobs both pay the bills in minimal time, and put you on the hunting path toward your desired career. If you want to make documentaries, you could work 40 hours a week at a small non-profit or you could start a business making high-end wedding documentaries at $7,000 a pop for 10 weekends a year (and a few hours doing production during the week). That job that would leave you free to travel for your work much of the rest of the time.

4. Be happy with loving 50-75 percent of your work. Even people who achieve great success wind up doing some side projects that are more about cash flow than artistic merit. Novelists write magazine articles to pay the bills in between advances. Working painters don't love all their commissions, and choral composers learn that every key change in a show stopper will sell another thousand copies. You do some of that, and do some of the awesome stuff too. That's the price you pay for having a career that sounds cool at cocktail parties -- and that you actually did want to be when you grew up.

What would you tell a kid who wanted to be an artist?

Can I leave a job off my resume?
View CBS News In
CBS News App Open
Chrome Safari Continue
Be the first to know
Get browser notifications for breaking news, live events, and exclusive reporting.