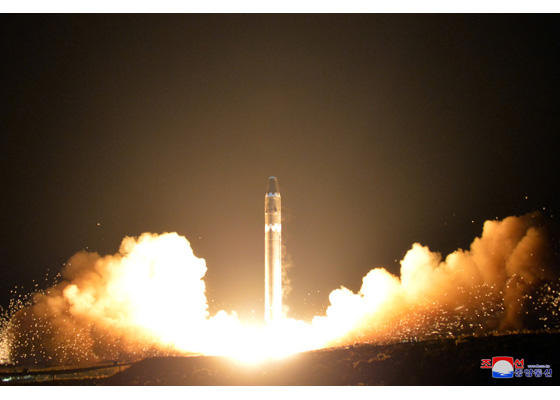 TOKYO -- North Korea released dozens of photos Thursday of the Hwasong-15, a new intercontinental ballistic missile it claims can reach any target in the continental United States. The photo dump, published in the paper and online editions of the ruling party's official daily, is a gold mine for rocket experts trying to parse reality from bluster.

Their general conclusion is that it's bigger, more advanced and comes with a domestically made mobile launcher that will make it harder than ever to preemptively destroy. But there's a potentially major catch: it might not have the power to go much farther than the West Coast if it is loaded down with a real nuclear warhead, not a dummy like the one it carried in its test launch on Wednesday.

"I think it's clear from the pictures that it's a more capable rocket than, certainly than the last one we saw," David Wright of the Union of Concerned Scientists told "CBS This Morning."

The North's new missile appears to be significantly bigger than the Hwasong-14 ICBM it tested twice in July. Note how it dwarfs North Korean leader Kim Jong Un, who stands about 5 feet 7 inches tall. In a tweet just after the photos were published, Michael Duitsman, a researcher at the Center for Nonproliferation Studies in Monterey, California, said: "This is very big missile ... And I don't mean 'Big for North Korea.' Only a few countries can produce missiles of this size, and North Korea just joined the club."

Size is important because a missile targeting the U.S. would have to carry a lot of fuel. Duitsman also suggested the new ICBM appears to have a different engine arrangement and improved steering.

North Korea boasted repeatedly in its announcement of the launch Wednesday that the Hwasong-15 was fired from a domestically made erector-launcher vehicle. Its photos back that up.

Being able to make its own mobile launch vehicles, called TELs, frees the North from the need to get them from other countries, like China, which is crucial considering the tightening of international sanctions that North Korea faces. TELs make it easier to move missiles around and launch them from remote, hard-to-predict locations. That makes finding and destroying the Hwasong-15 before a launch more difficult.

North Korea claims the Hwasong-15 can carry a "super-heavy" nuclear payload to any target in the mainland United States. The re-entry vehicle, that nose cone in the photo, does indeed look quite large. But the heavier the load the shorter the range. Michael Elleman, a leading missile expert, has suggested in the respected 38 North blog that Hwasong-15's estimated 8,100-mile range assumes a payload of around 330 pounds, which is probably much lighter than any real nuclear payload the North can produce.

To get to the West Coast, the North needs to keep that weight down to 1,100 pounds. Whether it can do that remains questionable. "Kim Jong Un's nuclear bomb must weigh less than 350 kilograms (800 pounds) if he expects to strike the western edges of the U.S. mainland," Elleman estimated. "A 600-kilogram (1,300-pound) payload barely reaches Seattle."