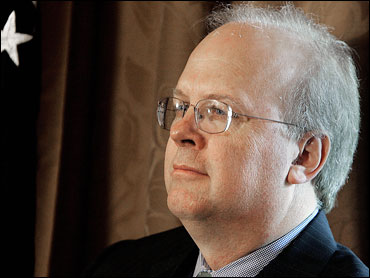 Karl Rove was introduced by RNC co-chair JoAnn Davidson at their lunch on Friday as a man who his friends call charming, brilliant and funny. And, for now, she could have added happily, unindicted.

I have seen Rove speak to a number of audiences over the years and he is consistently confident, clear and chock full of historical allusions. In February 2005, he gave the keynote speech to the Conservative Political Action Committee meeting and stressed the great gains the Republicans have made over the past 40 years and the need not to grow timid or tired lest those gains be wiped out.

"Conservatism is the dominant political creed in America," Rove said, and emphasized the Bush administration's commitment to "reforming and modernizing" Social Security, health care, public education and the tax code.

"Those who oppose this agenda are in a difficult position. They're attempting to block reforms to systems that almost every serious-minded person concedes need reform. ... That's not a good place to be in American politics."

This year's laundry list of issues was similar to last year's – tax cuts, tax cuts and tax cuts; conservative judicial philosophy; and terrorism. But in February 2005, Social Security was front and center along with health care and education.

Democrats surprised themselves, as well as Rove, by blocking the Rovian "reform" of Social Security and they now think they have another winner: the Medicare prescription drug program. Seniors who have become a targeted swing voting group are confused about the benefit and conservatives are yelling about the cost.

One Democratic candidate who has been focused like a laser on this issue is the junior senator from New York. While the Democratic base is yearning for her to weigh into the debates over Iraq and domestic spying, and the national media is obsessed with her trash talk about Bush and the Republican Congress, Hillary Clinton is talking health care and drugs. Just look at the past week of press releases:

Jan. 24: Clinton and Dingell Announce Legislation to Rescind Republican Give Away to Insurance Companies.

Democratic pollster Geoff Garin says there is "mounting evidence that seniors believe something went awry" with the program and that there is some "compelling evidence" that Republicans wrote a bill for the drug companies. Garin says that this is just one of several issues which he believes will illustrate the "problem of one-party government and the need for checks and balances."

Democratic officials say finding issues like drugs and gas prices to illustrate how the Republicans scandals have impacted voters' lives is crucial to create the big wave they need to take back Congress in 2006. Garin says that a narrative of incompetence will also help create that wave. "How they handled New Orleans, the lack of a plan for the war in Iraq, no body armor for the troops and now the screwed up drug benefit" can be used as reasons why Republican power needs to be checked.

Clinton on Tuesday used a phrase that is right out of the Democratic playbook. In a conference call with Democratic Rep John Dingell, she accused the Republican Congress of a "stealthy attack in the dead of night" with no Democrats in sight "to take care of a special interest (the insurance industry) at the expense of the American people."

Clinton has tried and failed on the issue of health care before. In 2004, John Kerry tried over and over to switch the topic from terrorism and Iraq to health care. But he was never able to gain traction on it despite the fact that the polls show it is an issue that hits home with voters.

But in 2006, many Democrats think it's a perfect vehicle to give voters a reason to "throw the bums out." This year, they think they have an opening to play their own hand rather than Karl Rove's. Recent history is on Rove's side but, as he warned the Republicans on Friday, "nothing in politics is foreordained."