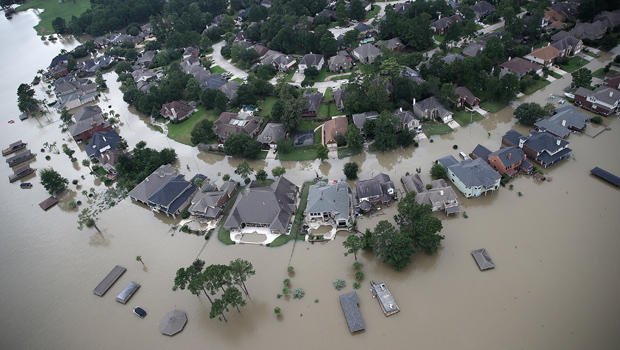 Just two years ago Charleston had flooding that could have been called a one-in-a-thousand-year event. Now with Irma approaching, and the potential for another massive flooding event, it begs the question of whether we need to re-think whether these really are once-in-a-lifetime events, reports CBS News correspondent Kris Van Cleave.

The flooding Hurricane Harvey left behind in Houston was both deadly and devastating. Entire neighborhoods became submerged after rainfall totals exceeded "500-year" levels, but as it turns out these flooding events are not quite so rare.

This was the third storm in just three years to bring so-called "500-year" rain to the city.

"Clearly we're seeing extreme events. Who would have imagined 52 inches in Houston. It's just unimaginable," said Sandra Knight of the University of Maryland Center for Disaster Resilience.

The "500 year" term is a risk assessment tool used for flood insurance, but scientists say the phrase is misleading. It actually does not mean that the event happens only once every 500 years, but instead that there is a one in 500 chance that this amount of flooding will occur in a single year. A 100-year event has a one in 100 chance of occurring. Researchers say these large storms are happening more often.

"As the climate continues to warm, rare events could even become the norm," said Michael Wehner. He studies the behavior of extreme weather events. He says global temperatures have increased a full degree centigrade in the past century and those warmer conditions can create more powerful storms.

And more water in the air means more rain that can fall in flood zones where populations are growing.

"Look, in a place like Miami or Houston. And in the past decades we've had an incredible development as we're planning and looking forward, we have to make room for where this water is going to go," Knight said.