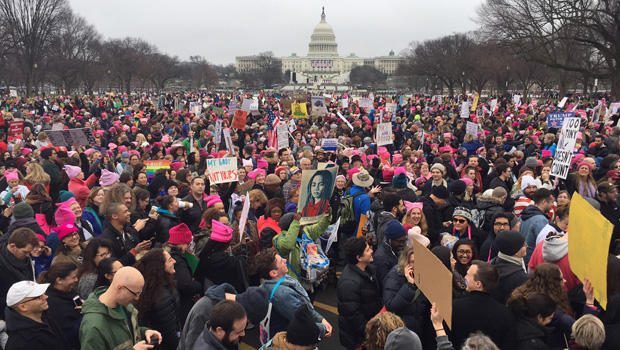 THE NEXT CHAPTER in American history is playing out before our eyes. It began Friday on the Capitol steps with the inauguration of President Trump, and it continued yesterday on the streets of Washington and other cities around the country and the world. Rita Braver reports on one part of our Cover Story:

Madonna’s mini-concert may have been a surprise. But so was the turnout for this event.

And they seemed to come from everywhere: Louisville, Hartford, Conn., Detroit, Northern California, Lake George, Colo.  One man said, “I’m from Ohio, and I’m here because I have a lot of women in my life that I love.”

And their reasons for being here had a common theme:

One woman said, “I’m here for women’s rights and because I have a daughter and I’m looking out for her future.”

Another said, “I want to show America that love still trumps hate.”

“It’s time to speak out on why we are all so, so alarmed by our new president,” said another.

And though this was not called an anti-Trump march, there was a point to the sea of pink hats.

“What do you think is the reason for them?” she was asked.

“It’s because of what Donald Trump said about grabbing women without their consent. Which is not OK.”

And up on the stage, were speakers like veteran women’s rights activist Gloria Steinem, an honorary March Co-Chair (“You look great! I wish you could see yourselves. It’s like an ocean”).

Steinem got right to the political point: “Trump and his handlers have found a fox for every chicken coup, and a Twitter finger must not become a trigger finger.”

The event was called in part because of concern among women about the possible erosion of rights they have spent generations working to achieve.

Cecile Richards, the president of Planned Parenthood, told the crowd, “One of us can be dismissed. Two of us can be ignored. But together, we’re a movement.”

The speeches went on for more than three hours, featuring everyone from California’s first minority woman Senator Kamal Harris (“There’s nothing more powerful and we cannot be dismissed. It’s going to get harder before it gets easier, and we will keep fighting no matter what because we have the power”), to wounded veteran, now U.S. Senator from Illinois, Tammy Duckworth (“I did not give up literally parts of my body so that we can give up our rights”), to event co-chair Linda Mansour (“I am unapologetically Muslim American. I am unapologetically Palestinian-American”), to six-year-old Sophie Cruz, the daughter of undocumented immigrants (“Let us fight with love, faith and courage so our families will not be destroyed”).

But it was not just in Washington. There were “sister marches” in scores of cities around the world, with speakers calling for mass movement that will protect women’s rights, and elect officials who will help.

But can one day of marches make a major difference?

“The marches of the sixties on civil rights led to the Civil Rights Act and the Voting Rights Act,” said University of Connecticut political science professor Paul Herrnson, who studies mass movements. “The marches and protests on Vietnam also had an impact.  Lyndon Johnson decided not to seek his party’s presidential nomination for another term as a result of those marches.”

But Herrnson says there is another key ingredient: The follow-up.

“You know, American politics is really about sustained interest and sustained pressure.  It’s about organizing.  It’s about making sure that, over time, policymakers hear what you have to say and get the sense that you are determined.”

Speakers today vowed that this was only the beginning, and though it was the stars that stole much of the spotlight, like Alicia Keys (“This girl is on fire!”), it will be the rank-and-file who determine whether this is a one-day flash-in-the-pan  … a day that included a chance for marchers to jeer at President Trump’s motorcade as it sped into the White House.

At the very least, for those who put their shoe leather and their hearts into the event, it will be a day that made history.

A war of words on college campuses