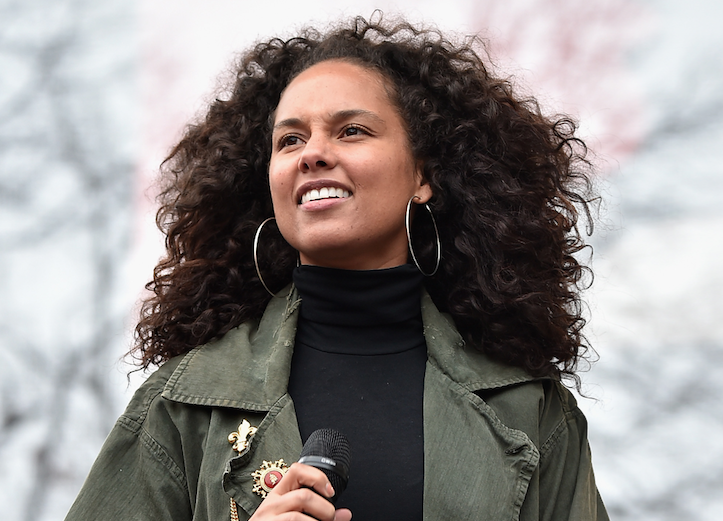 A poem recited by Alicia Keys, a simple request from Scarlett Johansson and a stage showered with shredded newspaper thanks to Michael Moore — these were all moments that caused Women’s March on Washington attendees to explode with loud cheers.

Hundreds of thousands of protesters watched speakers and performers’ passionate pleas, speeches and song on Saturday— so many speakers, in fact, that the march was delayed by nearly two hours.

But marchers didn’t seem to mind.

Here’s a look at several moments from the speeches that went viral:

America Ferrera, a vocal Hillary Clinton supporter in the 2016 election, led the charge early Saturday as she stepped on stage to express her hopes and fears, a day after President Donald Trump was sworn in.

The actress then explained why she felt women should march in protest of President Trump.

“We march today for the moral core of this nation, against which our new president is waging a war,” Ferrera told the Washington crowd. “Our dignity, our character, our rights have all been under attack and a platform of hate and division assumed power yesterday. But the president is not America. ... We are America and we are here to stay.”

Gloria Steinem pulled out a piece of paper as she stepped to the podium, kicking off her speech with sharp criticism of President Trump.

“To paraphrase a famous quote, I just want to say, ‘I have met the people and you are not them,’” said Steinem, directing her message to the president. “We are the people.”

“I was just talking to people from our many sister marches, including the one in Berlin, and they asked me to send a special message: We in Berlin know that walls don’t work,” said Steinem, mocking Mr. Trump’s promise to build a wall along the southern border with Mexico.

“Who wants to be in my next movie here?” Michael Moore joked as he walked on stage to cheers.

The filmmaker pulled out a copy of Saturday’s Washington Post, pointing at a headline that read, “Trump takes power.” “I don’t think so,” Moore shouted. “Here’s the power! Here’s the majority of America right here. We are the majority.”

Shortly after, Moore ripped a copy of the paper on stage, joking, “I’ll pick it up later.”

Admitting he couldn’t follow Gloria Steinem, Moore said he didn’t want to give the traditional speech and quickly got to the point.

On Monday, Moore said, call your senators and tell them, “We do not accept Betsy DeVos as our secretary of education.”

Planned Parenthood President Cecile Richards on keeping up the “fight”:

Dressed in vibrant magenta, Cecile Richards, president of Planned Parenthood, thanked everyone at the Women’s March on Washington for continuing to “fight.”

“Today, we’re here to deliver a message — we’re not going to take this lying down,” Richards exclaimed. “For the majority of people in this country, Planned Parenthood is not the problem — we’re the solution.”

Richards then mirrored a message spread by Hillary Clinton, who she called her “heroine”: “Reproductive rights are human rights.”

A bundled-up Scarlett Johansson also read from a piece of paper as she delivered a speech to thousands of people at the nation’s capital.

Unlike those before her, Johansson had a simple plea for the new president: “Support me.”

“I respect that you are our president-elect,” Johansson began. “And I want to be able to support you. But first, I ask, that you support me. Support my sister. Support my mother. Support my best friend and all of our girlfriends. Support the men and women here today that are anxiously awaiting to see how your next moves may drastically affect their lives.”

“Are you ready to march?” Alicia Keys asked an enthusiastic crowd as she strutted along the stage in Washington, D.C. on Saturday.

The singer pulled out a scrunched up piece of paper and began to passionately read — with long pauses — Maya Angelou’s famous poem, “Still I Rise.”

When finishing the poem, Keys addressed women in the crowd, “We will not allow our bodies to be owned and controlled by men in government or any men anywhere for that matter.”

The crowd cheered. Slowly, motioning the audience to sing along, Keys then sang her popular song, “Girl on Fire” — but this time, it wasn’t just about one girl, but girls, plural.

“These girls are on fire,” Keys ad-libbed, as the crowd went wild.

Madonna says she has “thought an awful lot about blowing up the White House”:

Madonna was one of the final artists to speak at the Women’s March in Washington, D.C., and left after a quote that may yet land her in hot water.

Wearing bright orange, baggy pants and a black hat with pointy ears, Madonna said:  “I’m angry,” Madonna stated, pointing to her chest. “Yes, I am outraged. Yes, I have thought an awful lot about blowing up the White House.”

The singer then cursed several times on stage. In fact, the phrase “F-bombs” soon began to trend on Twitter, as people counted hearing at least three throughout her speech.

After closing her speech, the pop star performed two hit songs, “Express Yourself” and “Human Nature.” During breaks in the songs, the singer continued to use vulgar remarks about the president.