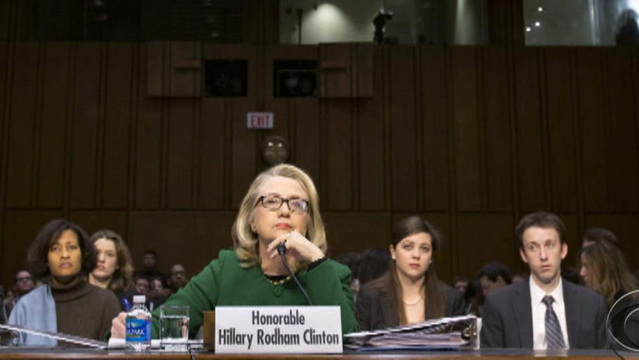 In a much-anticipated interview, former Secretary of State Hillary Clinton will testify before the House Select Committee on Benghazi on Thursday, marking her third appearance before a Congressional panel addressing the 2012 terrorist attacks.

The Republican-led panel has itself been dogged by criticisms of partisanship in recent weeks, since House Majority Leader Kevin McCarthy, R-California, suggested Clinton's dipping presidential poll numbers could be attributed to the Benghazi investigation. But the Democratic presidential candidate, in her opening statements, will largely ignore the political bickering surrounding the panel. Instead, she'll focus on her vision of American diplomacy and the lessons the United States can learn from the attacks on the diplomatic compound in Libya.

According to a summary of her introductory remarks provided by a Clinton aide to CBS News, Clinton's goal in appearing before the panel will be to honor the memory of U.S. Ambassador to Libya Chris Stevens and the three other Americans killed in 2012. She will call for the country to fortify its protections of diplomats working abroad, rather than withdraw them from their missions if dangerous conditions arise.

In her remarks, the former secretary will also lay out her own vision for American relations abroad, where a diplomatic ground presence will be at the core.

Clinton will highlight the need for the United States to take a lead when it comes to foreign policy and diplomacy, emphasizing the importance of going forward with diplomatic expeditions where the U.S. does not have a military presence.

While her opening statements present a measured front, the real test for the former secretary will come with the panel's barrage of questions. During Clinton's last appearance on Capitol Hill in early 2013, she became visibly frustrated by the Congressional grilling. At one point she told the Senate Foreign Relations committee, vehemently, "We had four dead Americans. Was it because of a protest or because of guys out for a walk one night and decided to go kill some Americans? At this point, what difference does it make, senator?"

Questioning by the committee's 12 members could last throughout the day and is expected to span topics from Clinton's role in the security plans for the diplomatic compound in Benghazi to the use of the secretary's private email address and server.