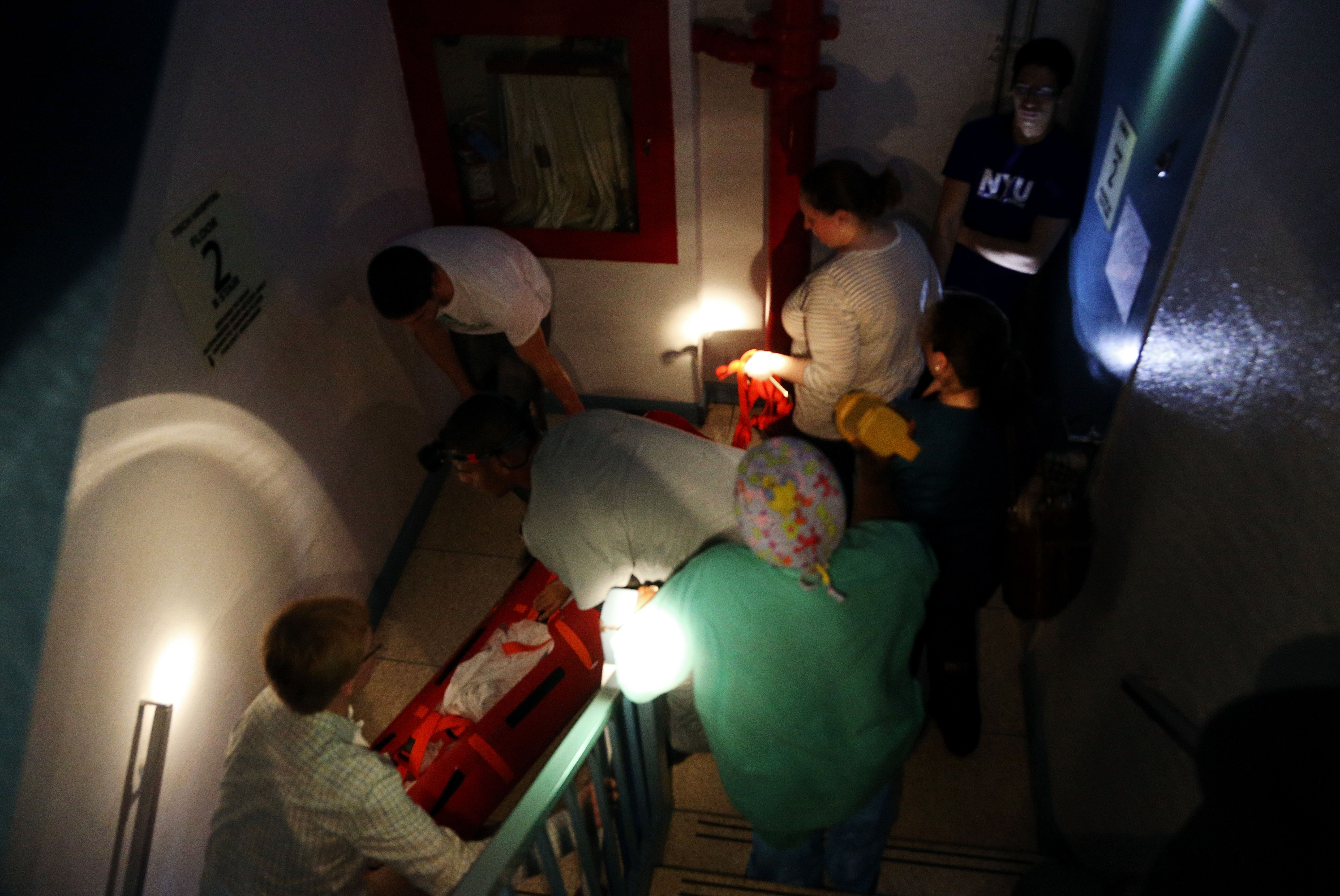 NEW YORK There are few places in the U.S. where hospitals have put as much thought and money into disaster planning as New York. And yet two of the city's busiest medical centers failed a fundamental test of readiness during superstorm Sandy this week: They lost power.

Their backup generators failed, or proved inadequate, and nearly 1,000 patients had to be evacuated.

The closures led to dramatic scenes of doctors carrying patients down dark stairwells, nurses operating respirators by hand, and a bucket brigade of National Guard troops hauling fuel to rooftop generators in a vain attempt to keep the electricity on.

Both hospitals, NYU Langone Medical Center and Bellevue Hospital Center, were still trying to figure out exactly what led to the power failures Thursday, but the culprit appeared to be the most common type of flood damage there is: water in the basement.

While both hospitals put their generators on high floors where they could be protected in a flood, other critical components of the backup power system, such as fuel pumps and tanks, remained in basements just a block from the East River.

Both hospitals had fortified that equipment against floods within the past few years, but the water - which rushed with tremendous force - found a way in.

"This reveals to me that we have to be much more imaginative and detail-oriented in our planning to make sure hospitals are as resilient as they need to be," said Irwin Redlener, director of the National Center for Disaster Preparedness at Columbia University's Mailman School of Public Health in New York City.

The problem of unreliable backup electricity at hospitals is nothing new.

Over the first six months of the year, 23 percent of the hospitals inspected by the Joint Commission, a health care facility accreditation group, were found to be out of compliance with standards for backup power and lighting, according to a spokesman.

Power failures crippled New Orleans hospitals after Hurricane Katrina. The backup generator failed at a hospital in Stafford Springs, Conn., after the remnants of Hurricane Irene blew through the state in 2011. Hospitals in Houston were crippled when Tropical Storm Allison flooded their basements and knocked out electrical equipment in 2001.

When the Northeast was hit with a crippling blackout in 2003, the backup power at several of New York City's hospitals failed or performed poorly with generators malfunctioning or overheating. Fuel also ran out too quickly. Even where the backup systems worked, they provided electricity to only some parts of the hospital and left others in the dark.

It still isn't clear whether water breached those defenses, but when an estimated 17 million gallons of water rushed through loading docks and into the hospital's 1-million-square-foot basement, the fuel feed to the generators stopped working. The floodwaters also knocked out the hospital's elevators.

For two days, National Guardsmen carried fuel to the generators, but conditions inside the hospital for patients and staff deteriorated anyway. The generators were designed to supply only 30 percent of the usual electrical load at the hospital, leaving a lot of equipment and labs hobbled. The hospital also lost all water pressure on Tuesday.

By Wednesday morning, Mayor Michael Bloomberg's office learned that Bellevue needed to evacuate. Hospital officials initially thought the facility could survive on generator power with the National Guard's help. However, once they entered a flooded basement -- containing 17 million gallons of water -- officials realized that there was more damage, the mayor said.

In total, more than 700 patients were evacuated from Bellevue by Thursday afternoon, the HHC said in an emailed statement.

"The precautions we had taken to date had served us well," Aviles said. "But Mother Nature can always up the stakes."

NYU Langone Medical Center had also tried to armor itself against floods.

All seven of the generators providing backup power to the parts of the hospital involved in patient care are only a few years old and are on higher floors. The fuel tank is in a watertight vault. New fuel pumps were installed just this year in a pump house upgraded to withstand a high flood, said the hospital's vice president of facilities operation, Richard Cohen.

"The medical center invested quite a bit of money to upgrade the facility," he said.

The pump house remained "bone dry," Cohen said. But water shoved aside plastic and plywood defenses and infiltrated the fuel vault, where sensors detected the potentially damaging liquid and shut the generators down. "The force of the surge that came in was unbelievable. It dislodged our additional protection and caused a breach of the vault as well," Cohen said.

A member of the NYU response team had initially told CBS News Medical Correspondent Dr. Jon LaPook on Oct 29 that water flooding over the FDR Drive had taken out not only the backup generator but the backup to the backup generator. When LaPook arrived on the scene Monday night, there was still some power left in the generator and some lights still worked.

Three hundred patients had to be evacuated in a flash.

Dr. Robert Berg, an obstetrician, said that when he lost power in his apartment, he went to the hospital to charge his cellphone and was stunned to find it in chaos.

"It didn't really occur to me that the hospital was going to be in trouble," he said. Even after finding the lobby dark, "I thought, 'We'll have power upstairs. We're an operating room.'"

He wound up carrying two patients down flights of stairs on a "med sled."

"There was a Category 1 outside and a Category 4 inside," he said. "I can't say that they were very well prepared for it."

That has left only one hospital, Beth Israel Medical Center, functioning in the southern third of Manhattan. It is also on backup power, but brought in two huge new generators Thursday, just in case.

Aviles said Bellevue might be out of commission for at least two more weeks. NYU Langone's generators are operating again, but the hospital is waiting for Consolidated Edison to restore its power before it starts taking patients again, which could happen in a matter of days.

"It's a tremendous facility, with a lot of hardening built into it," Cohen said.

Guice turned himself in to authorities and was released on $10,000 bond, the sheriff's office said.