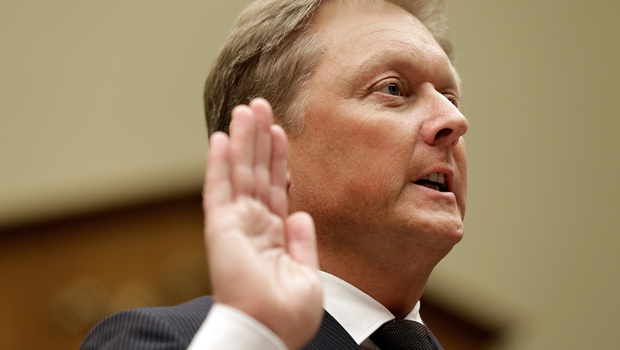 WASHINGTON The Energy Department did not realize for four months that troubled automaker Fisker Automotive Inc. had missed a crucial production target that was required as part of a half-billion dollar government loan, documents released Wednesday show. The mistake allowed Fisker to obtain an additional $32 million in government funding before the loan was suspended in June 2011.

The Obama administration did not make the suspension of the $529 million loan public until early last year, nearly eight months after it stopped making payments to Fisker and long after the Energy Department first warned that Fisker was not meeting milestones to protect taxpayers.

The administration's actions - or failure to act - came under sharp criticism from Republicans Wednesday at a hearing before the House Oversight and Government Reform Committee. GOP lawmakers accused the Obama administration of negligence and worse while Democrats dismissed the hearing as a "show trial" intended to embarrass the president.

But Rep. Jim Jordan, chairman of the Oversight subcommittee on economic growth and regulation, said it was hard to understand why the Energy Department ever thought Fisker was a viable company that should receive taxpayer money.

"The Obama administration owes the American taxpayer an explanation as to why this bad loan was made in the first place, and what they are going to do to minimize the loss that taxpayers face," said Jordan, R-Ohio.

Jordan called the loan program "one of the most disastrously mismanaged and corrupt programs in U.S. history," a claim committee Democrats scoffed at.

Rep. Matt Cartwright, D-Pa., said the $192 million received by Fisker before the loan was suspended represents just 2 percent of an $8 billion loan program to boost electric cars and other advanced vehicles.

Even if Fisker goes bankrupt, as many expect, the loan program is on track to recoup 98 percent of its investment, Cartwright said.

"In the world outside the Beltway, anybody who exceeds expectations 98 percent of the time gets an A-plus, Cartwright said.

"Only in Washington would a $200 million loss be viewed as a success," Jordan shot back.

The oversight panel is looking into the federal loan to the troubled carmaker, which has laid off three-fourths of its workers amid continuing financial and production problems. Fisker has not built a vehicle since last summer and has failed to secure a buyer as its cash reserves have dwindled.

Despite those losses and widespread reports that bankruptcy is imminent, the company's founder and namesake said Wednesday he is proud of its achievements.

Henrik Fisker told the House panel that "cutting edge technology" developed by the Anaheim, Calif.-based company could "pave the way for a new generation of American car manufacturing." Fisker said he is especially proud of the $100,000 Karma hybrid, which Time Magazine called one of the 50 best inventions of 2011.

Fisker has sold fewer than 2,000 Karmas, despite early projections of 11,000 sales per year.

Fisker, who resigned as board chairman in March, disputed claims by some critics that the company needed the federal loan to survive. He said a high-ranking Energy Department official approached him in 2008 and asked him to apply for the loan, which is intended to boost electric cars and other advanced vehicles.

"At that time, we already had significant financial backing from private investors," Fisker said. In all, the company received more than $1 billion in private financing, he said.

Republicans called the claim dubious and noted that Fisker investors include the actor Leonardo DiCaprio and John Doerr, a partner at the venture capital firm Kleiner Perkins who has served on an economic advisory board appointed by President Barack Obama.

Vice President Joe Biden touted the plant in 2009 as a boon to his home state and predicted it would create billions of dollars in jobs.

Fisker told the panel that he chose the Delaware site because the GM plant was in good shape and had access to skilled workers and East Coast ports. As many as 60 percent of the cars the plant was to produce were targeted for export, Fisker said. The choice of Delaware "had nothing to do with the loan" or Biden, Fisker said.

Earlier, the committee released a document showing that the administration was warned as early as 2010 that Fisker was not meeting milestones set up by the government.

An Energy Department official said in a June 2010 email that Fisker's bid to draw on the federal loan may be jeopardized for failure to meet the goals.

Despite that warning, Fisker continued to receive money until June 2011, when the Energy Department halted further funding. The agency did so after Fisker presented new information that called into question whether key milestones - including launch of the Karma hybrid - had been achieved, according to a credit report prepared by the Energy Department.

The December 2011 credit report said "DOE staff asked questions about the delays" in the Karma's launch "and received varied and incomplete explanations," leading to the suspension of the loan.

Aoife McCarthy, a spokeswoman for the Energy Department, said the June 2010 email was taken out of context.

"The document shows that one person at a meeting discussed the possibility that Fisker might not meet a financial commitment" required by the Energy Department, McCarthy said in an email. The department received the needed certification five days later and subsequently made the loan payment, she said.