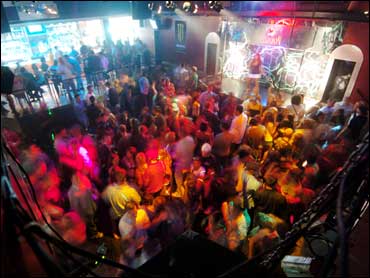 To the disappointment of school administrators — and the pride of some students — West Virginia University is No. 1 on The Princeton's Review's annual list of the top 20 party schools.

The school has made the list seven times in the past 15 years, despite efforts to curb underage drinking and rowdy behavior.

But not since 1997 have the Mountaineers taken the top spot. Last year, WVU was No. 3, bested by the University of Texas at Austin and Penn State, both of which remain in the top 10 this year.

Senior Katie O'Hara, 22, said WVU is No. 1 because "no matter what kind of party you want it's here — bars, fraternities, house parties. ... If you want to take shots all night, there's a bar; no matter what you want to do, it's there."

Still, O'Hara said her friends "know how to manage their time. They know when to party and when not to," which wouldn't explain the school's No. 1 ranking in the category of Their Students (Almost) Never Study.

The rankings are contained in the 2008 edition of "The Best 366 Colleges," which is going on sale Tuesday and is based on a survey of 120,000 college students at those schools, mostly during the 2006-07 school year.

"I think there's no way to measure that," said Sauer, 20, of Richmond, Va. "Every school's a party school."

Incoming WVU President Mike Garrison focused on the positive rather than the rankings, saying the students he met over the weekend and on the first day of classes Monday are more concerned with their futures "and with the great year we have ahead" than with partying.

"I'm focused on the way this university changes people's lives, the research that we do and the service we provide to the state of West Virginia," said Garrison, who officially replaces David C. Hardesty Jr. on Sept. 1. "This is a special place, and the whole state is proud of it."

The Princeton Review says the guide to the best schools is intended to help applicants who can't visit every school in person.

Guide author Robert Franek said each of the 366 schools "is a 'best' when it comes to academics.

"But as anyone visiting colleges can attest, their campus cultures and offerings differ greatly," he said. "It's all about the fit."

At the other end of the partying spectrum is Brigham Young University, claiming the top spot in the "Stone Cold Sober" category for the 10th straight year.

The Princeton Review, which is not affiliated with Princeton University, is a New York company known for test preparation courses, educational services and books. It published its first survey findings in August 1992.