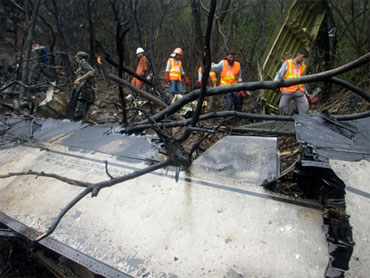 Relatives desperate to find the bodies of their loved ones joined emergency teams battling thick mud, rain and slippery hillsides on Thursday at the scene of Pakistan's worst-ever plane crash.

The Airbus A321 operated by local carrier Airblue crashed into hills overlooking the country's capital, Islamabad, during stormy, monsoon weather, killing all 152 people on board. Wreckage was strewn over about a third of a square mile section of the forested slopes.

The civil aviation authority said the plane had been ordered to take an alternative approach to the runway, but had veered off course. Finding out why will be a key task of the investigation team, said Riazul Haq, director general of the Civil Aviation Authority.

"The fact remains it flew where it should not have done," he said.

Army troops and civilian rescue workers searched a large stretch of the hills scorched by the crash, but the tough conditions slowed the pace of operations. Helicopters could not fly in the heavy rain and low clouds, said a spokesman for the Capital Development Authority, which helps deal with emergencies.

An Associated Press Television News cameraman in the hills saw relatives of passengers working with soldiers and other rescuers at one crash site, where the undercarriage of the jet had come to rest. They had collected several body parts in small bags.

Dozens of relatives and friends of those killed slept outside Islamabad's largest hospital overnight, hoping to receive bodies. They were still there Thursday morning, hugging one another as their tears mixed with the heavy rain, but few corpses were released.

The plane's "black box" flight data recorders have yet to be recovered. Information extracted from them is needed to determine the cause of the crash. Defense Minister Chaudhry Ahmed Mukhtar and other officials have said the government does not suspect terrorism.

The plane was flying from Karachi, the country's commercial capital.

Even when the search is completed, it could take days to identify all the victims with DNA testing since most of the bodies were torn apart and burned in the crash, a grim scene described by rescue workers scouring the twisted metal wreckage.

"There is nothing left, just piles and bundles of flesh. There are just some belongings, like two or three traveling bags, some checkbooks, and I saw a picture of a young boy. Otherwise everything is burned," rescue worker Murtaza Khan said.

The crash was the latest tragedy to jolt a country that has seen thousands of deaths in recent years from al Qaeda and Taliban attacks.

The U.S. Embassy said at least two American citizens were on the plane, an Airbus A321, which was carrying 146 passengers and six crew members.

The Pakistani government declared Thursday a day of mourning for those lost in the crash.

As of Wednesday night, when rescue work was suspended till the morning, 115 bodies had been recovered, federal Information Minister Qamar Zaman Kaira said.

The control tower at Islamabad airport lost contact with the plane as it was trying to land Wednesday morning, said Pervez George, a civil aviation official. Several officials noted the plane seemed to be an unusual distance from the airport, which was some nine miles away.

Raheel Ahmed, a spokesman for the airline, said the plane had no known technical issues, and the pilots did not send any emergency signals. Airbus said it would provide technical assistance to the crash investigators.