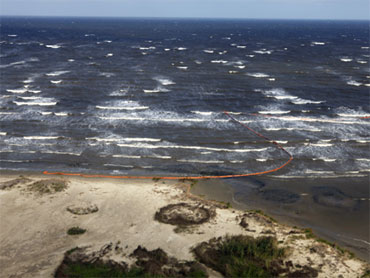 Oil from a massive spill in the Gulf of Mexico oozed into Louisiana's ecologically rich wetlands Friday as storms threatened to frustrate desperate protection efforts. The White House put a hold on any new offshore oil projects until the rig disaster that caused the spill is explained.

Meanwhile, Department of Homeland Security Secretary Janet Napolitano will announce Friday that the oil spill is beyond the capabilities of BP PLC and Transocean Ltd. to handle, meaning a larger government role to stop the leak, a government official told CBS News.

Crews in boats patrolled coastal marshes early Friday looking for areas where the oil has flowed in, the Coast Guard said.

The National Weather Service predicted winds, high tides and waves through Sunday that could push oil deep into the inlets, ponds and lakes that line the boot of southeast Louisiana. Seas of 6 to 7 feet were pushing tides several feet above normal toward the coast, compounded by thunderstorms expected in the area Friday.

Crews are unable to skim oil from the surface or burn it off for the next couple of days because of the weather, Coast Guard Rear Adm. Sally Brice-O'Hara said.

"I want to ensure you the federal government's response was immediate, it has been sustained, and we have adapted as we know more about the spill," Brice-O'Hara told CBS "Early Show" co-anchor Harry Smith. "Our top priority is to get the leak stopped."

Waves may also wash over booms strung out just off shorelines to stop the oil, said Tom McKenzie, a spokesman for U.S. Fish and Wildlife Service, which is hoping booms will keep oil off the Chandeleur Islands, part of a national wildlife refuge.

"The challenge is, are they going to hold up in any kind of serious weather," McKenzie said. "And if there's oil, will the oil overcome the barriers even though they're ... executed well?"

A top adviser to President Barack Obama said Friday that no new oil drilling would be allowed until authorities learn what caused the explosion of the rig Deepwater Horizon. David Axelrod told ABC's "Good Morning America" that "no additional drilling has been authorized and none will until we find out what has happened here." Obama recently lifted a drilling moratorium for many offshore areas, including the Atlantic and Gulf areas.

Two Air Force C-130s were sent to Mississippi and awaited orders to start dumping chemicals on the oil spill. The Navy also sent equipment for the cleanup and Pentagon officials were talking with the Department of Homeland Security to figure out what other help the military could give.

The leak from a blown-out well a mile underwater is five times bigger than first believed. Faint fingers of oily sheen began reaching the Mississippi River delta late Thursday, lapping the Louisiana shoreline in long, thin lines. Thicker oil was farther offshore. Officials have said they would do everything to keep the Mississippi River open to traffic.

The Coast Guard defended the federal response so far. Asked on all three network television morning shows Friday whether the government has done enough to push oil company BP PLC to plug the underwater leak and protect the coast, Brice-O'Hara said the response led by the Coast Guard has been rapid, sustained and has adapted as the threat grew since a drill rig exploded and sank last week, causing the seafloor spill.

The oil slick could become the nation's worst environmental disaster in decades, threatening to eclipse even the Exxon Valdez in scope.

Louisiana's barrier islands - a buffer against hurricanes - its marshlands and more than 400 species of wildlife, including whales, dolphins and the brown pelican - the state bird - are facing a dire threat, CBS News correspondent Mark Strassmann reports from Empire, Louisiana.

CBS Radio News White House correspondent Peter Maer reports that, according to administration officials, 18,180 barrels (763,560 gallons) of an oil-water mix have been recovered from the Gulf, and 98,361 gallons of chemical dispersant have been deployed to break up the toxic sludge.

"It is of grave concern," David Kennedy of the National Oceanic and Atmospheric Administration, told The Associated Press about the spill. "I am frightened. This is a very, very big thing. And the efforts that are going to be required to do anything about it, especially if it continues on, are just mind-boggling."

Oil clumps seabirds' feathers, leaving them without insulation - and when they preen, they swallow it. Prolonged contact with the skin can cause burns, said Nils Warnock, a spill recovery supervisor with the California Oiled Wildlife Care Network at the University of California-Davis. Oil swallowed by animals can cause anemia, hemorrhaging and other problems, said Jay Holcomb, executive director of the International Bird Rescue Research Center in California.

The spewing oil - about 210,000 gallons a day - comes from a well drilled by the rig Deepwater Horizon, which exploded in flames April 20 and sank two days later. BP was operating the rig that was owned by Transocean Ltd. The Coast Guard is working with BP to deploy floating booms, skimmers and chemical dispersants, and set controlled fires to burn the oil off the water's surface.

The leak from the ocean floor proved to be far bigger than initially reported, contributing to a growing sense among some in Louisiana that the government failed them again, just as it did during Hurricane Katrina in 2005. President Obama dispatched Cabinet officials to deal with the crisis.

Cade Thomas, a fishing guide in Venice, worried that his livelihood will be destroyed. He said he did not know whether to blame the Coast Guard, the government or BP.

"They lied to us. They came out and said it was leaking 1,000 barrels when I think they knew it was more. And they weren't proactive," he said. "As soon as it blew up, they should have started wrapping it with booms."

BP shares continued falling early Friday. Shares were down 2 percent in early trading on the London Stock Exchange, a day after dropping 7 percent in London. In New York on Thursday, BP shares fell $4.78 to close at $52.56, taking the fall in the company's market value to about $25 billion since the explosion.

Government officials said the well 40 miles offshore is spewing about 5,000 barrels, or 200,000 gallons, a day into the gulf.

At that rate, the spill could eclipse the worst oil spill in U.S. history - the 11 million gallons that leaked from the grounded tanker Exxon Valdez in Alaska's Prince William Sound in 1989 - in the three months it could take to drill a relief well and plug the gushing well 5,000 feet underwater on the sea floor. Ultimately, the spill could grow much larger than the Valdez because Gulf of Mexico wells tap deposits that hold many times more oil than a single tanker.

Louisiana Gov. Bobby Jindal declared a state of emergency so officials could begin preparing for the oil's impact. He also asked the federal government if he could call up 6,000 National Guard troops to help.