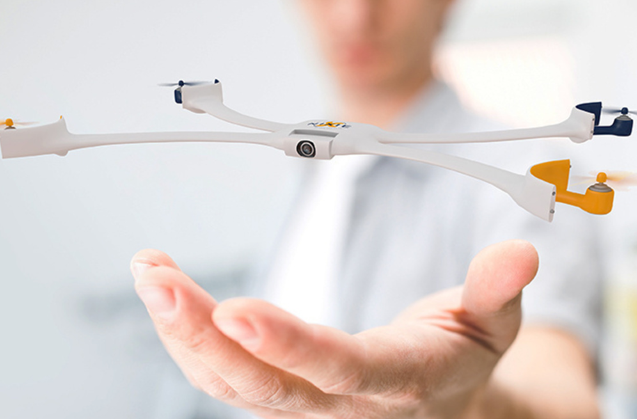 The next generation of wearables is coming and it looks something like this: selfie drones, a bracelet to help menopausal women and a device to nurture premature babies.

All three were vying for a $500,000 prize at Intel's "Make it Wearables Challenge" in San Francisco. Part competition, part entrepreneurial mentorship, the program attracted thousands of participants and then was whittled down to 10 teams that competed for the top prize.

The winner? The wearable drone Nixie, a four-armed copter that is small enough to be tucked into your pocket.

"Whenever you want to take an amazing shot, Nixie unfolds, the entire thing unfolds and it flies to turn around take a photo or video of you and then comes back to you," Jelena Jovanovic, the project manger on Nixie project, told CNET's Sumi Das.

Second place went to Open Bionics, which uses 3-D scanners and printers to quickly create a prosthetics at a fraction of the current costs. Third place went to ProGlove, a wearable glove from Germany that would help with production management.

Among the other eye-catching finalists were Babybe, a bionic mattress from Chile that keeps mothers and their babies connected by mimicking the mother's heartbeat and chest movement when the baby is inside an incubator.

The fan favorite among among the 10 finalists was Blocks, which connects modular units for a customizable device that allows the wearer to swap out blocks as needed.

"Let's say you're an everyday business person," said Hakeem Javaid, a member of the U.K.-based team that developed Blocks. "You can get a fingerprint scanner for secure access to your laptop."

Currently, these devices are only prototypes, though judges said they expect the winning products to start selling within the next year.