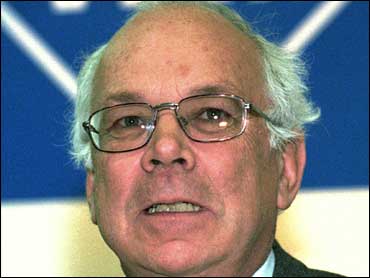 His spirit broken by financial fears, German billionaire Adolf Merckle took his own life this week — becoming the latest high-profile casualty of a global economic crisis that already has claimed the lives of executives in Europe and the U.S.

Merckle, a respected businessmen with a wife and four children, jumped in front of a train in the town of Blaubeuren in southwestern Germany, officials said Tuesday.

His business empire had run into trouble in the crisis, and its problems were compounded by heavy losses in trading of shares in automaker Volkswagen AG. Merckle's business interests included generic drug maker Ratiopharm International GmbH and cement maker HeidelbergCement AG.

Merckle's family said in a statement that "the distress to his firms caused by the financial crisis and the related uncertainties of recent weeks, along with the helplessness of no longer being able to act, broke the passionate family businessman."

Authorities said he left a suicide note, but gave no details. Merckle's death appears to be at least the third comparable suicide in less than four months.

In September, Kirk Stephenson — the chief operating officer of private equity house Olivant — jumped in front of a train at a rail station west of London. The 47-year-old husband and father of a young son stepped onto the tracks, was struck and killed.

A British coroner ruled last month that the death was suicide, though the precise reasons remain a mystery. He left no suicide note.

Two days before Christmas, in New York, Rene-Thierry Magon de la Villehuchet, was found dead at his desk, both wrists slashed and bottle of pills nearby after his fortune and the money of his loved ones vanished along with his clients when he lost $1.4 billion invested with Bernard Madoff.

The Frenchman's fund was among the biggest losers in the Madoff fraud, and one of a handful to get taken for more than $1 billion.

"At first he thought he'd be able to get the money back. He was very determined. Gradually he realized he wouldn't be able to," Bertrand said.

Dr. John D. Lucas, assistant clinical professor at New York-Presbyterian Hospital/Weill Cornell Medical College, said that the men may have "considered themselves to be worth as a human being what they were worth at the bank."

Dr. Charles Goodstein, a psychiatrist at the NYU School of Medicine and past president of the Psychoanalytic Association of New York, said Merckle could may been distraught over other issues.

"We don't know those things, so therefore the economic problems may have been the tipping point and that sent him over the edge," said Goodstein. "To limit it solely to the issue of finance may be a big mistake."