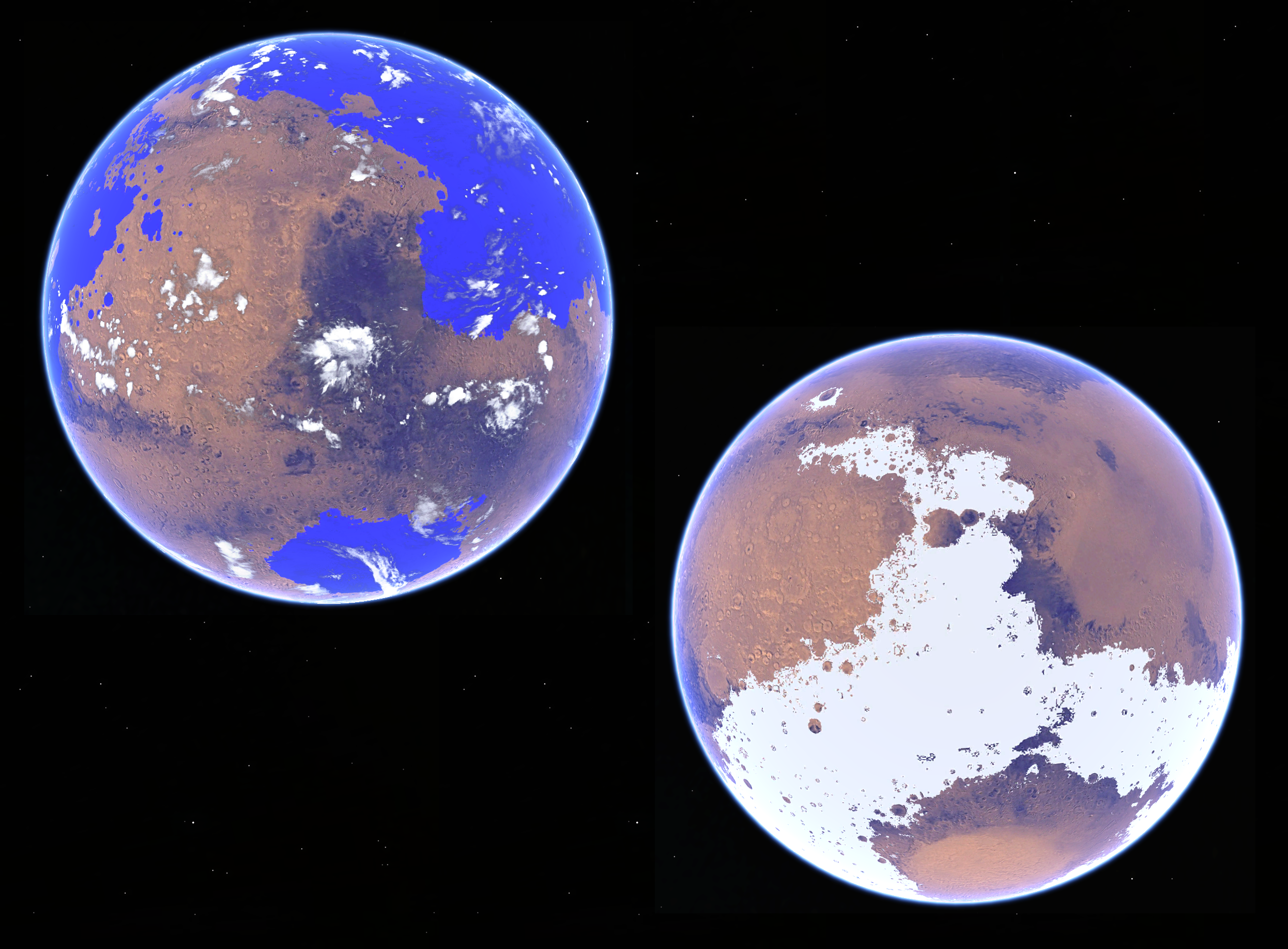 Mars may have been cold and icy three or four billion years ago, rather than a warm and wet placed that could have supported alien life.

That is the conclusion of a new study in AGU's Journal of Geophysical Research: Planets that considered both climate scenarios on the Red Planet.

Using a 3D climate model, the study found that the scenario of a frigid planet where water was locked in ice and temperatures averaged minus 54 degrees made more sense than the wet-and-warm hypothesis, based on what is known about the history of the sun and the tilt of Mars' axis.

Mars only gets 43 percent of the solar energy of Earth, and early Mars was lit by a younger sun believed to have been 25 percent dimmer than it is today.

"Based on our conclusions, it would have been an extremely cold and inhospitable place," said Robin Wordsworth, the study's lead author from Harvard Paulson School of Engineering and Applied Sciences.

"You are thinking less Florida and more, if you are lucky, something like Alaska or probably more like the dry valleys of Antarctica," he said. "Most of the time, very cold, very icy and only intermittent warming caused by events like volcano eruptions or impacts from meteor strikes."

The cold model also did a better job explaining valley networks on the Martian surface - which have puzzled scientists ever since they were discovered by the Viking orbiters in the 1970s - than did a warm model where Mars had an average global temperature of 50 degrees.

An extreme tilt of the Martian axis would have pointed the planet's poles at the sun and driven polar ice to the equator, where water drainage and erosion features are seen today. And under a thicker atmosphere that likely existed under the colder scenario, highland regions at the equator get colder and northern low-lying regions get warmer - the so-called "icy highlands effect" that is responsible for making the peaks of mountains snow-covered on Earth today.

Under the warm/wet model, rain on early Mars was greatest in an area called Arabia and around the Hellas basin, including in the west and southeast areas of the basin, where few water drainage features are found today.

"I'm still trying to keep an open mind about this," Wordsworth said. "There is lots of work to be done. But our results show that the cold/icy scenario matches the surface distribution of erosion features more closely."

The study is the latest to try to understand the role of water on the Red Planet - something that was only discovered in 2013 and is a key ingredient to sustaining life. Among the longstanding questions debated by scientists are whether water existed on Mars and if so for how long.

There is no shortage of studies investigating the presence of water on Mars. Earlier this year, a study claimed glaciers buried beneath its surface contained enough water for the entire planet while another one suggested it has more water than the Arctic Ocean.

Proving that a cold climate on early Mars led to the features seen on the planet today is a "big question," said Bethany Ehlmann, a planetary scientist at California Institute of Technology and NASA's Jet Propulsion Laboratory in Pasadena, California, who was not involved in the new study.

The new paper answers part of that question by showing that locations with snow accumulation in the cold and icy scenario roughly correspond to valley network locations seen today, she said. Further, the model of the cold and icy early Mars shows that some melting of ice would occur, she said.

"We know from rover- and orbiter-based data that there were lakes on ancient Mars," she said. "Key questions are: How long did they persist? Were they episodic or persistent? And does the feeder valley network demand rain or is snow and ice melt sufficient?"

Wordsworth agreed there probably was water at some point in Mars history, given the valleys, which would appear to be carved by liquid water.

"There had to have been liquid water flowing at some point on Mars' surface," he said. "But the question is not if there was liquid water but how long those periods, where it was warm enough for water, were. The two possibilities are that it was warm and wet like Earth today or mainly cold and icy with only episodic bursts forming where you get melting of snow and ice that carved the valley networks."

And what do these new finding say about life on the planet?

Wordsworth said their study "doesn't rule out" the possibily of life on Mars but he suggested that scientists take a different approach to finding it.

"We see on Earth today, even in places where you couldn't get anything surviving like regions of Antarctica, you still get microbes flourishing at the subsurface," he said. "So, if we want to search for life on Mars, looking in subsurface regions of future missions is an important thing to consider."