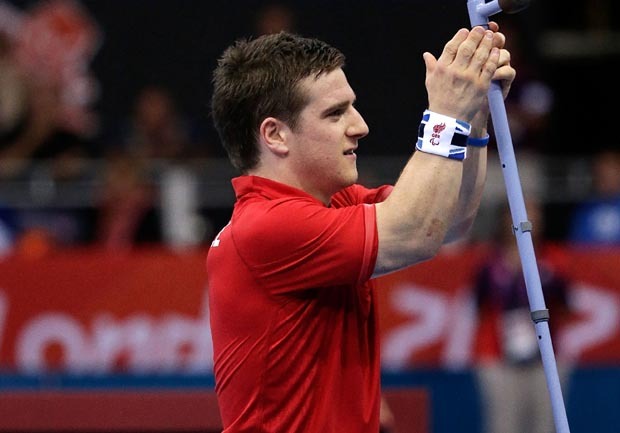 (CBS/AP) LONDON - With one diving cross-court winner at the London Paralympics, a crutch-holding British table tennis player has become an internet sensation.

A clip of David Wetherill's outrageous shot in his match against Thomasz Kusiak of Germany has received more than 3 million hits on YouTube.

"My biggest concern was that I looked like some silly little disabled boy rolling across the floor," the 22-year-old Wetherill said on Thursday. "But that doesn't seem to have been the case."

Wetherill lost to Kusiak in last week's match, denying him a place in the quarterfinals, but his top-spin forehand will go down as one of the highlights of the London Games.

It looked as if Kusiak had the point sewn up when he prodded a shot into the corner, with the ball spinning away from his opponent.

Wetherill, who was born with a condition which restricts the growth of some bones and joints and holds a crutch in his left hand during matches, was off balance and appeared to be struggling to reach the ball.

However, he dived to his right and managed to send a return with heavy topspin across the table and past Kusiak.

While the German walked to retrieve the ball, Wetherill rolled over before lying on the floor with his crutch still in his hand, looking at his coach in amazement.

Wetherill later tweeted: He got more than a few YouTube hits. The clip has nearly 3.3 million views and climbing.

"I grew up watching these sorts of shots on YouTube, and now I am in one of them - it feels incredible," Wetherill said. "Firstly, it is great for the Paralympics and for table tennis. Hopefully it will show people that the games are exciting, and that the skill level is often right up there with the Olympics.

"People have said the shot was inspirational. It is not my place to say, but it is great to hear if that is the case."