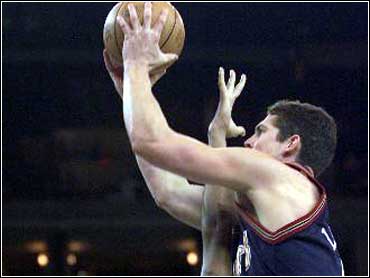 The Warriors withstood a 30-point game by Denver's Antonio McDyess and held the Nuggets scoreless in the last 2:55, making up a six-point deficit.

Jason Caffey added 17 points, Vonteego Cummings had 16 and Donyell Marshall and Mookie Blaylock each had 14 for the Warriors, winners of six of eight since snapping a 12-game losing streak.

Marshall, who had 12 rebounds, also produced the game's biggest defensive play when he blocked Raef LaFrentz's layup attempt with 33 seconds remaining. George McCloud missed a 3-point try in the final seconds and Bryant Stith's rebound and putback attempt rimmed out as time expired, leaving the Nuggets with their eighth straight loss on the road and ninth straight defeat in Oakland.

LaFrentz and Nick Van Exel added 12 points apiece for Denver, which missed a chance to win away from home for the first time since Dec. 11.

Blaylock pulled up for a 15-foot jumper to tie it at 94 with 4:22 remaining, but McDyess answered with a baseline jumper, triggering a 7-1 burst that put Denver up 101-95 with 2:55 remaining. The sequence also included McDyess grabbing an offensive rebound and passing to LaFrentz for a dunk, and Van Exel hitting a 3-pointer and then skipping a couple steps n celebration.

But it was premature.

Caffey drove in for a layup and Jamison tipped in his own miss and hit a short baseline floater to even it at 101 with 1:14 left.

After Van Exel missed an 18-foot jumper, Jamison finished a fastbreak with the go-ahead layup.

Trailing by three at the break, Golden State pulled into a 64-64 tie on a 3-pointer by Starks and held a one-point advantage heading into the final period.

Golden State opened a nine-point lead on Cummings' 18-foot jumper midway through the second but the Nuggets came right back, getting a 3-pointer from Van Exel to start a 10-3 spurt leading to a 41-all tie.

A layup by McDyess, who had 20 of his points in the first half, and Van Exel's long jumper in the final seconds of the second put the Nuggets up 50-47 at halftime.