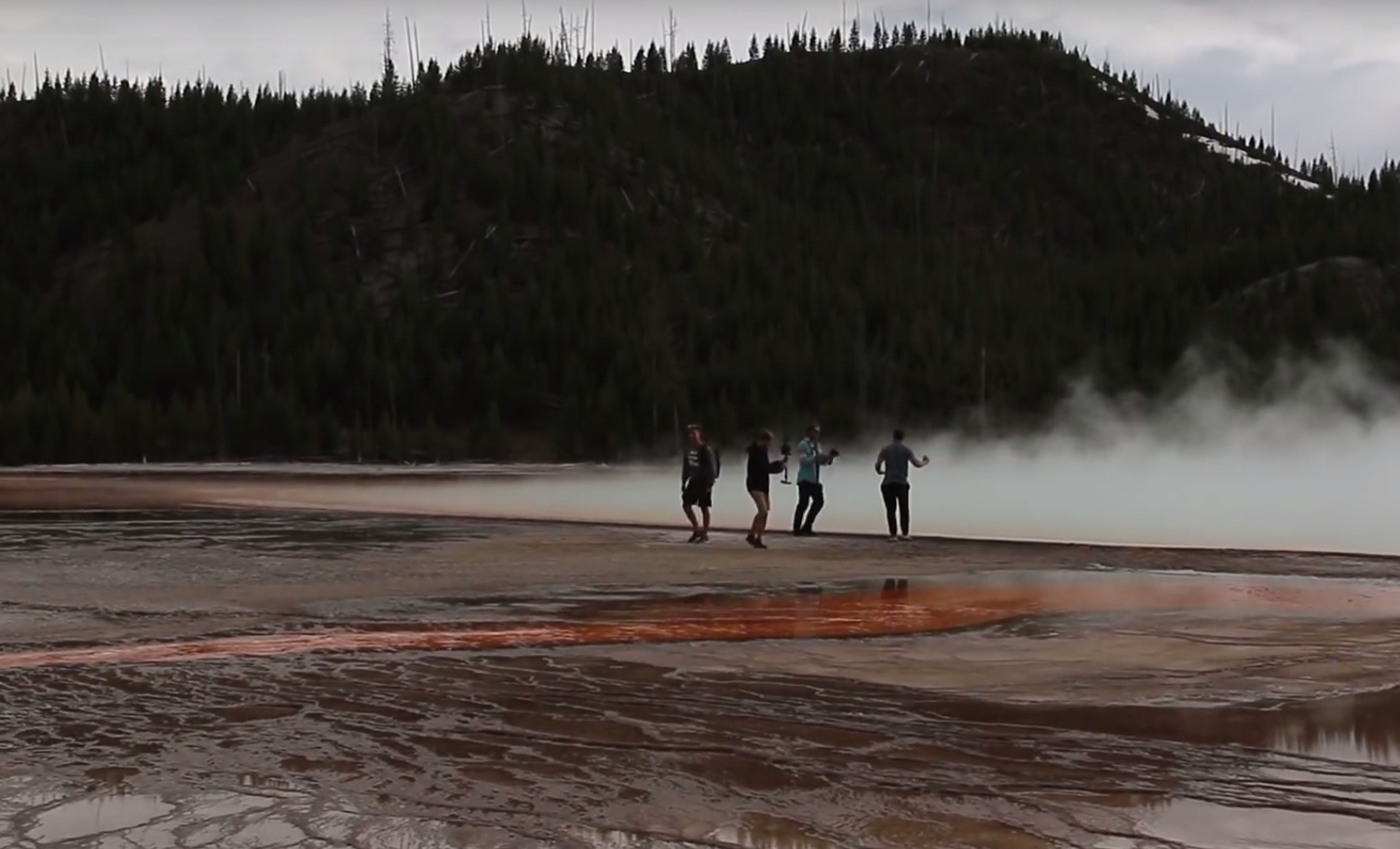 CHEYENNE, Wyo. -- In the latest episode of tourists disturbing wildlife and sensitive geological sites in a national park, a group of men who post pictures and videos of their travels on social media are in hot water for walking onto a sensitive hot spring at Yellowstone National Park, snapping selfies and dipping a hand into water that can reach the boiling point.

The incident occurred days after a Yellowstone visitor violated park rules by loading a bison calf into his vehicle out of concern it needed help. Park staff later had to euthanize the animal after it was rejected by its herd. Other national parks have faced issues with tourists as well -- in Death Valley, a group of drunken men killed a rare fish in and someone marked an arch at Arches National Park in Utah with graffiti.

Yellowstone spokeswoman Charissa Reid said that based on her observation there are more instances of park visitors getting into trouble because they are looking to get their video and pictures out on social media. "I think it's a pretty big problem," Reid said Tuesday.

John Powell, spokesman for the U.S. Attorney's Office in Cheyenne, said people taking pictures of themselves violating park rules and posting them on social media can be a "double edged sword" because others, including rangers, see it.

"It comes back to haunt you," Powell said Tuesday.

At Yellowstone, rangers filed a criminal complaint Monday against three members of the group known as High on Life SundayFundayz for stepping onto a geothermal feature.

The group has posted an apology on its website and social networks for leaving the boardwalk path that visitors are required to stay on to protect both tourists and sensitive hot springs.

They have offered to donate up to $5,000 to the park. The group removed photos and video showing some of them touching the hot water at the Grand Prismatic Spring over the weekend.

The criminal complaint was filed against Charles Ryker Gamble, Alexey Andriyovych Lyakh and Justis Cooper Price-Brown. Witnesses and video posted on the Internet show four men going about 25 yards off the boardwalk, according to the complaint.

Only three were charged because rangers were still trying to positively identify the fourth person involved, Reid said. The apology posted on the group's web page and other social media accounts listed "Ryker, Alexey, Justis and Parker" as signing off on the apology.

Messages to the group seeking comment about the matter were not immediately answered Tuesday.

The group describes itself as friends from Vancouver, British Columbia, who have established a clothing line and have a "good time" making videos, according to their web site. The High on Life moniker is the name of their clothing line and also signifies the "attitude to embrace all of life's opportunities with a positive outlook and energy," it said.

The posted apology said the group made a "wrong decision" when they sought to take pictures and video of the Grand Prismatic Spring, the largest in Yellowstone at 370 feet in diameter and more than 120 feet deep.

"We got over zealous in our enthusiasm for this wonderful place," it said in part. "When standing at the face of such natural wonder, we were drawn to it. In an attempt to get the perfect shot, we acted in a way that doesn't reflect our respect for the environment we were trying to capture."

Witnesses reported the incident to rangers and provided pictures of the large recreational vehicle the group traveled in. The vehicle, with British Columbia license plates, is registered to Charles Gamble, according to the complaint.

Yellowstone distributes literature to visitors and posts signs around geothermal features warning people not to stray off boardwalks and paths.

Just days before, Yellowstone rangers cited Shamash Kassam, of Quebec, for loading a bison calf into his vehicle on May 9 because he was concerned for its welfare. The calf had to be euthanized because the mother and herd would not take it back and it would have died on its own.

Reid said the top two citations issued by park rangers are for getting too close to wildlife, followed by not staying on established boardwalks and trails.

Five visitors were seriously injured last year in Yellowstone after getting too close to bison. In one case, a bison flipped a woman into the air as she posed for a selfie with the massive beast.