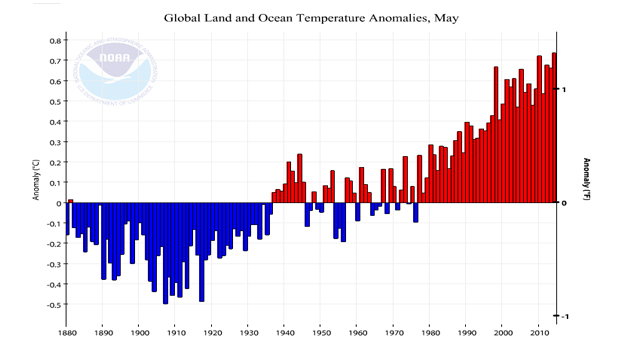 Driven by exceptionally warm ocean waters, Earth smashed a record for heat in May and is likely to keep on breaking high temperature marks, experts say.

The National Oceanic and Atmospheric Administration Monday said May's average temperature on Earth of 59.93 degrees Fahrenheit (15.54 degrees Celsius) beat the old record set four years ago. In April, the globe tied the 2010 record for that month. Records go back to 1880.

May was especially hot in parts of Kazakhstan, Indonesia, Spain, South Korea and Australia, while the United States was not close to a record, just 1 degree warmer than the 20th century average. However, California is having a record hot first five months of the year, a full 5 degrees above normal.

Georgia Tech climate scientist Kim Cobb and other experts say there's a good chance global heat records will keep being broken, especially next year because an El Nino weather event is brewing on top of man-made global warming. An El Nino is a warming of the eastern tropical Pacific Ocean that alters climate worldwide and usually spikes global temperatures.

Ocean temperatures in May also set a record for the month. But an El Nino isn't considered in effect till the warm water changes the air and that hasn't happened yet, NOAA said.

With the El Nino on top of higher temperatures from heat-trapping greenhouse gases, "we will see temperature records fall all over the world," wrote Pennsylvania State University climate scientist Michael Mann in an email.

May was 1.33 degrees (0.74 degrees Celsius) warmer than the 20th century world average. The last month that was cooler than normal was February 1985, marking 351 hotter than average months in a row.

This possibly could quiet people claiming global warming has stopped, but more importantly it "should remind everyone that global warming is a long-term trend," Princeton University climate scientist Michael Oppenheimer said.

This Spring, lasting March through May, was the second warmest on record globally, behind only 2010.